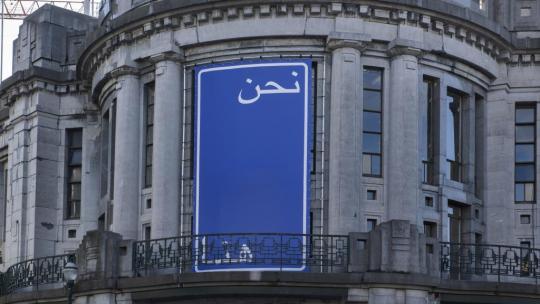 We Are Here
Bozar - Centre for Fine Arts, Bruxelles

Bozar’s façade displays a huge sign. Its blue is the same colour as the road signs in Brussels that indicate where you are, which way to go, and the distance. It is also the same blue as the European Union’s flag. A sentence written in Arabic states “We are here”.
Through this deceptively simple statement, artist Emily Jacir challenges the notion of two distinctly different spaces constituting a “Europe” and an “Arab world”. On her site visit to Brussels, she discovered that she was able to navigate the entire city speaking only in Arabic. Dar Jacir for Art and Research, an artist-led space that she founded in Bethlehem was registered officially as an AISBL here in Brussels three years ago, yet no bank will open an account for them. The question of who has the power to control culture reveals itself.
As the war in Ukraine continues and Bozar flies its flag in solidarity, Emily Jacir reminds us that Palestinian refugees, one of the largest and longest standing in the world, are still waiting to return home.