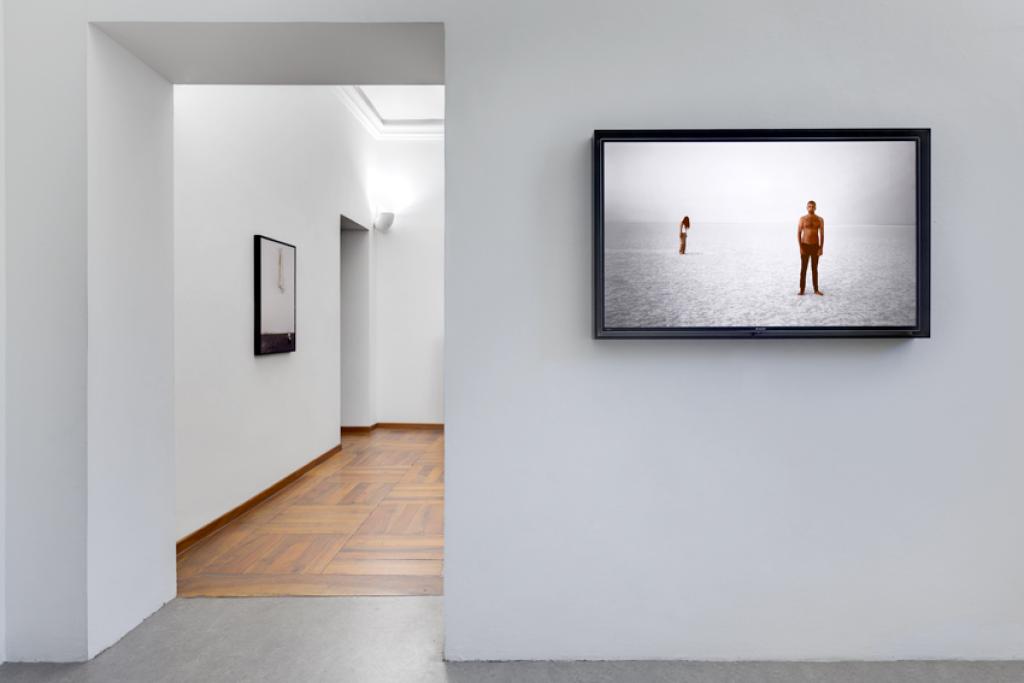 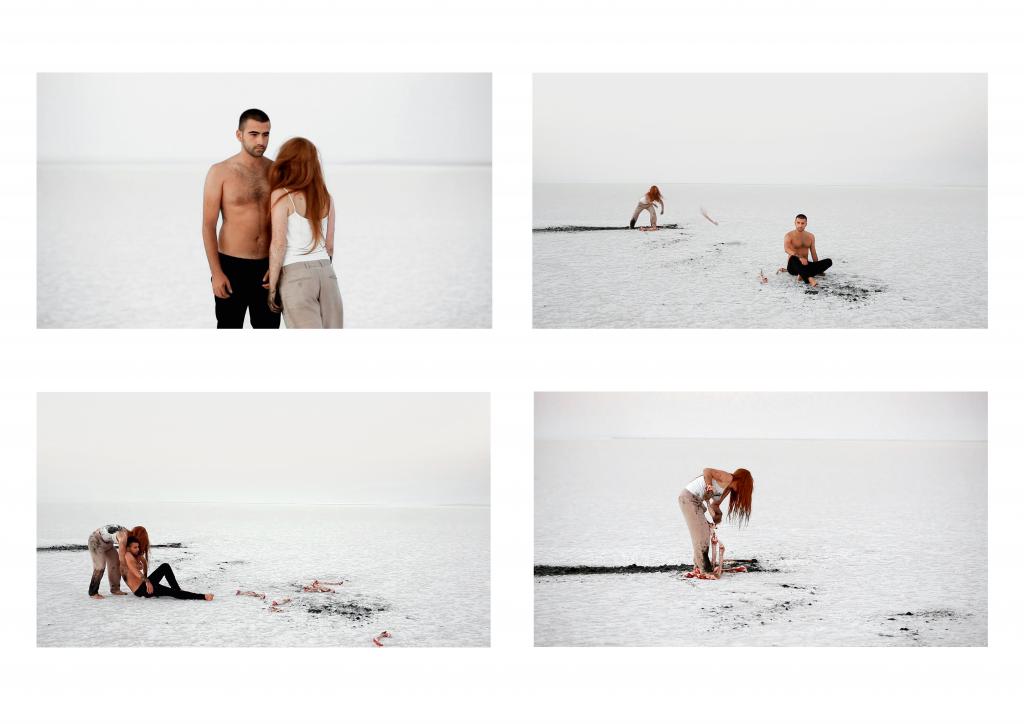 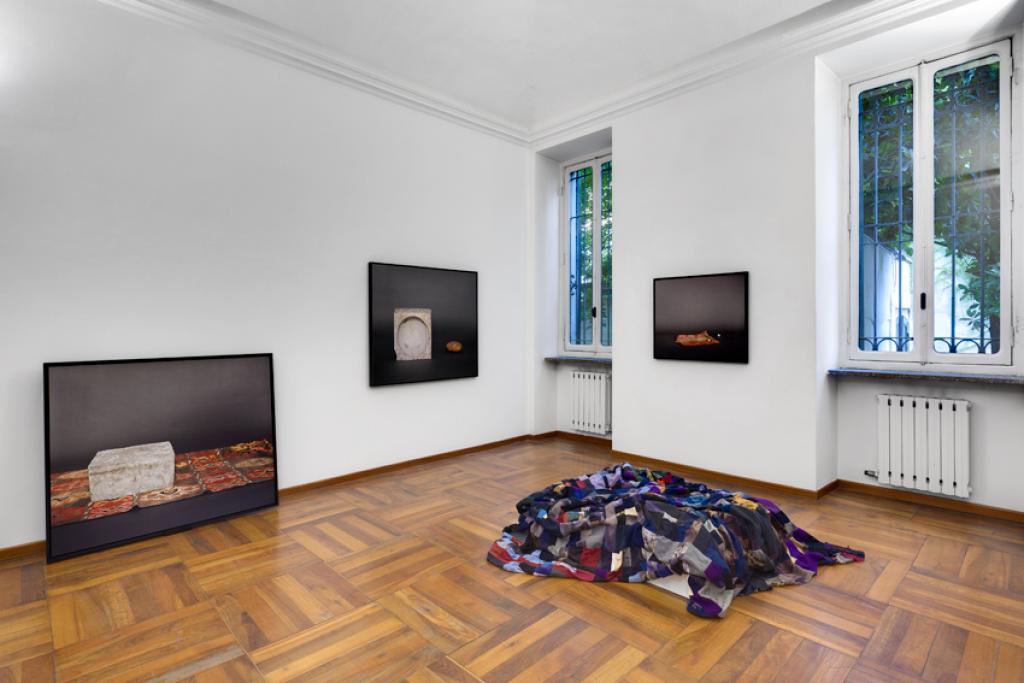 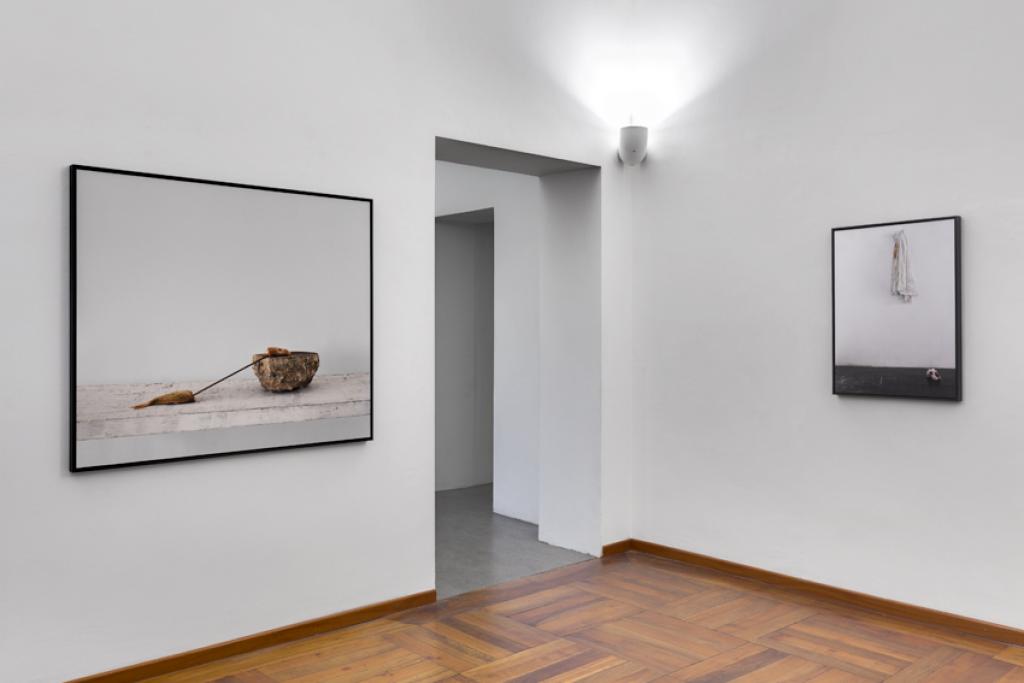 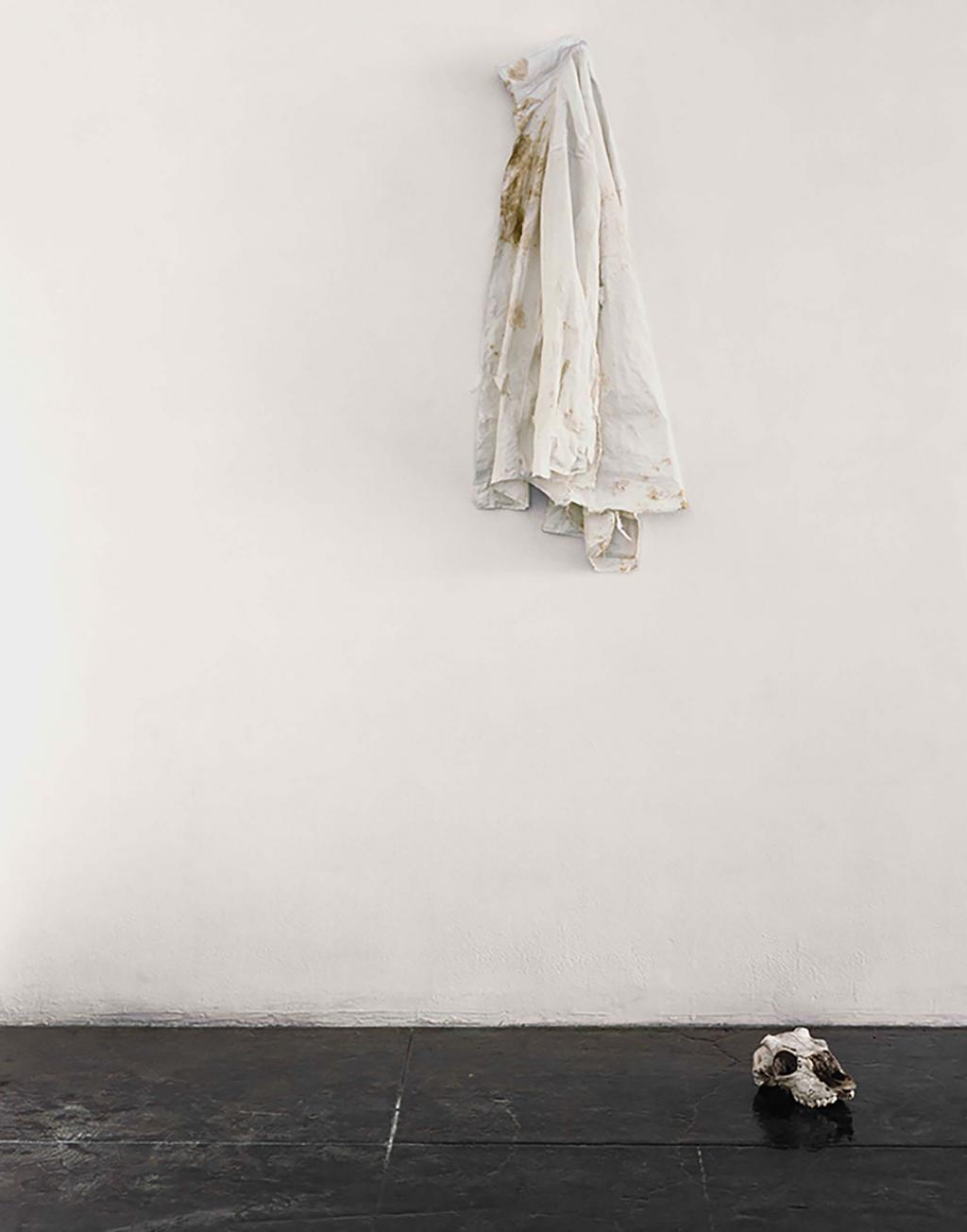 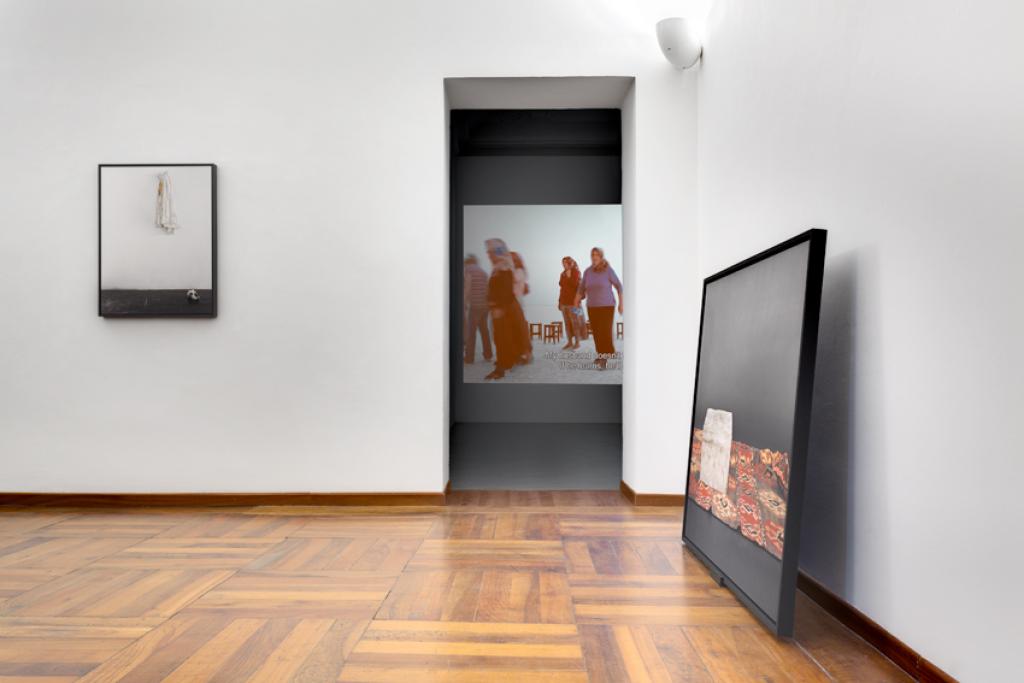 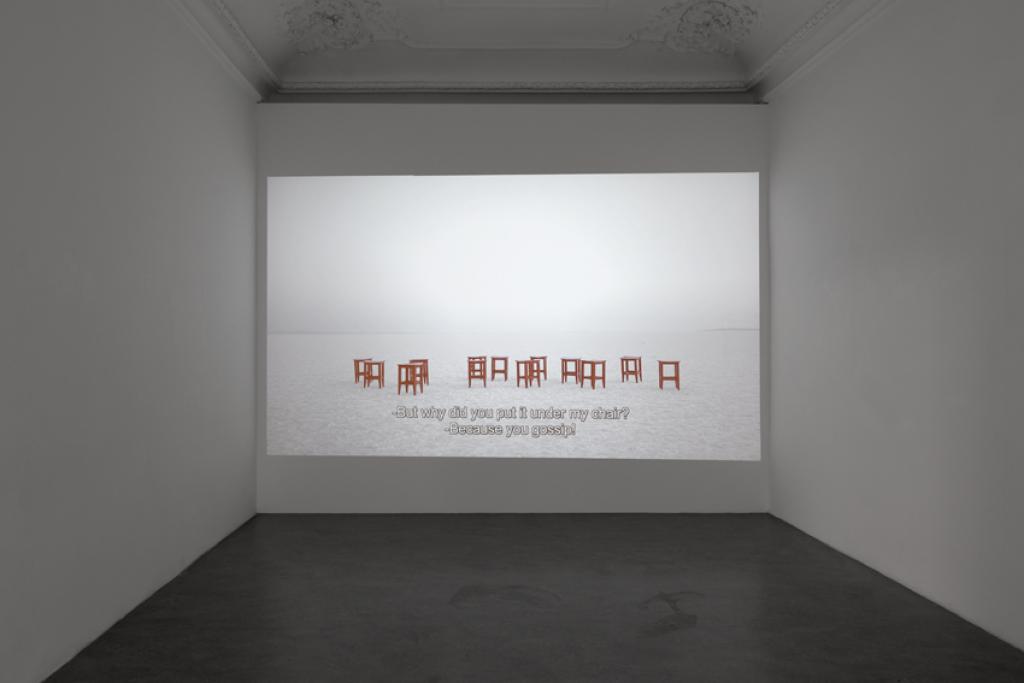 Nothing is in its own place

Born in eastern Turkey and identifying as both Kurdish and Turkish, Fatma Bucak creates art that continues a life-long negotiation and interrogation of the ideological and conceptual conditions of border landscapes. Her films, photographs, and installations emerge from and perpetuate the liminality of borders. The title of her exhibition Nothing is in its own place speaks to her confrontation of the contingency of border spaces and the tenuous interdependency that resides within them.

As a space between states, border landscapes are often treated politically as non-states – a situation that has profound social and political implications for the lives of people moving through, along, and living within them. Borders, for Bucak, can be social, political, ethical, interpretive. They are a state between states – an expansive threshold where we are neither one nor the other. They are both mental and material realities where the conditions of life are distinct but highly dependent on the entities on either side.

The lives of people implicated in borders are the subject of Bucak's work. More than subjects however, they are also collaborators and participants throughout her projects. Developing out of conversations with the communities implicated in the negotiation of border spaces, Bucak's projects are an attempt at self-determination and empowerment through the making of images and objects. In the artist's words, "this is where we create our own order." The photographs, films, and installations she constructs with her collaborators are, for Bucak, an emancipatory act – both a documentation of conditions and a metaphorical language that shifts the terms that are imposed on life in border spaces.

The works exhibited at Alberto Peola bring together the output of her time working with and within the communities of the Turkish-Armenian border, the Armenian-Iranian border, central Anatolia, and the Texas-Mexico border. Rather than present each project as a distinct body of work, Bucak has chosen to display the works from these different situations as one installation, moving through three spaces. As you enter the gallery, you are confronted by a static shot of an indeterminate landscape – stark white – perhaps ice, perhaps salt. A female figure enters the frame holding a pickax. She digs a hole revealing black earth that sharply contrasts with the expanse of white in front of you. The sound of the female figure's labor hangs in the room, while across the gallery, faint sounds of talking and laughter entreat you into the next room.

In the second space, Bucak presents a group of still-life photographs and an installation of a fabric quilt. The photographs each present arrangements of objects from the border spaces in which she has worked – a rug and two eggs, a rug and a stone, a fish with concrete and rebar, white fabric and a skull, bread and a stone. The quilt is made from clothes left by migrants along the Texas-Mexico border – gathered and made in partnership with members of the local migrant communities. The quilt and the images are documents of research – the artist's attempt to process the material realities of the situations she has encountered. Precise in their arrangement and caring in their aesthetic, the images are at once both beautiful and perplexing, leaving the viewer to resolve the metaphorical language she is developing while the sound of talking and laughter comes closer and becomes louder.

Entering the third space, the viewer is met with a large projection of another stark white landscape – this one is occupied by a group of thirteen women looking back at the camera and at the viewer. Speaking in Turkish, the women talk amongst themselves sounding perplexed at times, laughing at others. One says "what do you think she is doing?" The viewer is left to interpret what they are watching and what their utterances may mean. As their conversations continue, it becomes clear that this is the same stark white landscape as in the film displayed in the first room of the exhibition. The women are watching the same performance – interpreting it, enjoying it.

The two films And then God blessed them (2013) and Suggested place for you to see it (2013) are in fact a two-channel installation work by Bucak set on Tuz Gölü, the Salt Lake, in central Anatolia. In separating the two channels of the cinematic diptych, Bucak has placed the viewer in an ambiguous borderland where they can never see both sides at the same time. In this liminal zone she has offered her photographs and a quilt, inviting viewers into the process of rendering new metaphorical meaning. Nothing is in its own place is a considered and bold welcoming by Bucak for us to enter into the spaces of borders. Her works are generous, fixed points within the transitional, fluid, and liminal threshold of border landscapes.