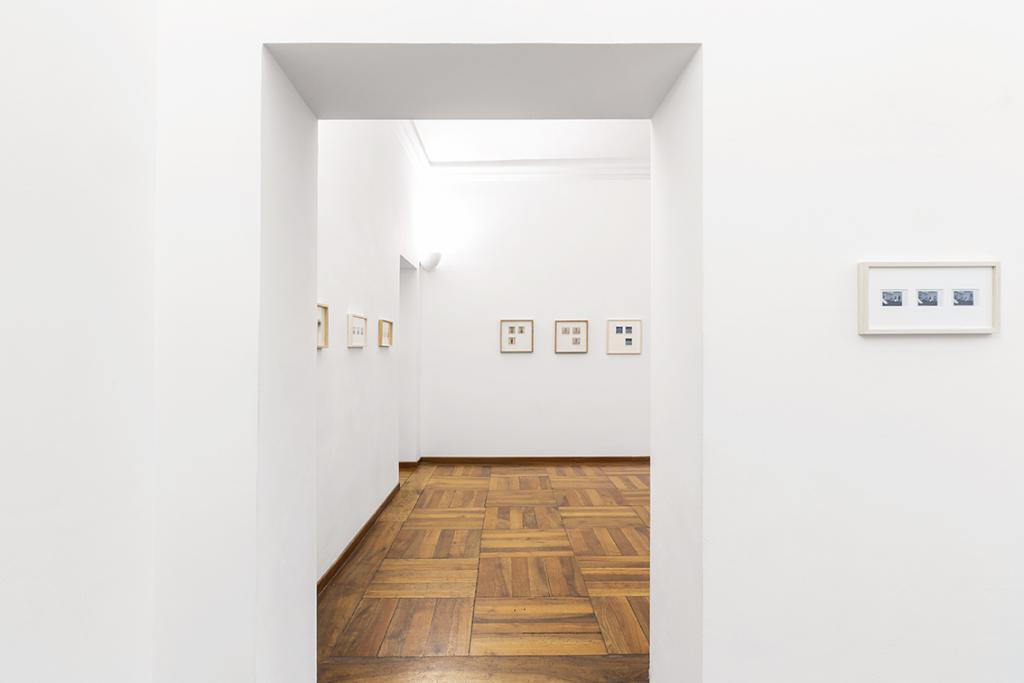 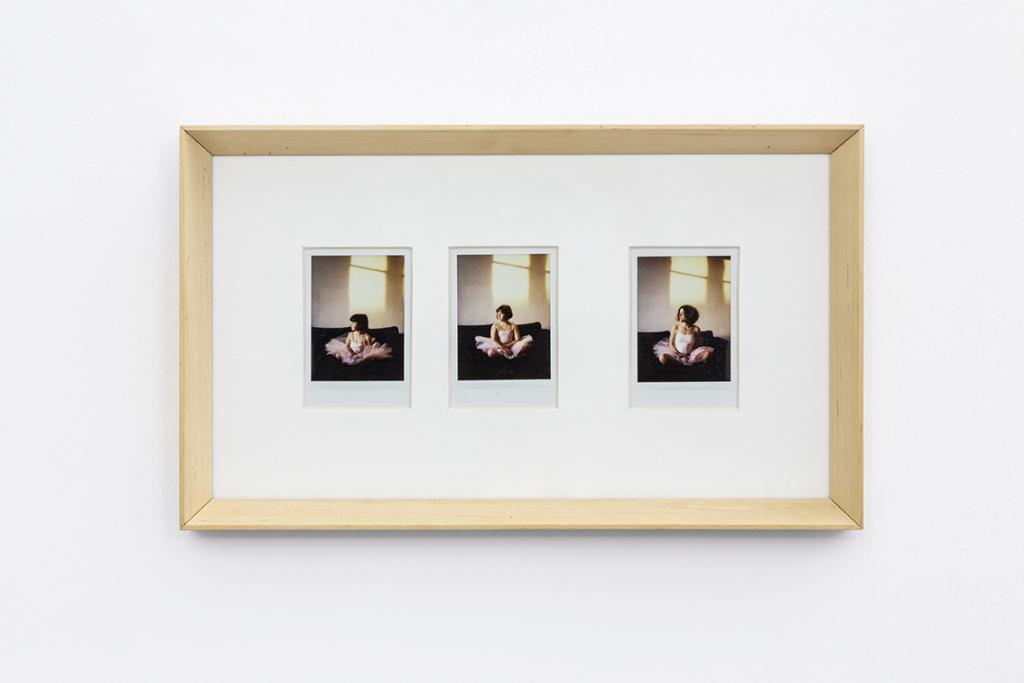 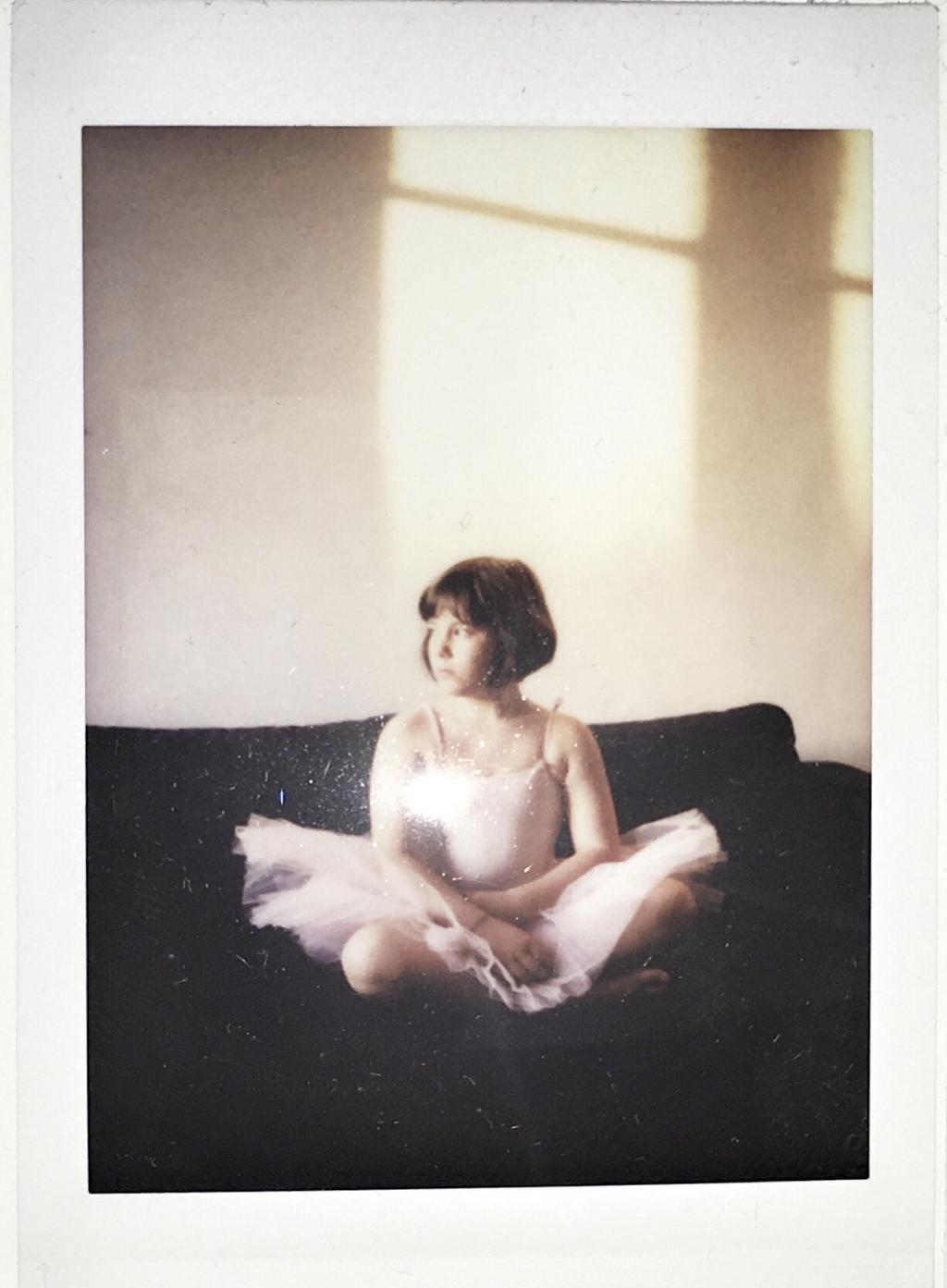 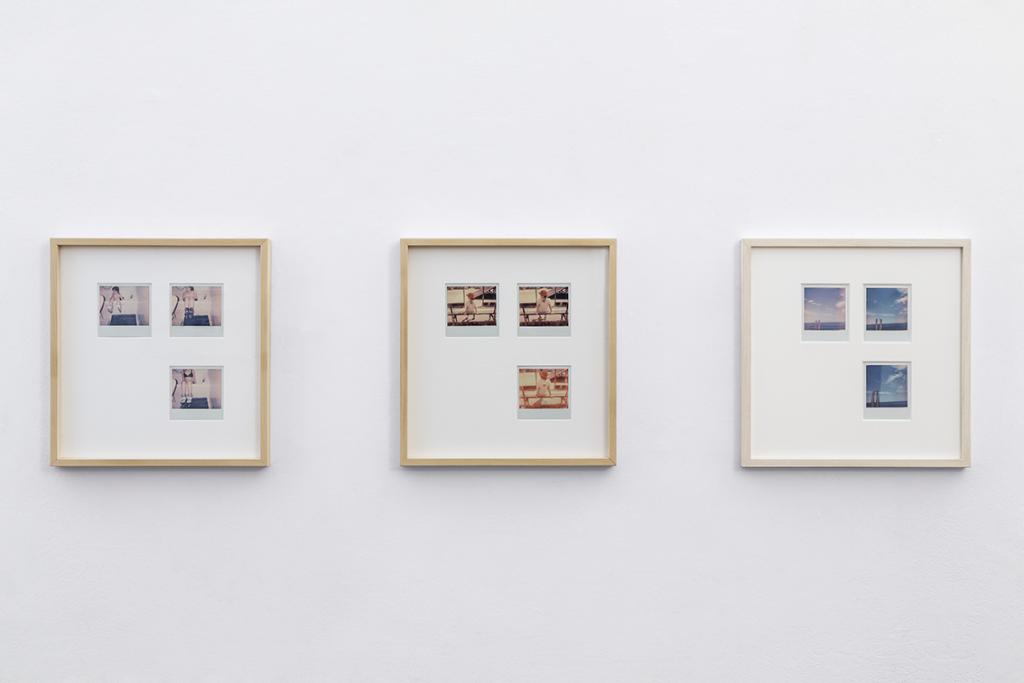 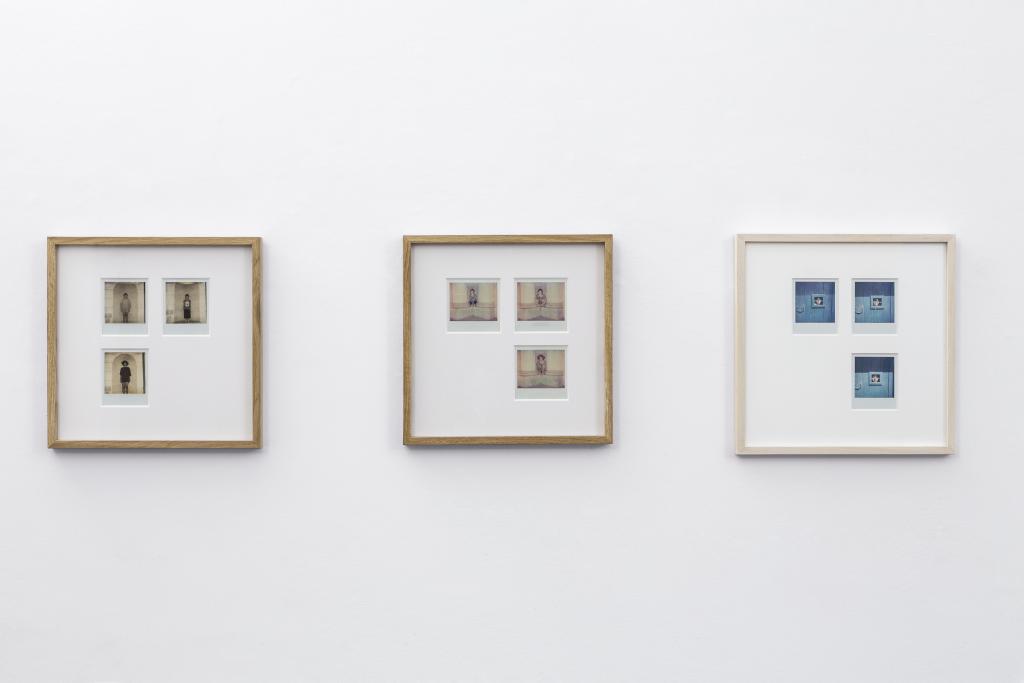 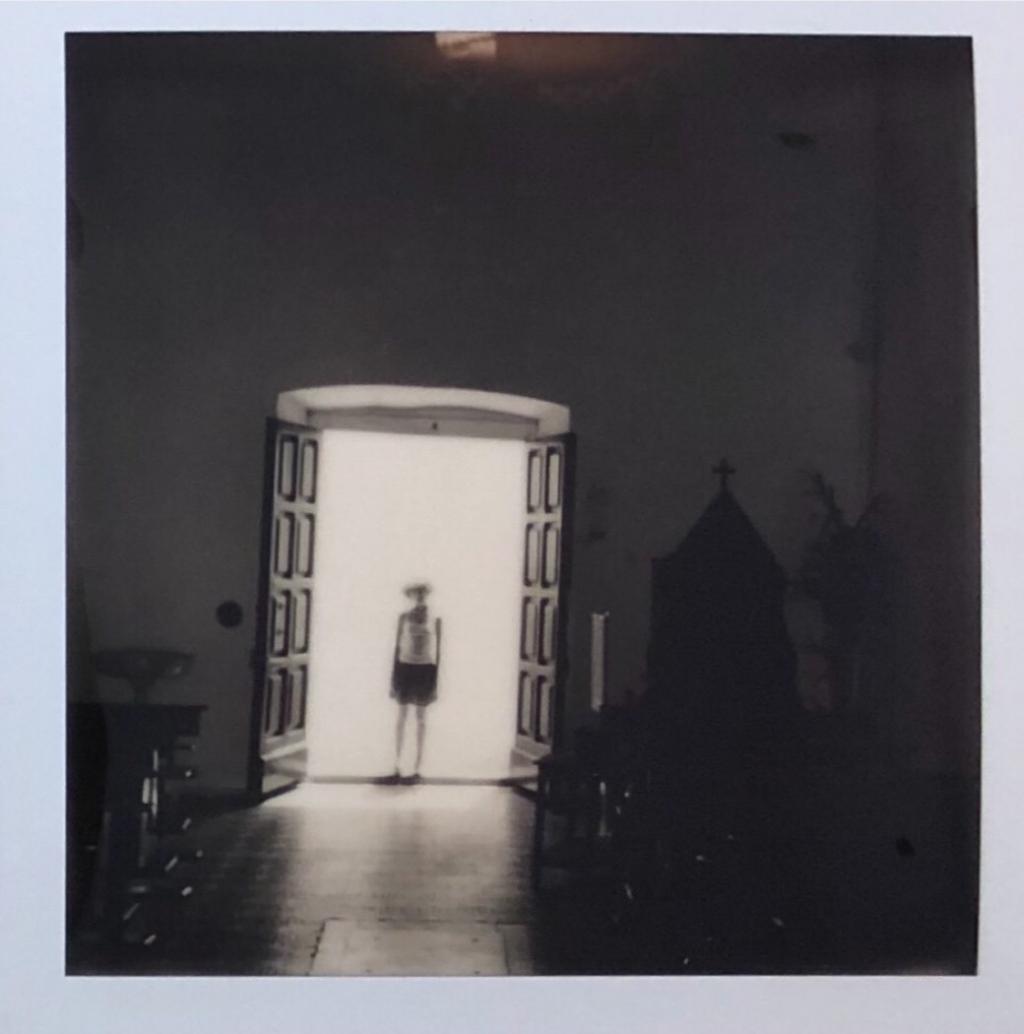 A cycle of photographs entitled Private Memories, comprising twenty different assemblages of three snapshots – plus one consisting of four snapshots, showing three subjects in a setting and one scenery without a figure – taken with a Kodak Instamatic, a Polaroid 600 or a Polaroid Spectra, as appropriate.
The photographs, taken in the course of two years, are unique samples selected from among a series of similar photographs, all invariably showing the author’s daughters Nina, Zoe and Phoebe – today aged 17, 10 and 7.

Exactness and indeterminacy are the distant poles – in this case, the final ends of two diverging trajectories that depart from the same origin - between which Simone Mussat Sartor’s twenty ‘private memories’ fluctuate.
Here exactness underlies – or is present as a watermark – the project of the snapshot, manifesting itself in an invisible texture of preparatory markings, ideal geometric lines which work as a sinopia of the composition. In the attempt to portray the various subjects in the selfsame here and now, through the repetition of an identical pose, unchanged and established with pinpoint accuracy, in the same setting and the same attire, each photograph bears witness to a self-conscious quest for exactness, which speaks to an obsessive effort – or need – to keep everything under control, from the camera angle to the postures of the three distinct silhouettes.
The final snapshot, thought out in utmost accuracy, testifies to an overt pursuit of precision which reveals itself most powerfully when we compare and contrast the images forming the triptychs.
Indeterminacy is present in the shot – in fact, more precisely, it emanates from it as one of its incidental, albeit pervasive, properties. Its technical rationale being the nature of instant development, indeterminacy displays itself through a distinctly vague halo, an undefined milky fading effect – occasionally combined with a minimal hint of a stain or a smear – which plunges the image in a suspended, dream-like time, partly diluting the outlines of the figures and the tones of the colours.
It is in the distance between the diverging ‘trajectories’ of exactness and indeterminacy that a palpable tension is generated, which goes some way to aesthetically characterizing this cycle of photographs. It is in this contrast between antithetical qualities that the predominant – and subtly disturbing - visual feature of the project comes into being, that slightly liquid timbre that pervades the general atmosphere and sets the temperature of these images.

Within this atmosphere – or, rather, within this landscape – in the space accurately defined and outlined by the white frames of the Instamatic and Polaroid devices, the theme of memory comes to the fore. As the title suggests, these are memories of moments in which the subjects - Nina, Zoe, Phoebe and Simone, the author’s father, who directed the scenes and took the snapshots – shared a time and a place. There is the idea, and possibly an explicit desire, to freeze a moment, to not forget, but the whole thing is designed to cut out and capture from the rapid flow of change something which cannot feature in the photograph, as it pertains to the invisible trace of the sisterly attachment or, more generally, of the family bond. Looking at the shots, the viewer senses a connection, a mutual correspondence between the subjects: something suggests there might be lines connecting these ‘vertexes,’ as when we draw the outlines of the constellations by connecting the points of the single stars or the sea routes between the islands in an archipelago.
In this metaphor, the photograph can be likened to a document comparable to a celestial or a nautical chart, a map which indicates, explains and offers itself to interpretation. To misquote Wittgenstein – “When you see the eye, you see something coming out of it. You see the gaze of the eye.[1] What comes out of these portrayed bodies seems to be an idea of, or a bid for, a reciprocated relationship between kindred spirits. In these virtual triangles – abstract but immanent - lies the poetic account of a private relationship. Or, even more than that – a texture of relationships.

These photographic tokens can be characterized as portraits. The three recurrent subjects are portrayed while posing in a variety of settings and from different angles. For instance, their faces through the small window of a wooden front door painted blue; their full-length silhouettes, against the light, on the threshold of a church; their legs, like vertical lines in front of a sea horizon.
The direction the subjects are looking varies – at times they look at the photographer, at other times they look outside the frame or somewhere else. However, it is exactly the presence of these subjects and their reciprocal interplay of mutual correspondences that is central in these images.
These portraits do not revolve on the definition of the individual person. Through the figures they represent, they holistically express a sentiment: ‘The portrait does not conjure up a (memorable) identity, any more that a (non-memorable) intimacy.’[1]
Children are, in part, also our own image, our projection, the reflection of our face – more or less similar to it - which is invisible to us, unless it encounters its reflection in a mirror.
‘I “resemble myself” only in a face which is always absent and outside myself, not as a reflection, but as a portrait placed in front of me, always ahead of me. The portrait portrays this being ‘ahead of me,’ like the bow of a ship that cuts through the waves leaving the fine wake of a “self” that presently disappears.’[2]

Nina, Zoe and Phoebe carry the genetic legacy of their father, ‘replicants’ of some of his physical as well as psychological traits.
Between them and the man behind the camera, at the time of the shooting, there exists an unobstructed area where we could track an ideal, unsubstantial symmetry axis which allows us to imagine a mutual mirroring of the subjects inside the frame, and, simultaneously, where something like a transfert could happen between them.
The photograph resulting from this correlation represents a further outcome of a symmetry-driven exploration, since it is there that the individual ‘presences’ of the one who is making the portrait and the one who is being portrayed intermingle and coalesce.
In this process, the loss of the unity of the subject, as well as the proliferation or multiplication inherent to filiation stand out as the main issues: ‘Next to each particle of human conscience, a symmetry axis can be placed, so that the reflection of that particle appears on the side opposite the axis. Both parts, the image and its reflection, form a new particle of conscience next to which a new axis can be placed again. […] Thus, next to each side of each symmetry axis, a reflected entity arouses, next to which new symmetry axes burst into shape, over and over again, ad infinitum.”[3]
Simone Mussat Sartor’s private memories, by reproducing themselves through snapshots, represent an original visual atlas: its images, simultaneously exact and indeterminate, arranged in triptychs and realized in their impalpable watery nuances, stage a delicate, precious intimacy, making use of an expressive grammar which reveals a unique emotional and sentimental charge.