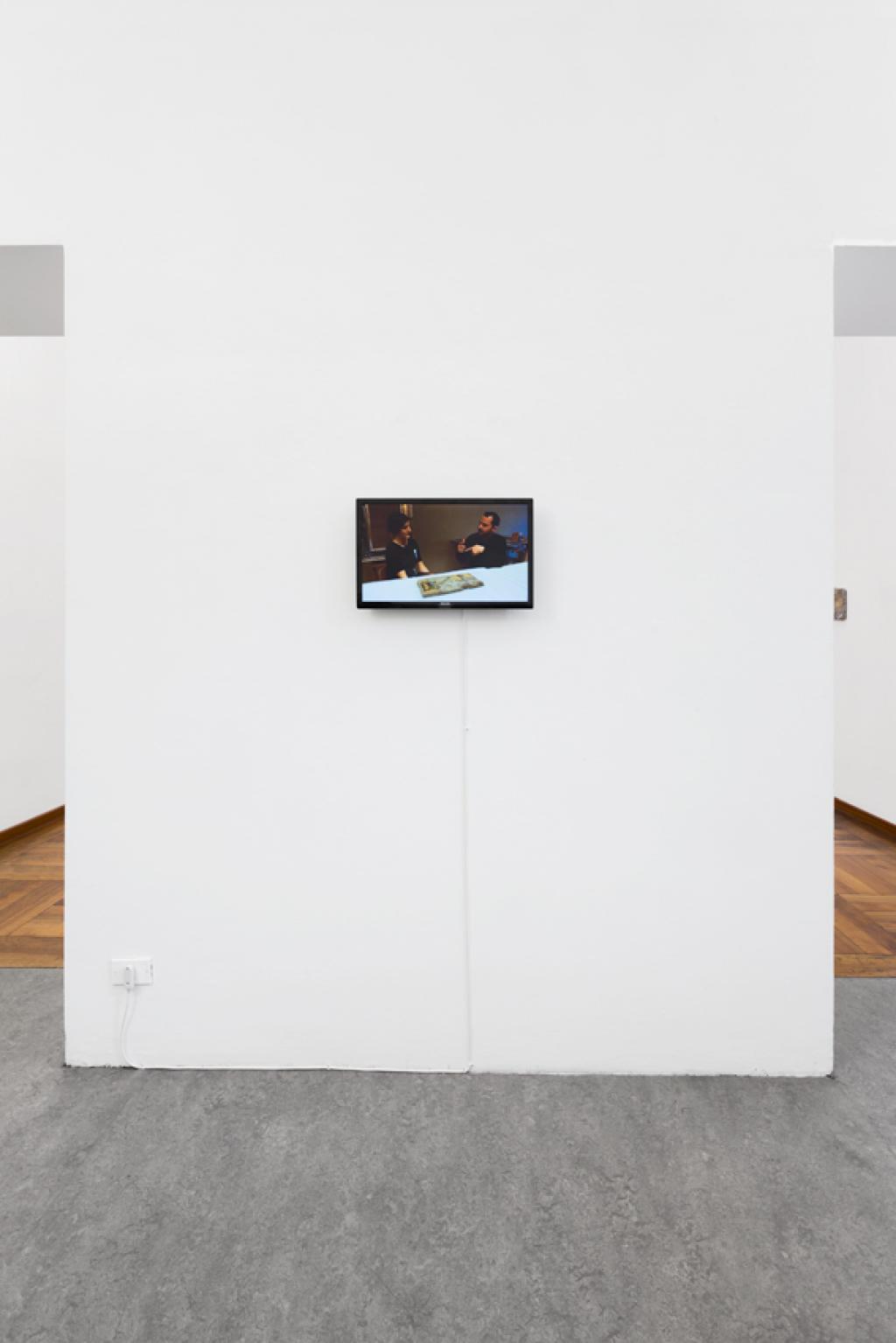 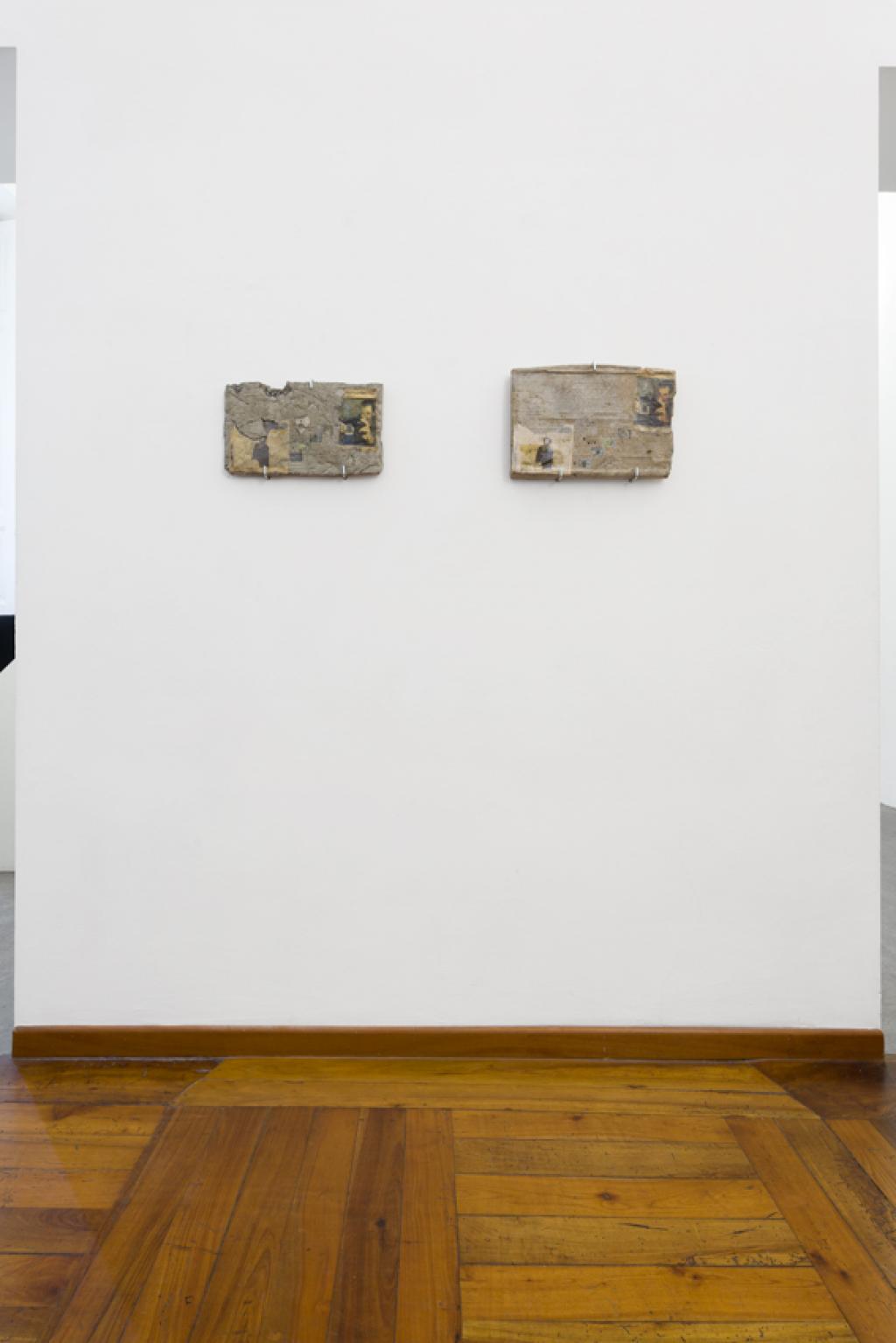 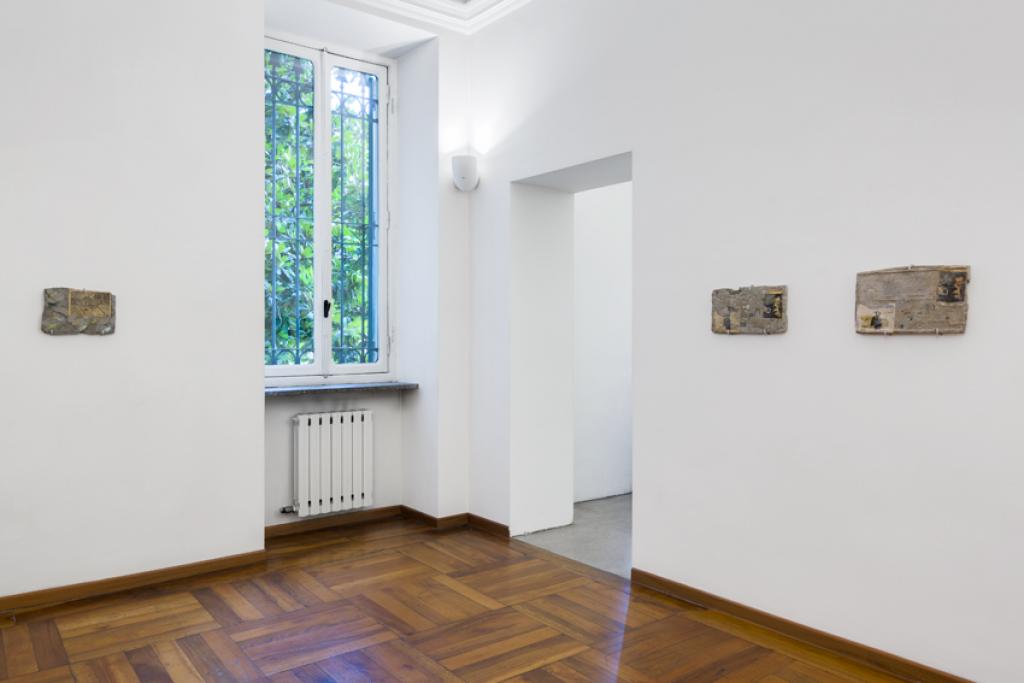 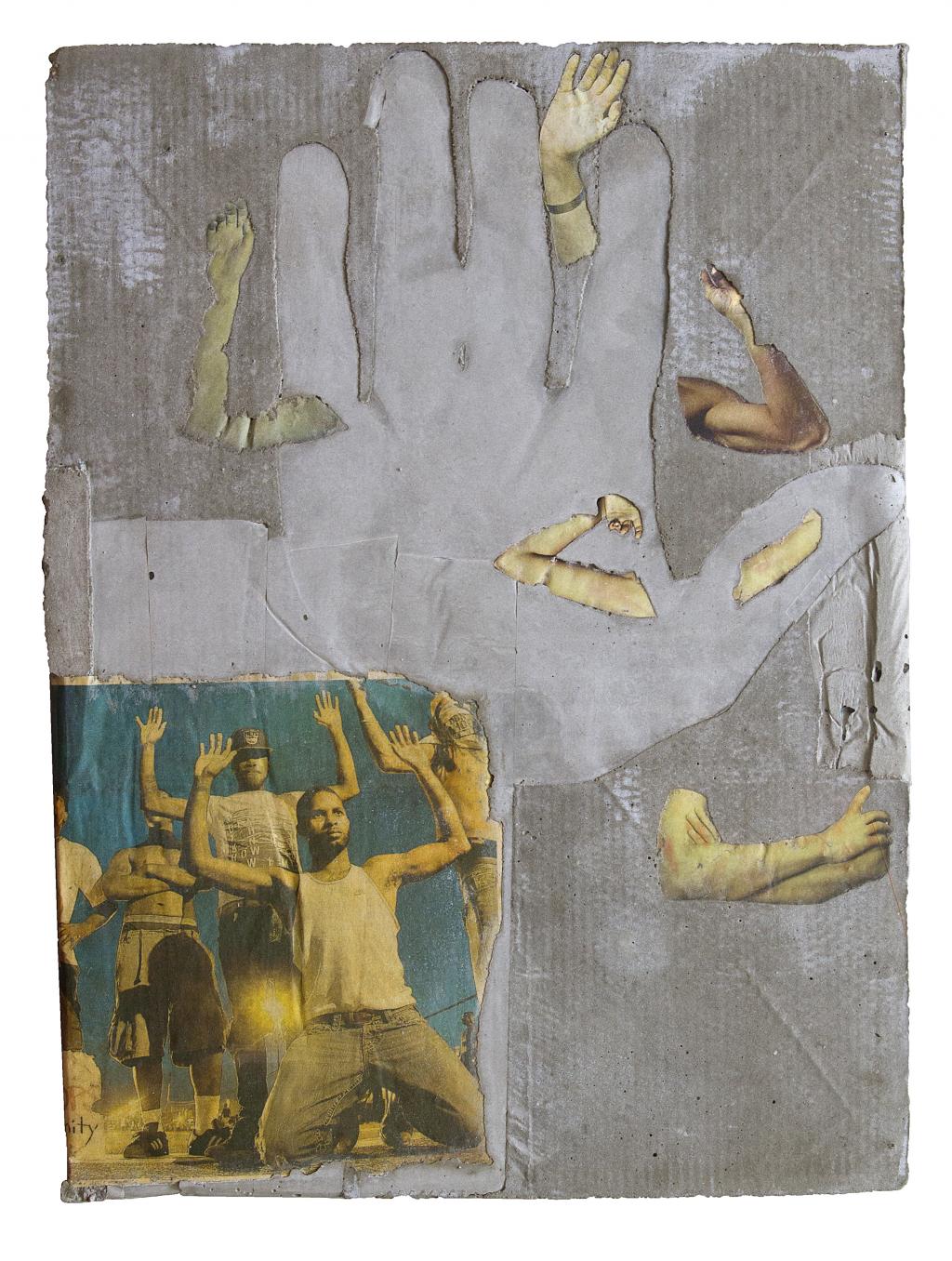 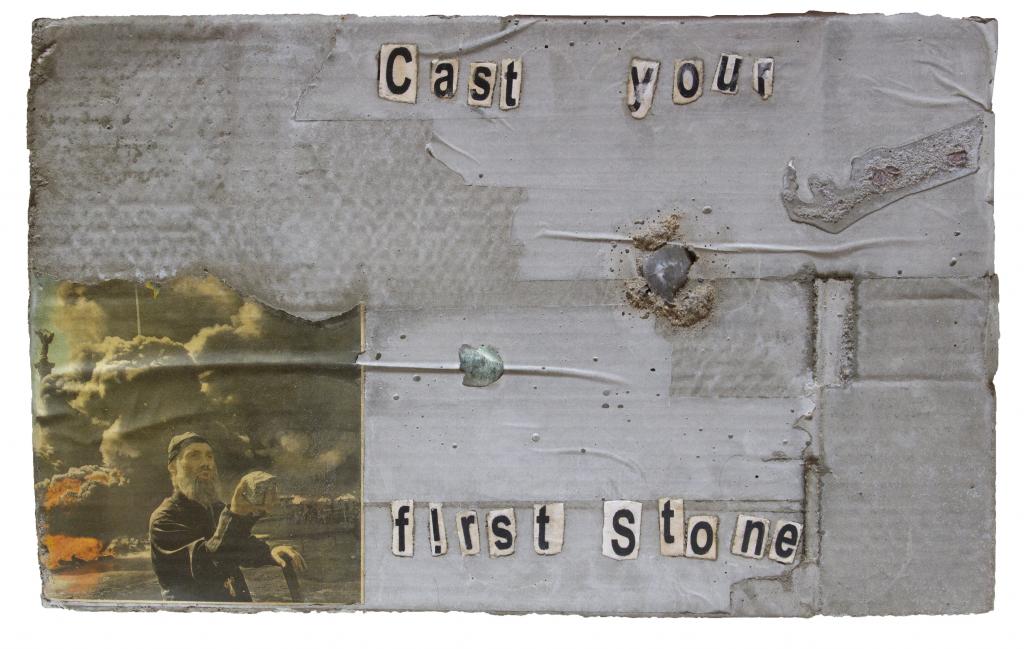 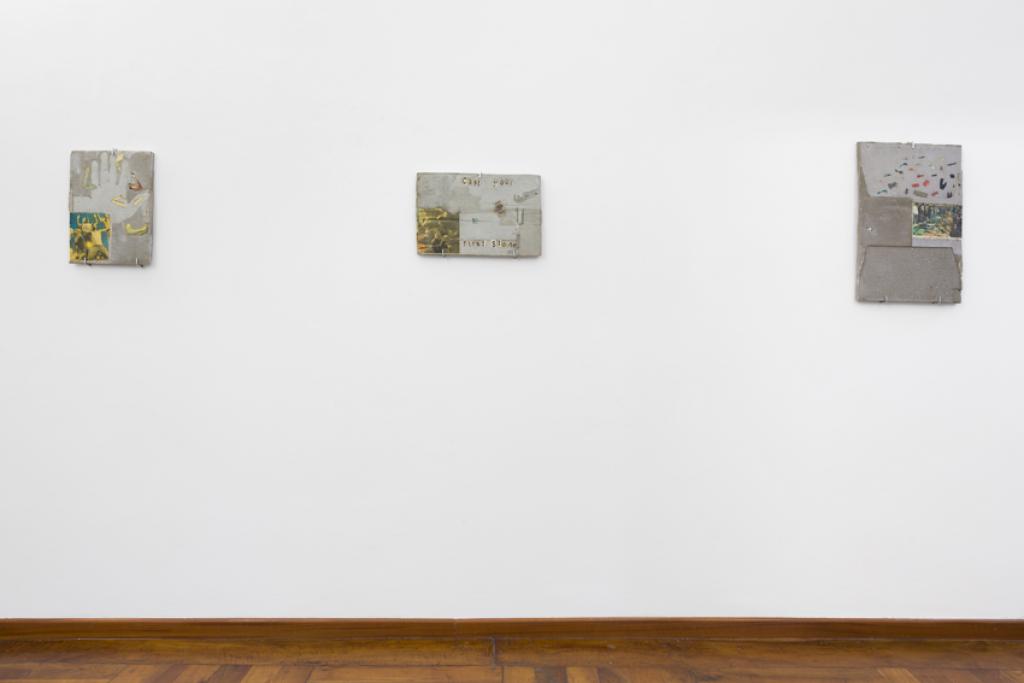 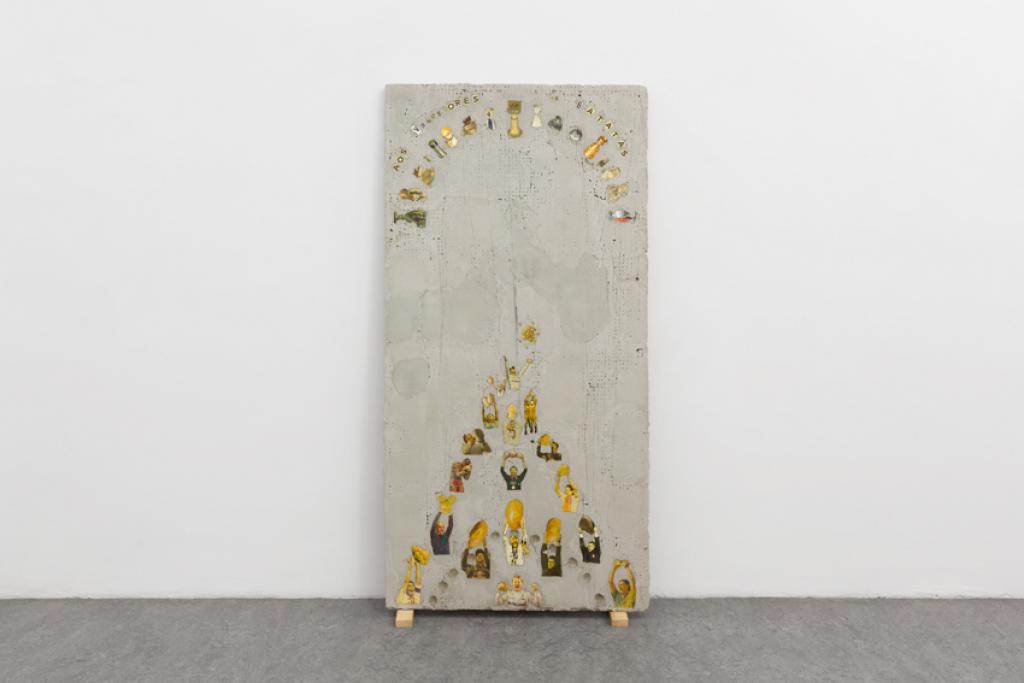 The exhibition Take Care. Exercises in attention with six lajes and one stele by Matheus Rocha Pitta takes its origin from the research, study and restoration of three artworks by Brazilian artist Matheus Rocha Pitta, who ranks among the outstanding protagonists of the South American art scene. The exhibition unfolds in the rooms of the Galleria Alberto Peola as a discourse in which the artworks function as cornerstones of an meditation on the mutual relationship between poetic models and actual practice in the intersection between creative and curatorial acts, conservation and production.

Co-designed with the artist, the exhibition displays a massive stele and six lajes - recurrent features of the artist’s work - that consist of paving stones made of reinforced concrete of various sizes whose surface incorporates paper clippings showing images taken from newspapers and magazines and stored over the years. Rocha Pitta draws on this personal archive to construct stories, memories and scenarios, both present and past, often connected with Brazil, which denounce various forms of authoritarianism, misinformation, exploitation and injustice, which he complements with a profound, humane sympathy for the vanquished.

Having a father and a brother who are both artists, a background in philosophy, and a ten-year assistantship with artists Miguel Rio Branco and Rosangela Rennò, Matheus Rocha Pitta has chosen “the street as mental workspace” and attached a political value to common materials that are at-hand: food, water, stones, soil, newspaper and concrete. Concrete lajes (flagstones) are very popular in Brazil - they are made jointly by whole neighbourhoods to clad house roofs in the favelas or to cover graves in the poor cemeteries of Minas Gerais. The artist obtains them by draining concrete into cardboard boxes used for vegetable in outdoor markets. By borrowing the techniques of self-made building and by choosing to match concrete with such a fragile and worthless material as newsprint, Rocha Pitta attaches to the incongruity of the two materials and their uncharacteristic juxtaposition the value of a latent violence as well as an act of resistance. Like the stelae, the lajes are receptive surfaces that retain traces - the cardboard folds, the reliefs and the marks of fragments and objects, pictures of news stories snatched from a fast-moving consumer culture. In the two works Laje #19 (Herzog) AP1 and Laje #19 (Herzog) AP2, artist's proofs in a series of 12, the artist juxtaposes a paper clipping showing one of those cameras held by the investigation police - and the photograph sent round in 1975 by the military regime to prove the suicide of communist reporter Vladimir Herzog, who was arrested, died in prison and was only recognized as a victim of the dictatorship as late as 2012. Matheus Rocha Pitta relies on a ‘silent contamination of images’, their social as well as political use, to invite a careful and focused examination by the viewer.

The outcome of a longer and more considered planning and production process, the stelae, instead, have taken on an assertive rather than a narrative value and exert a monumental impact, though rendered on a human scale.  In For The Winners The Potatoes (2017), after which the solo exhibition at Künstlerhaus Bethanien of Berlin was named, the artist references a novel by Joaquim Maria Machado de Assis, Quincas Borba (1891), and invites reflection on the meaning and the value of trophies, thus producing a temporary subversion in the winners-losers hierarchy.

The warning Take Care, which has been chosen as the exhibition title, is meant to point out a community of purpose that includes, here as well as elsewhere, the artist, the public, the curator, the restorer and the gallery, all working together to perform an exercise in attention and ‘care’. Underlying this temporary ‘institution’ is the artwork, which, in the case of Matheus Rocha Pitta’s lajes, is the expression of the perfect symmetry between poetic models and actual practice, between contents, materials and techniques, between the vulnerability – of memory, of matter, of the losers – and persistence. The artist’s gestures have been echoed in those of Sara Stoisa, a young restorer who, at the end of her academic course in Conservation and Restoration of Cultural Heritage, collaborated with the artist in his studio and, having observed him at work, retained the principles of the production processes in her restoration practice, together with the parameters for the conservation at the origin of creative dynamic. To mark the closure of the exhibition, the Galleria Alberto Peola will offer an opportunity to discuss these as well as other issues raised by the show project.

A video will be available in the gallery showing the artist being interviewed by Sara Stoisa, at the time she was in Brazil conducting research prior to restoring three lajes – which was part of her thesis for her Degree in Conservation and Restauration of Cultural Heritage, University of Turin, with the Centro per la Conservazione e il Restauro dei Beni Culturali "La Venaria Reale" (Professor Sandra Vazquez and Professor Oscar Chiantore, tutors).

Born in Tiradentes, Brazil, in 1980, Matheus Rocha Pitta works with photography, sculpture, video, and installations which often rely on some action from the audience to get started, for example moving around and linking the various elements that form the exhibition as a whole. He held an exhibition at Gluck in Milan in 2016, at the end of a residency in which he produced the project NO HAY PAN, an installation as well as a performance quoting a slogan (“There is no bread”), used in demonstrations in Spain. Matheus Rocha Pitta has taken part in international events like the 9th Taipei Biennial in Taiwan (2014), the 29th São Paulo Biennial in Brazil (2010) and exhibited in museums and art centers like the Matadero in Madrid (2014), the Palais de Tokyo in Parigi, the Fondazione Morra Greco in Neaples, the Krannert Art Museum, Illinois, USA (2013).