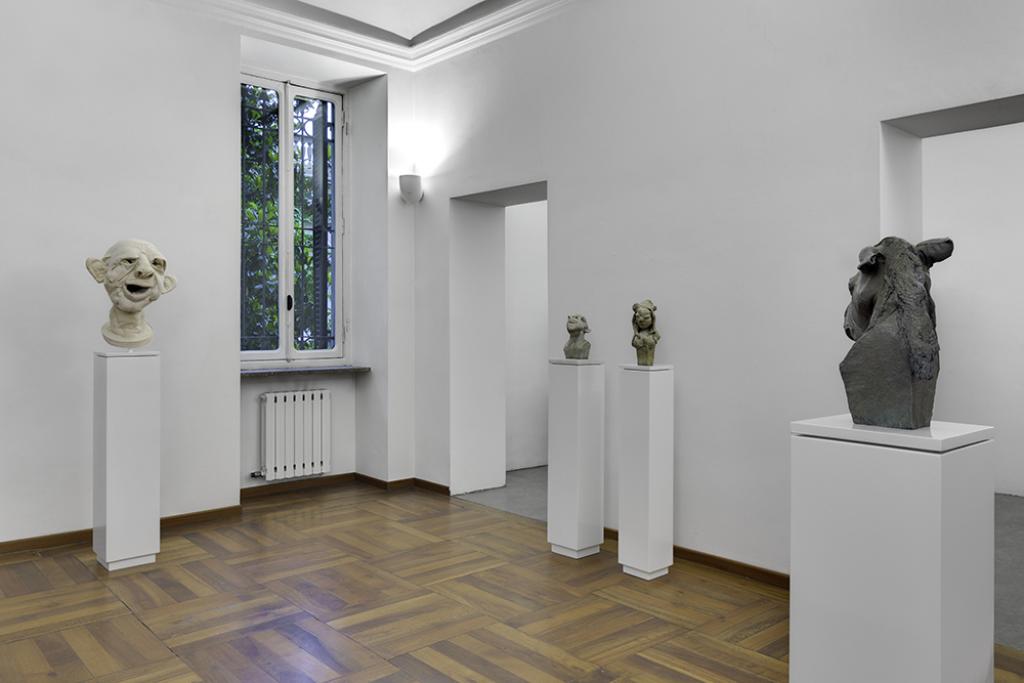 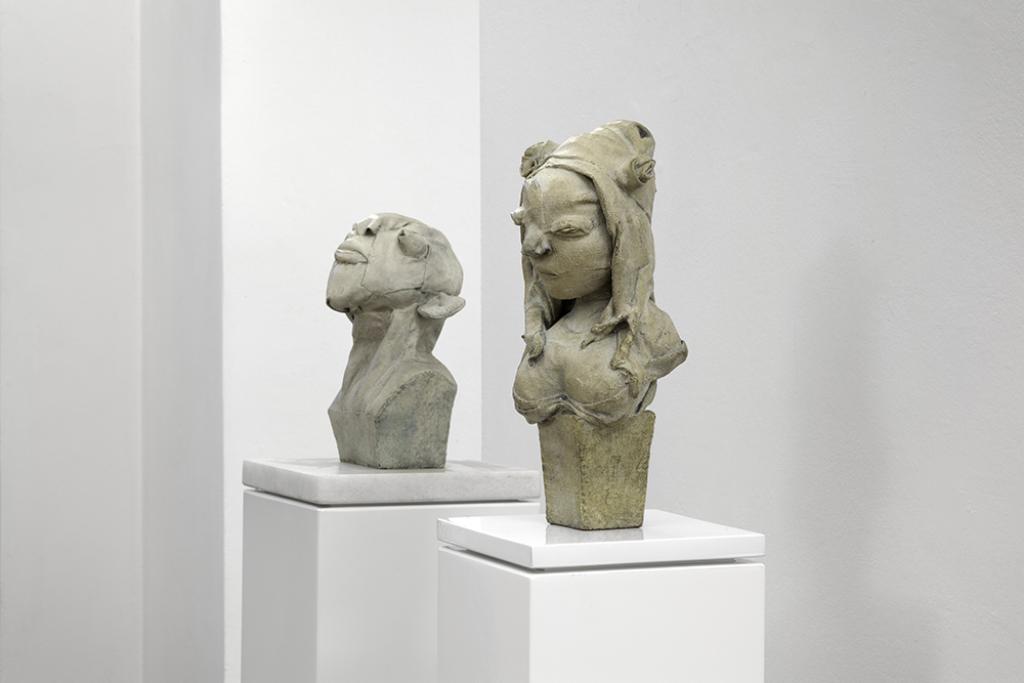 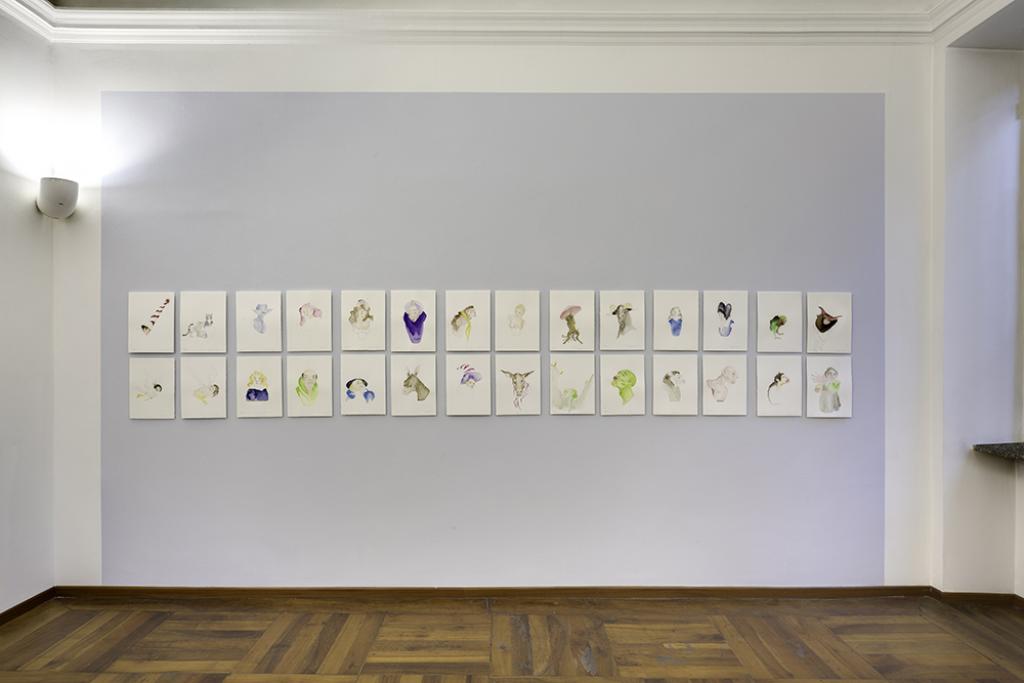 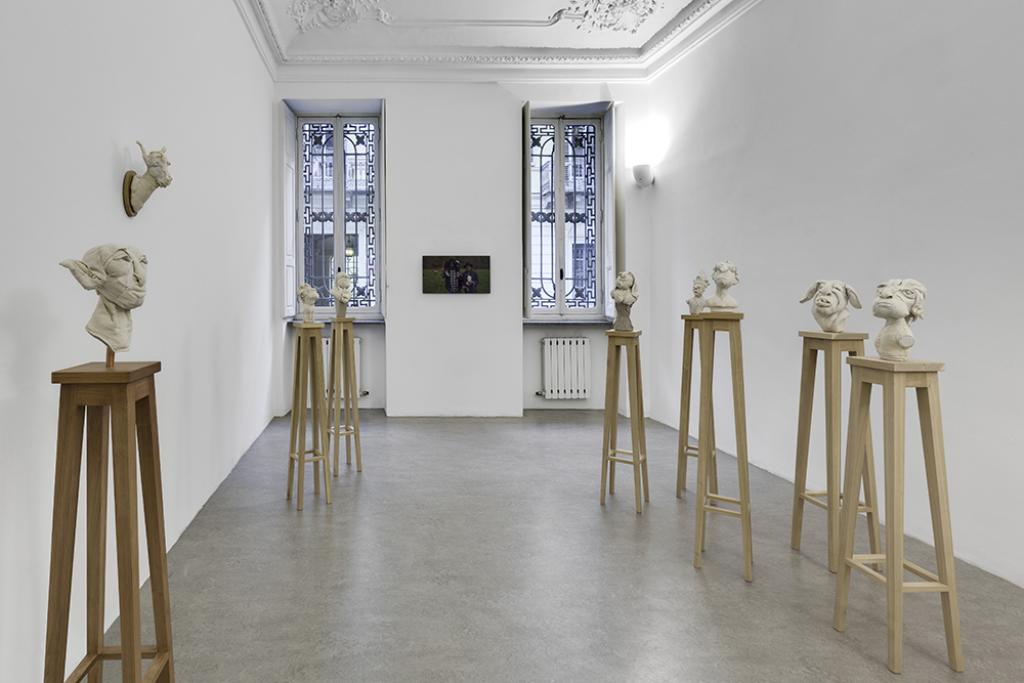 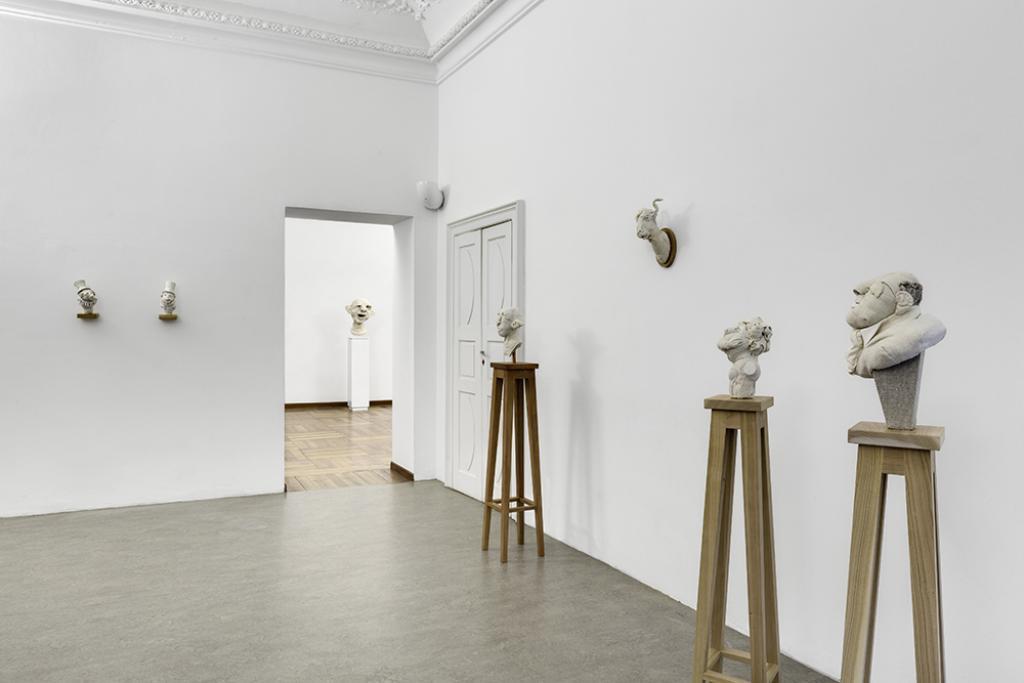 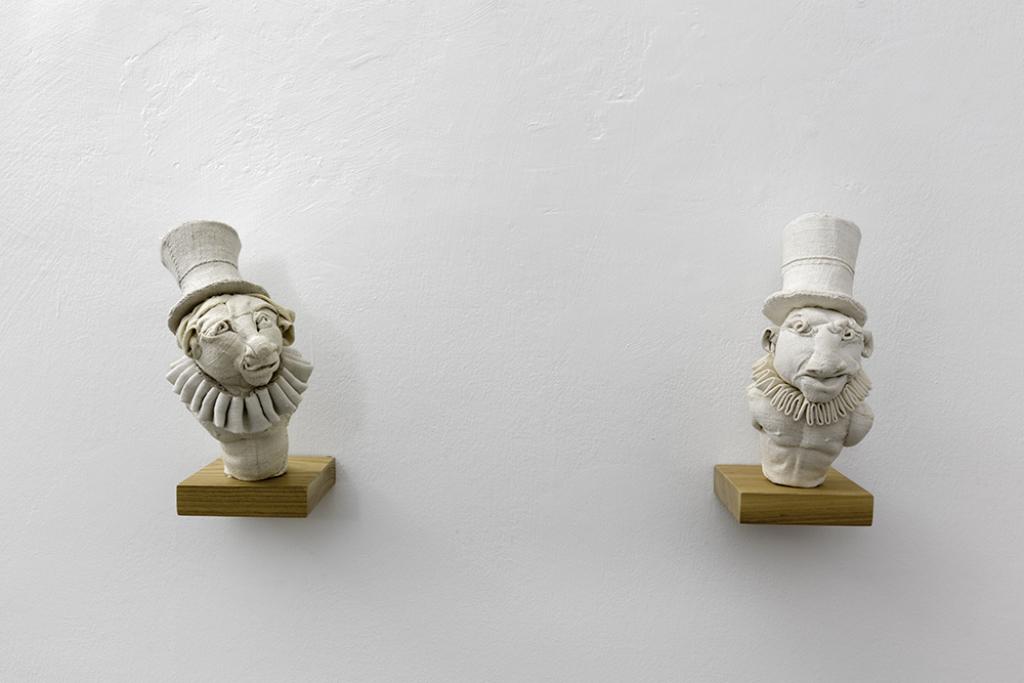 Alberto Peola is pleased to present the second solo exhibition by American artist Marguerite Kahrl with the gallery.

An unusual invention by any standard. The series Noble Savages by Marguerite Kahrl, inspired by Goya’s Los Caprichos (a series of eighty etchings published in 1799), are busts celebrating monstrous figures, not in marble as might be supposed, but in stuffed hemp fabric, a humble cloth made from a plant  that until quite recently was grown in many areas of Italy. Ever monsters, but soft monsters whose ears can be affectionately tweaked, they are in a strange way comforting, rendered homely by the rough, handwoven material. These are domestic monsters, tamed and placed on pedestals a little too slender to suggest solidity, and they observe the world with a blind eye, squinting benignly with their lumpy features and lopsided grins.

Marguerite Kahrl is a neoconceptual artist from New York with a strong commitment to the environment and convictions anchored in the principles of permaculture, a design philosophy that seeks to incorporate ecologies based on observing natural patterns, taking responsibility for the Earth, caring for people, and practicing sustainable development. This holistic attitude allows her to keep together her concern about an ever more complex and overloaded world and artwork that never succumbs to pure activism.

Her soft cloth monsters are in fact the product of research on the properties of industrial hemp, which was once cultivated  in many parts of Italy, including the Canavese valley in the Piedmont region of Northern Italy, where Kahrl lives for part of the year. Kahrl was fascinated by this versatile traditional plant, which was once employed for all sorts of domestic purposes, from sheets to nightwear, and even for less well-known culinary uses such as oil and other foodstuffs. Its environmentally friendly properties are many and varied - hemp can even provide a petroleum substitute - and it is no coincidence that she chose it as a metaphor for sustainable living.

But all serious-minded intentions apart, I can only imagine the great time she must have had sewing up her monsters’ features, pulling the cloth this way and that to modify their grimaces. Who are these guys? In actual fact they are not as close to Goya’s Los Caprichos as you might think. His nightmarish creatures are a biting caricature of the moral and social abjection of his day. Kahrl’s Noble Savages are, I believe, closer in spirit to the kind of parody of human failings we find in the work of Honoré Daumie, although they retain the ghoulish appearance of Goya’s irrational and highly hermetic etchings.

As with Claes Oldenburg, hard objects turned soft make people smile; they have lost their edge, taking on the tactile properties of a soft toy, touchable, almost huggable. Vaguely zoomorphic, like Goya’s donkey-headed figures of authority, Kahrl’s savages remain nonetheless curiously aloof, powerful figures that might somehow help us mediate between our reasonable waking world on the one hand, and an invisible irrational world of fantasy and fear on the other.

Perhaps it should not come as a surprise that  Kahrl takes her cue from a particular period in European history. Challenging the implicitly current postmodern thinking, the title Noble Savages she confers on her monsters is no mean claim, bringing to the fore all sorts of implications, most of which evoke the Enlightenment or, as the English prefer to call it, the Age of Reason. Not only a reference to Dryden, who first coined the phrase, the name has a very Rousseauesque ring to it. Rousseau was the first of the Philosophes to condemn in no uncertain terms the depravity of his era, asserting at the same time the moral superiority of the savage - s/he who has not yet been contaminated by the corrupting influence of society but maintains pristine innocence and nobility.