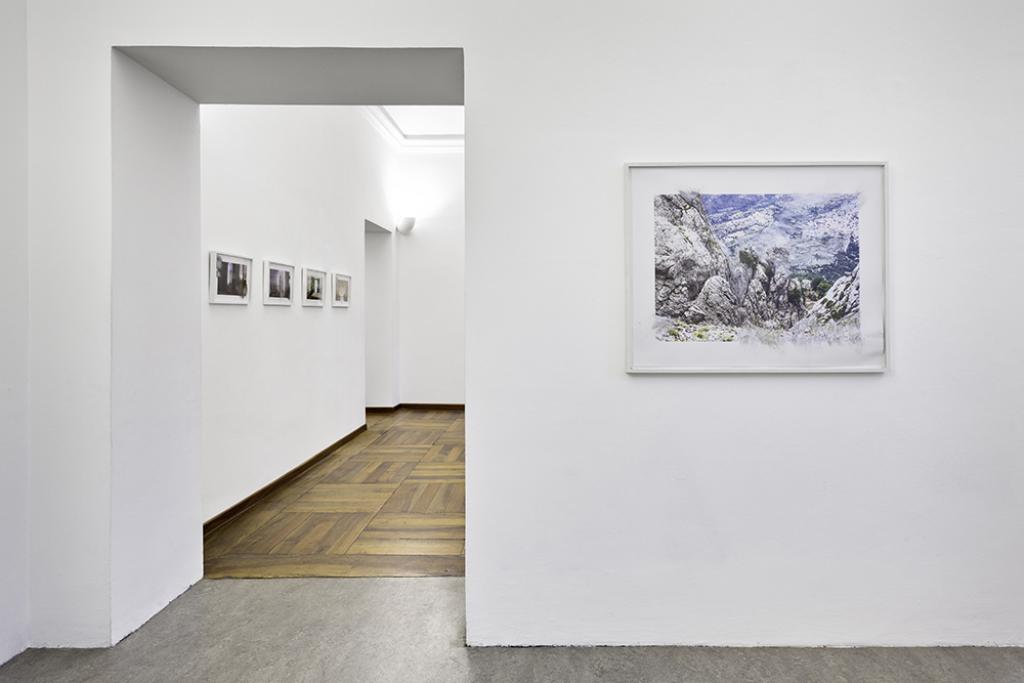 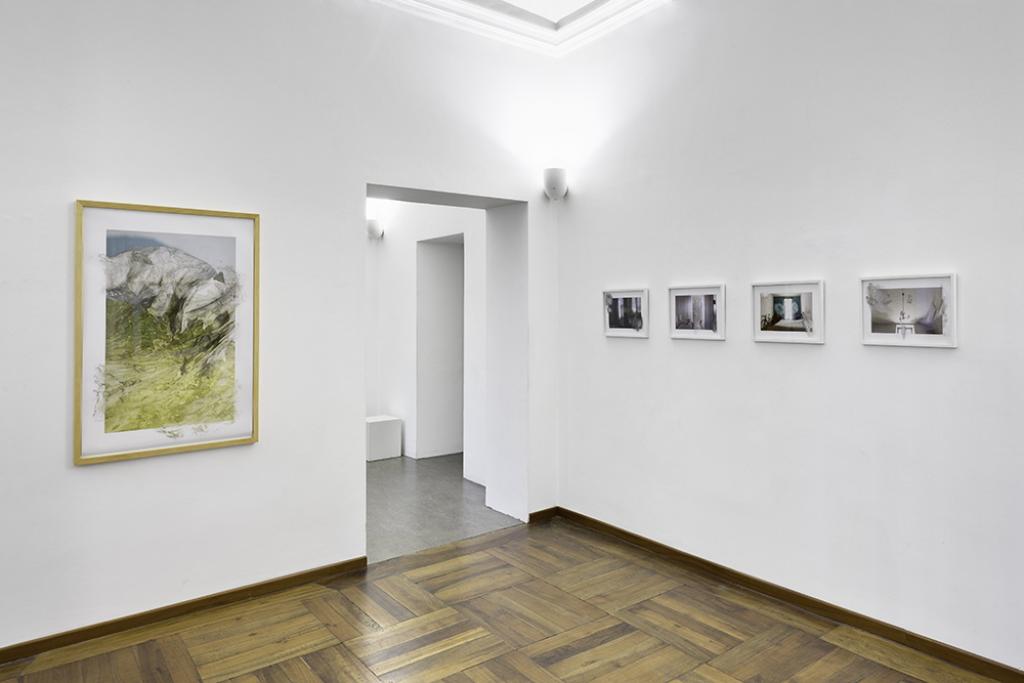 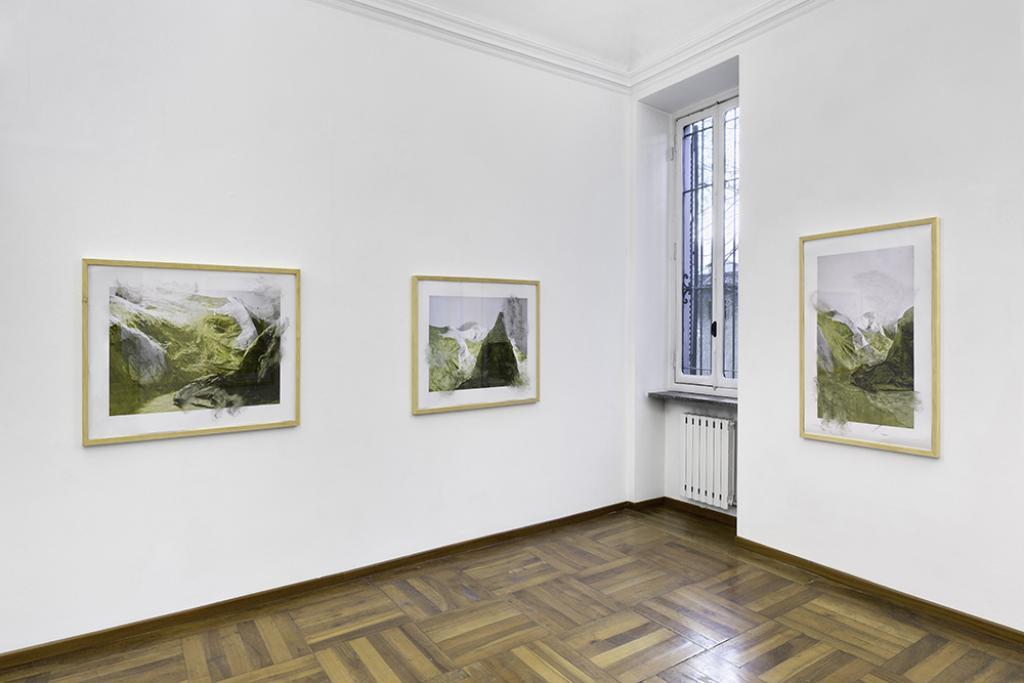 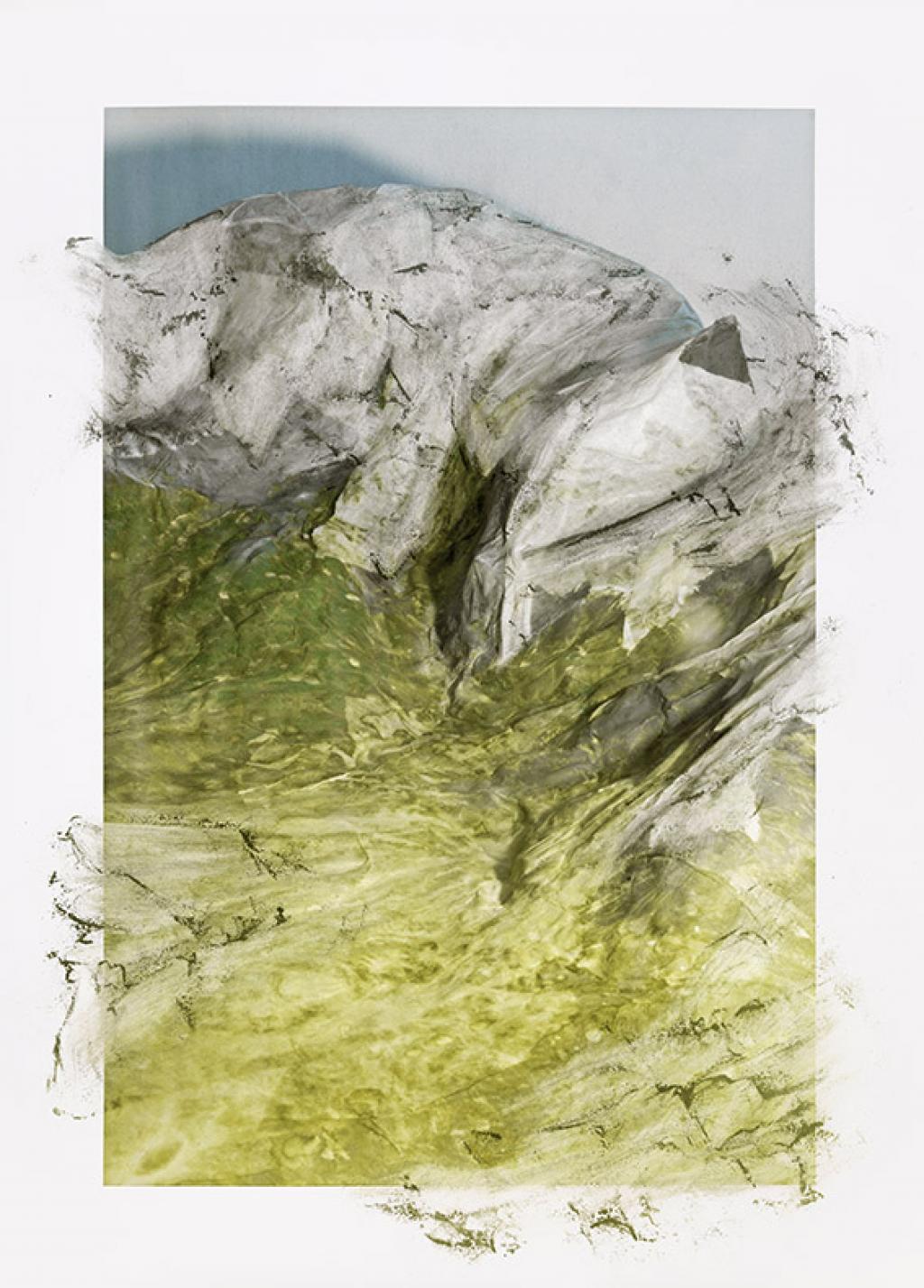 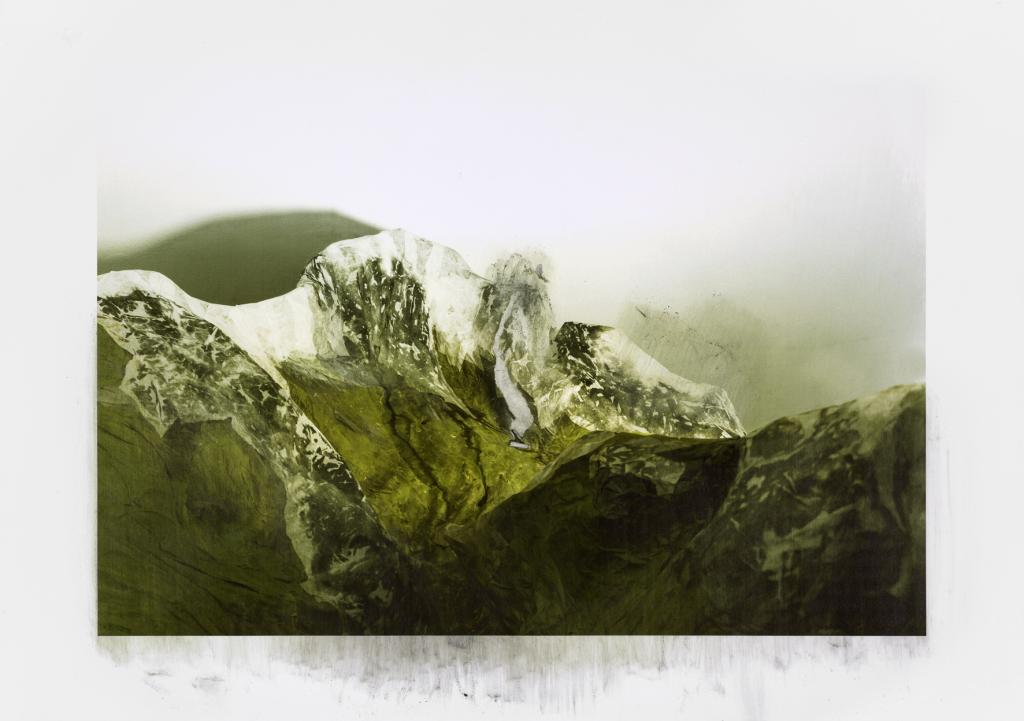 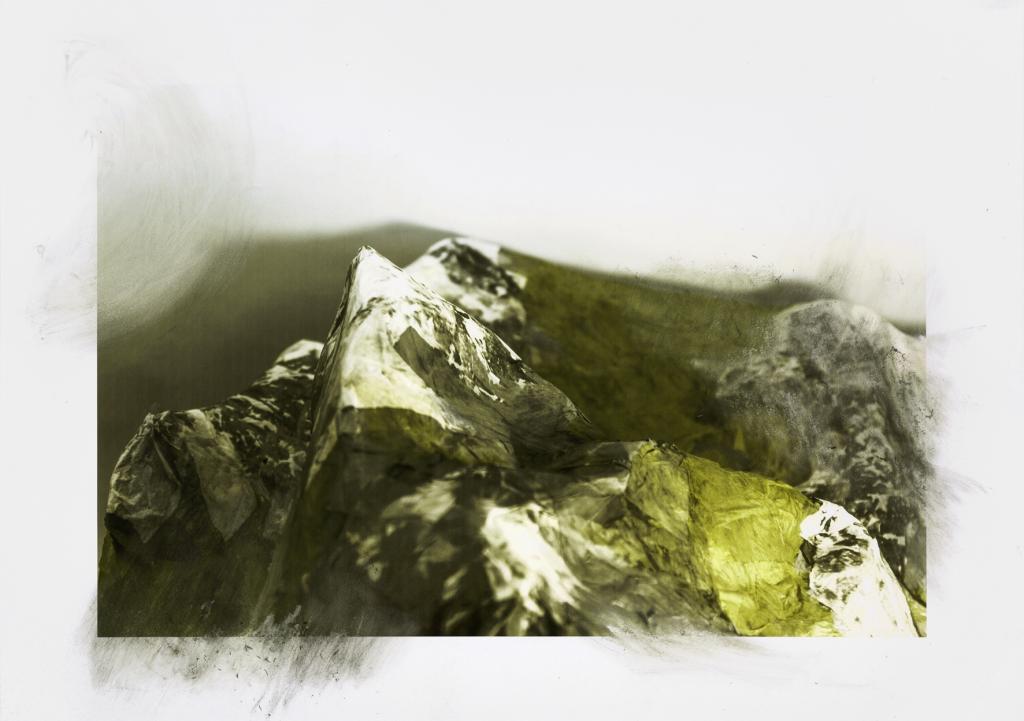 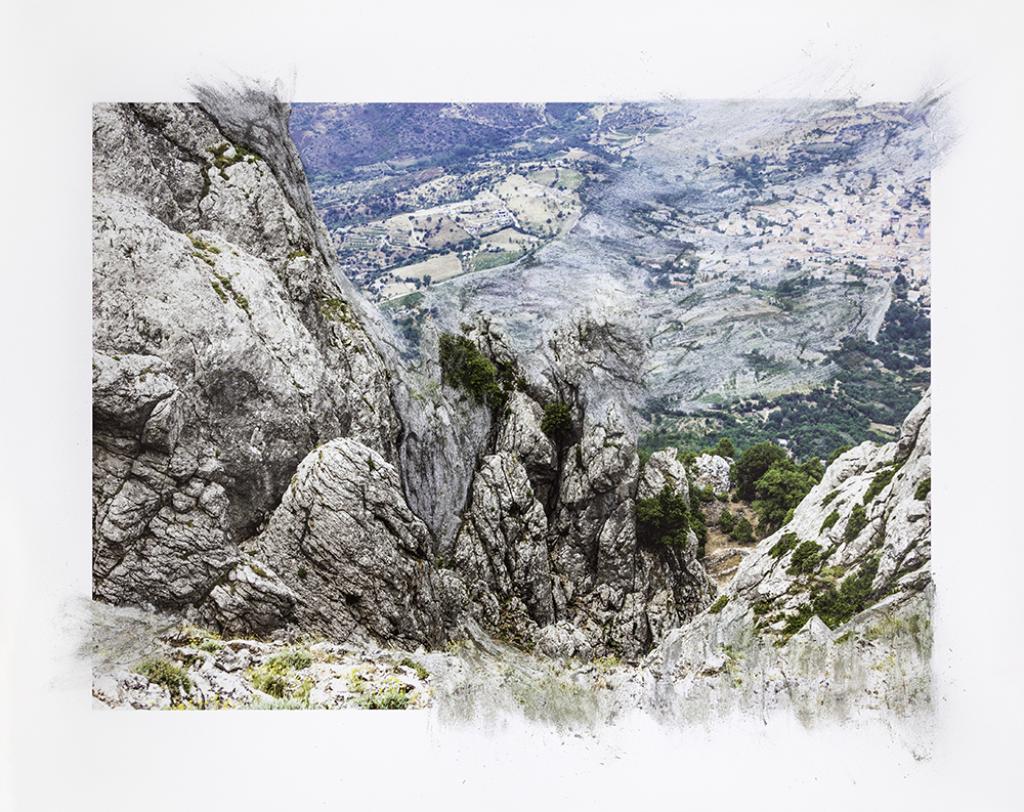 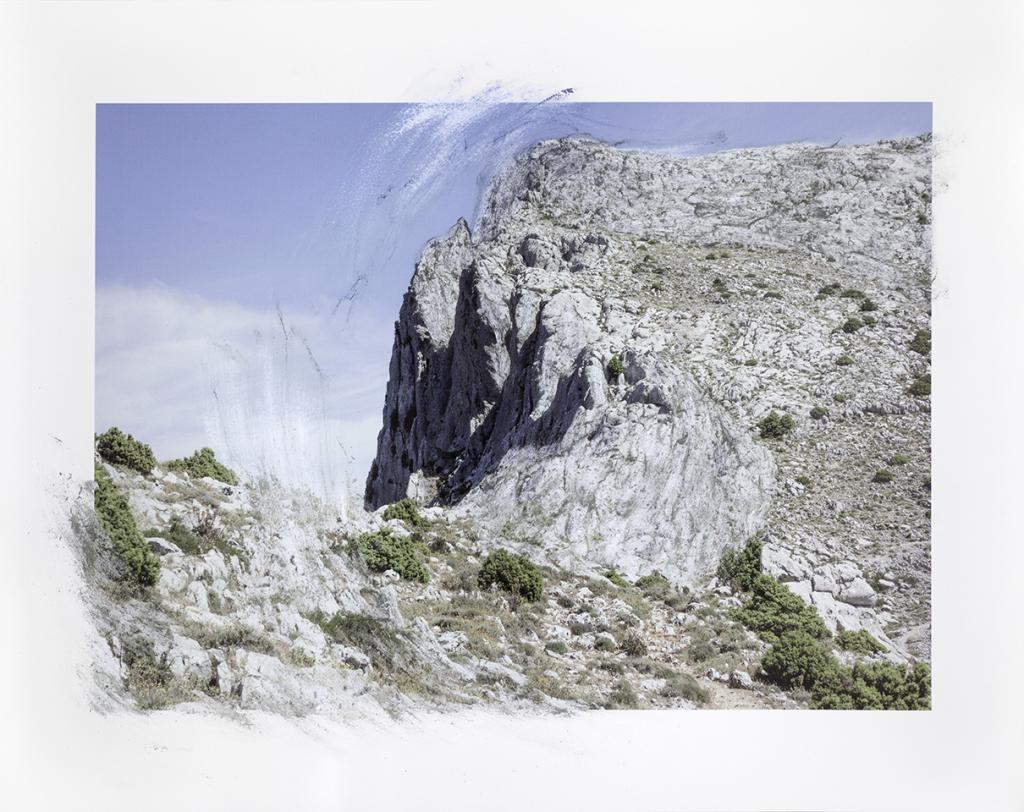 Alberto Peola is pleased to present Laura Pugno’s third solo exhibition with the gallery.
The main theme of Laura Pugno’s artistic research is visual perception as a culturally conditioned experience. In that it is the most common subject of traditional visual perception, the landscape provides the ideal domain for Pugno’s critical investigation. In the early phases of Pugno’s work, the landscape featured only through one of its traits, such as colour or weight, regardless of morphology. Alternatively, it featured in the Plexiglas slabs where Pugno carved the reflections of the actual landscape that was behind her. Later in her ‘erasure’ phase, she focused on the landscape as a whole, and worked on it through some selective rubbing aimed at ‘freeing’ some of its parts.

Today Laura Pugno presents a new cycle of erasures, which have proved to be a fruitful and self-renewing line of research. A landscape can be constructed anew, albeit evoking a real one, or be enhanced through multiple sources of light, then framed into a picture and partially erased to reveal its deepest reality. One becomes aware that the landscape is not an ordinary object, one of the many surrounding us, but, more meaningfully, a way to organize reality into patterns. Many complex visual experiences can be treated as landscapes, in spite of traditional morphologies. The landscape becomes a category that transforms a complex visual experience into a system. A category that the artist has applied to unusual images, such as home interiors, each time marvelling at how well the landscape manages to integrate visual experiences and each time attempting, through erasures, to bring to light what was previously hidden from common view.

In its most radical form, Pugno’s critique involves a rejection of sight itself. This phase started in her workshop Membra Vagavano (Wandering Limbs) curated by Gian Antonio Gilli in Turin last spring. The fundamental assumption of the workshop builds on Empedocles’s theory that, in the Beginning, there was no such thing as a body, but, rather, isolated parts endowed with autonomous life. From among these unrelated body parts Laura Pugno has chosen the eye, which is not, however, the sense organ of sight (which in the Beginning was unimportant), but of touch, which used to be the predominant form of experience. The discovery of touch as more primitive than sight represents Pugno’s ultimate perspective in this phase of her work.
Thus, the original eye does not function through visual perception. Taccuini di viaggio (Travel journals) provides an imaginary account of the wanderings of the eye which experiences reality through the sense of touch. The surfaces that the eye ‘touches’ are pages printed in Braille. Pugno rubbed a photograph she had taken herself with some sandpaper and removed the top of the raised pattern of the Braille. By so doing, she did erase a few parts of the image but, at the same time, she brought out the sources of light that remind us of the fire (the light) which, in the archaic theory of visual perception, existed inside the eye and that, on surfacing, made sight possible.

Lastly comes her farewell to visual perception. The work Form in progress started from the so-called ‘Molyneux’s problem’. Molyneux was an Irish physicist who, in 1693, wrote a letter to Locke posing a question which later acquired world-wide notoriety:  ‘Can a man born blind who has learnt to feel the differences between shapes such as spheres and cubes distinguish those objects by sight if given the ability to see?’ Pugno’s answer to this problem starts from the observation that ‘a shape’ is traditionally meant to be visual. By challenging this received notion, her sculptures attempt to investigate a tactile shape, namely a shape that disregards sight altogether. Her sculptures are made of clay and are modelled following a purely tactile relationship with the two objects, a sphere and a cube, while attempting to bracket off all possible visual memories related to them. In these works Pugno sought to forget her knowledge of the visual shape of the two objects. She tried to touch them as if for the first time, trying to reconstruct a pure tactile condition. It is this condition that makes any new tactile experience of the same object something unique: an infinite wealth as opposed to the relative fixedness of visual shapes.