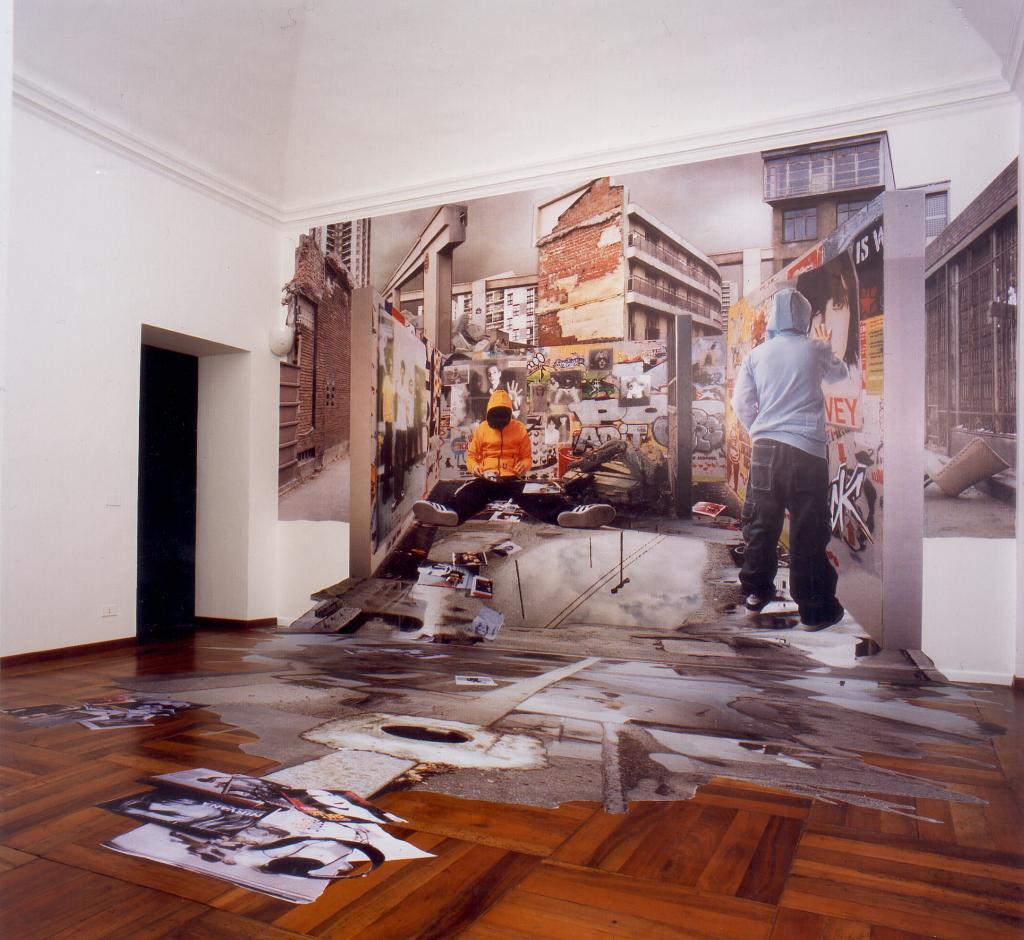 A huge black veil blocks out the sky. This harsh mask over the sun’s eyes, made up of portentous billowing clouds full of bitterness and sandy drizzle, is pregnant with rumours of an earthquake, even the horizon has disappeared. Hop between the gaping, mucky sewer and a soft slalom of puddles which extend before the construction. The entrance to the building has been devastated: the walls and stairs are decrepit; kids, kids, kids are everywhere. (1)

If these words by Aziz Chouaki had been taken from a rap song, the music would have been written by Eminem. If the city being described were not actually Algiers, we could mistakenly believe we were somewhere on the fringes of society, shrouded by the intemperate skies and deafening acidic noises portrayed by Botto e Bruno. But here the dislocation of the situation is so homogenised within the global city, curtained city, that we are fenced inside a space devoid of familiar codes. Paris is like Algiers: an archipelago of modernised enclaves, an enclosure full of sham micro-identities. City centres and suburbs branch off from nodes that both invite and prohibit entry to different communities. The dividing wall that separates them is invisible and cruel because it preys on an individual’s feelings, creating unhappiness, unease and anger in these terminal communities. People’s everyday experiences are tainted as they are robbed of their identity and drawn into a vacuous existence.

Surrounded by prison-like urban planning schemes they are engulfed by their own loneliness. The streets are full of mute signs and symbols; their individuality has given way to visceral reactions that check and hold the individual captive; and people are channelled towards social anonymity. The seductiveness of global attractions reigns in a world spurred on by constant, relentless and endless consumerism. Its strategy is deceit, which works by gutting the subject through a fragmentation of the self. We are all, simultaneously, consumers of and consumable goods; a liquid, undefined mass.

Botto e Bruno have been organising and transforming this pulverisation for some time now. The scope of their determined, impenitent exploration has been gradually enriching and fine-tuning the interpretative semiology of these tracts, and ironing out the creases in their narration. The collective collapse inside Kids Town is really the most refined elucidation of the of risks posed to individuality and the loss of contact between subject and the world. But there is more to this work than the almost cinematographic black and white backdrop, in front of which characters appear as disheartened and hollow figures. Botto e Bruno have plotted a puzzle which they use to articulate this close examination. The use of collage is not simply a formal device (a sort of sophisticated rapper’s beat), but a direct allusion to that state of total disintegration that the subject has to repeatedly go through. This social disorder is the bedrock from which the individual has to grow and build a new life out of the dregs. The inhabitants of this world, just like the collage elements, have to piece themselves together. It is not by chance that the drawing outstretches its boundaries across the walls, dropping right down to the floor: it recalls a work in progress to which other pieces can be added.

The scene is still the street, the setting of existential uncertainty, from where the architectural “disaster” looms from behind the walls. We are dealing with “absent constructions”; not planning, but unfulfilled promises. This is not an idea but a cement block, a filthy object trouvé, a desolate place. The only way of recognising this cellular and implosive space is through rock’s kaleidoscopic lens. This same kaleidoscopic universe contains a universe haunted by the presence of those icons that make up a rock town, where the mythical, desperate figures like Kurt Cobain and Jan Carr tangle with the gothic and fleeting worlds of Nick Cave and P. J. Harvey. It is the paradox of modernity that its heroes should be ground up into congenital and ruthless consumerism only to find the traces of their own belonging appear in the fragments of their own fetishes.
This is not however the case with the video Kids Play, where the subject’s digression from the child’s state of limbo, has not yet succumbed to its own mnemonic character; the bewilderment of loss has not yet been forgone in this “playground”. Despite the claustrophobic nature of these spaces, there is still an innocent awareness of the self in this ubiquitous world of childhood-adolescence, metropolises-ghettos and identity-anonymity. The chips are down for this pair of divergent artists.