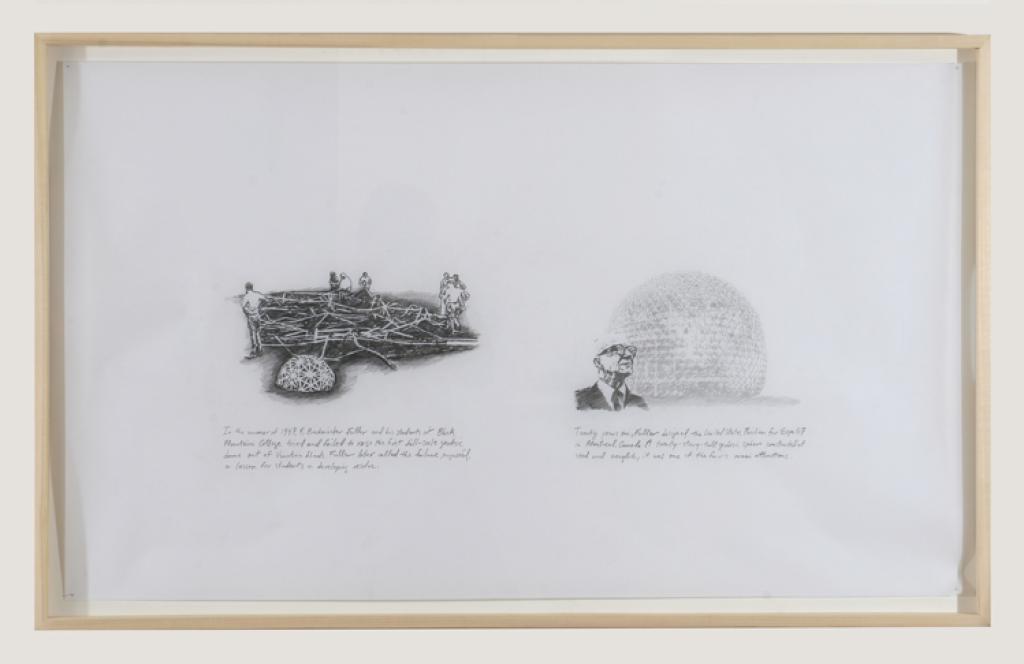 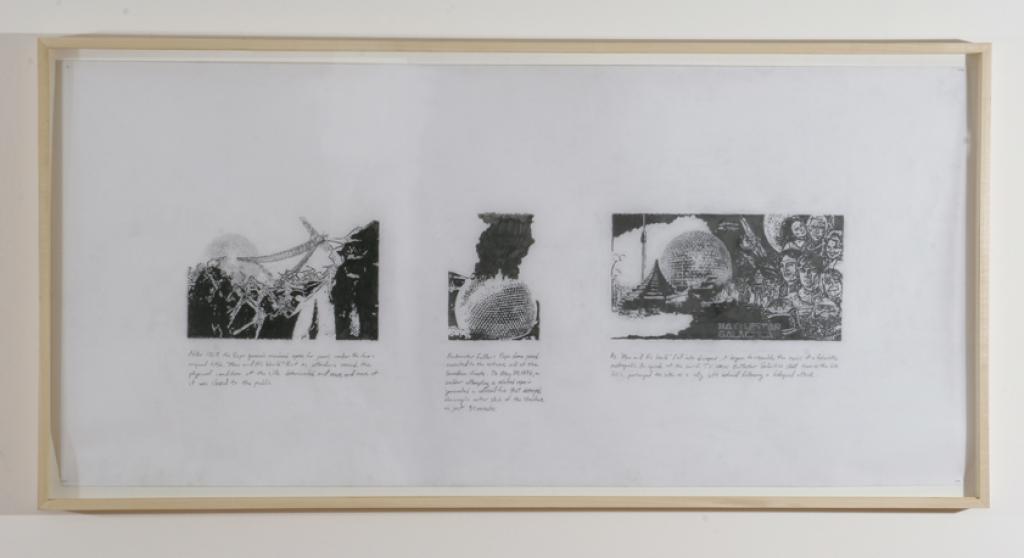 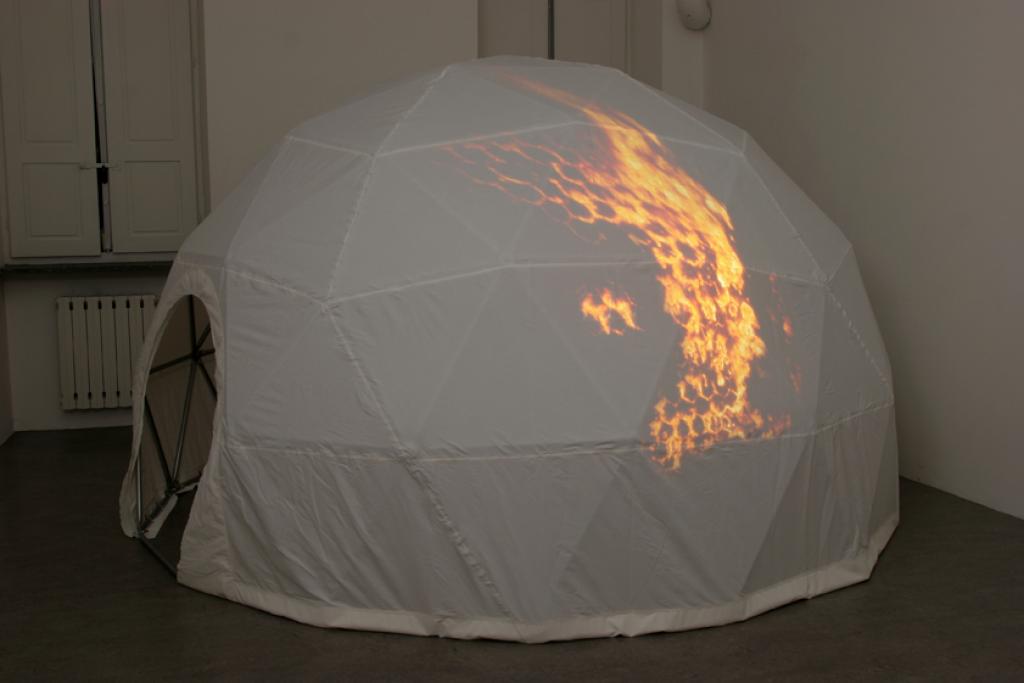 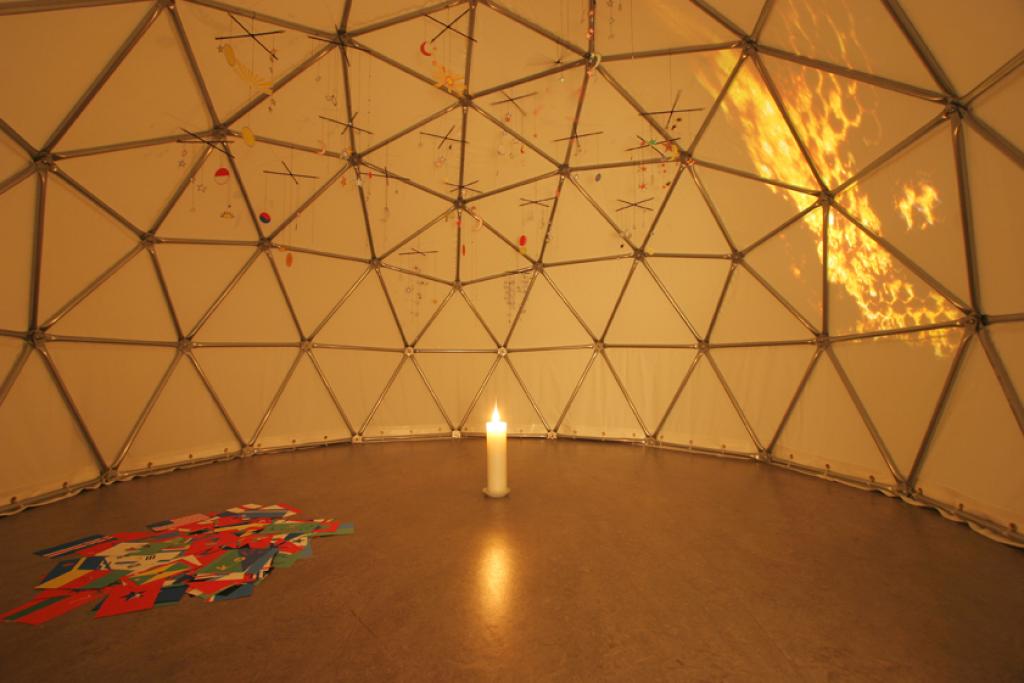 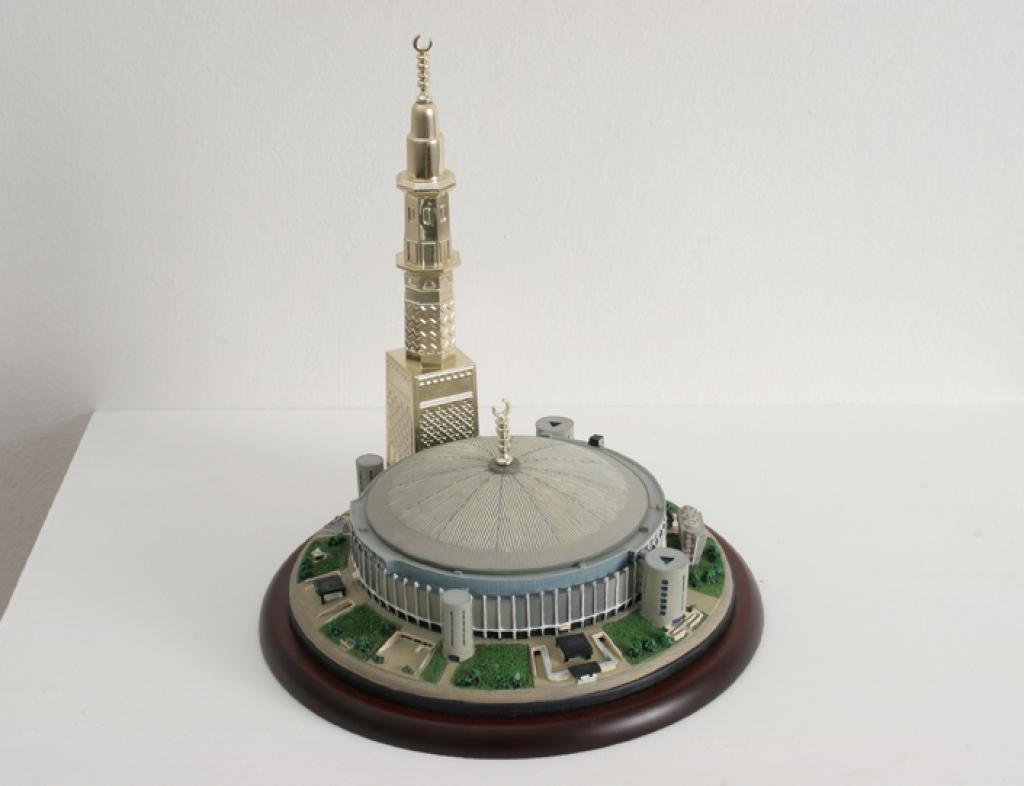 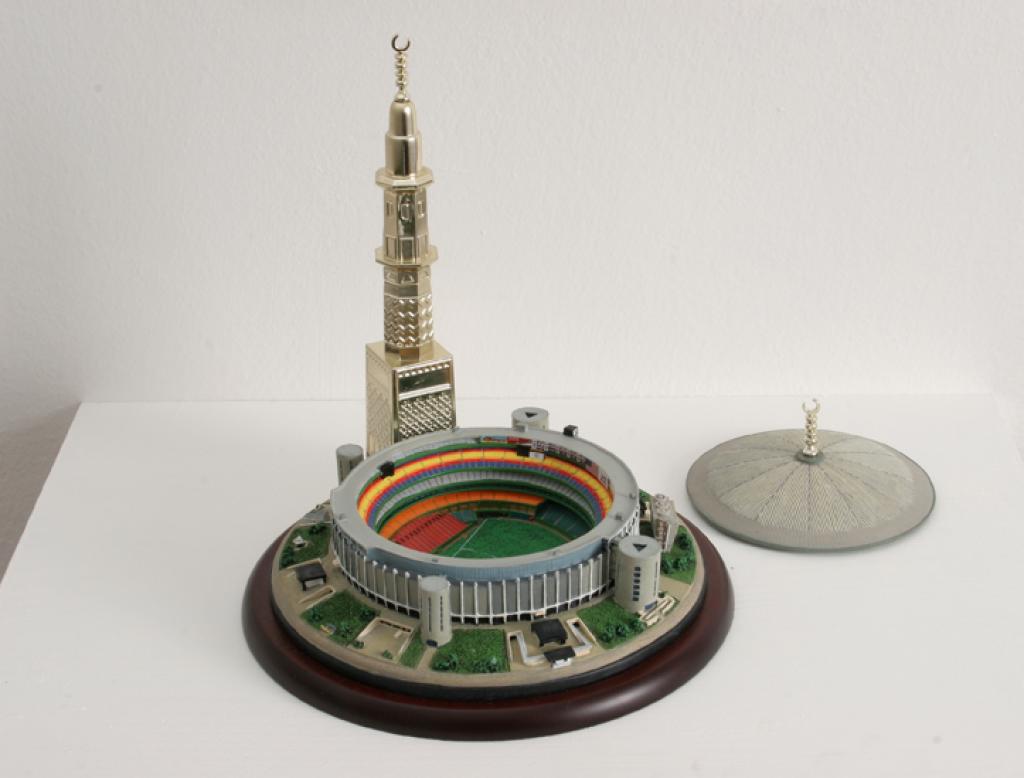 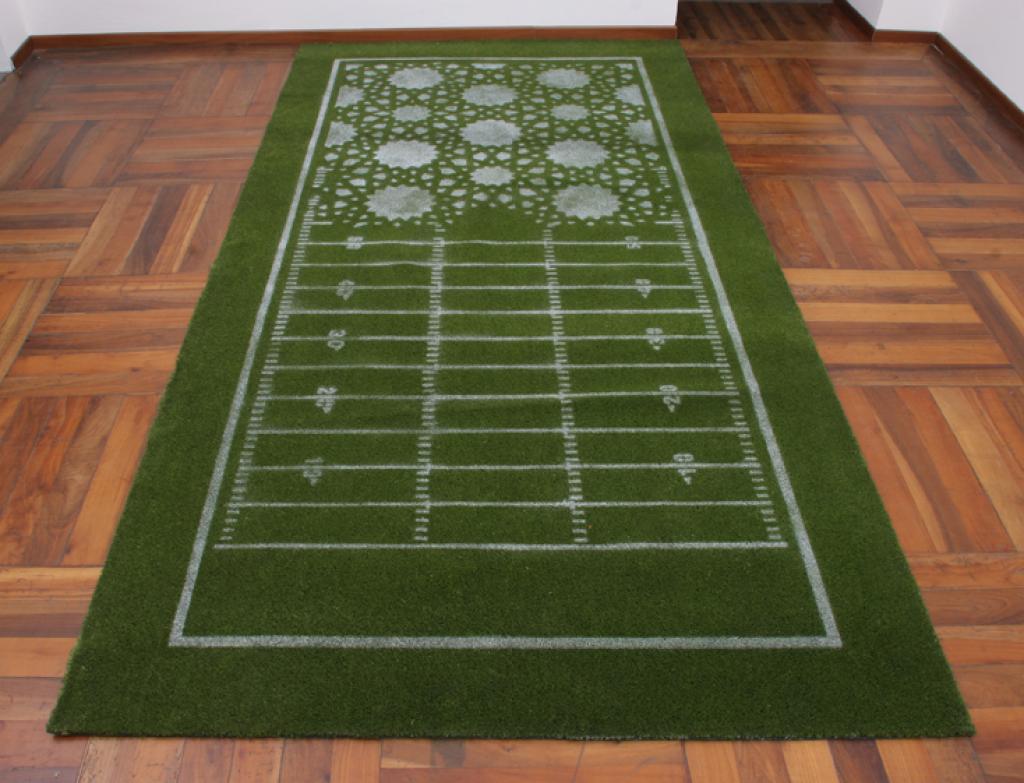 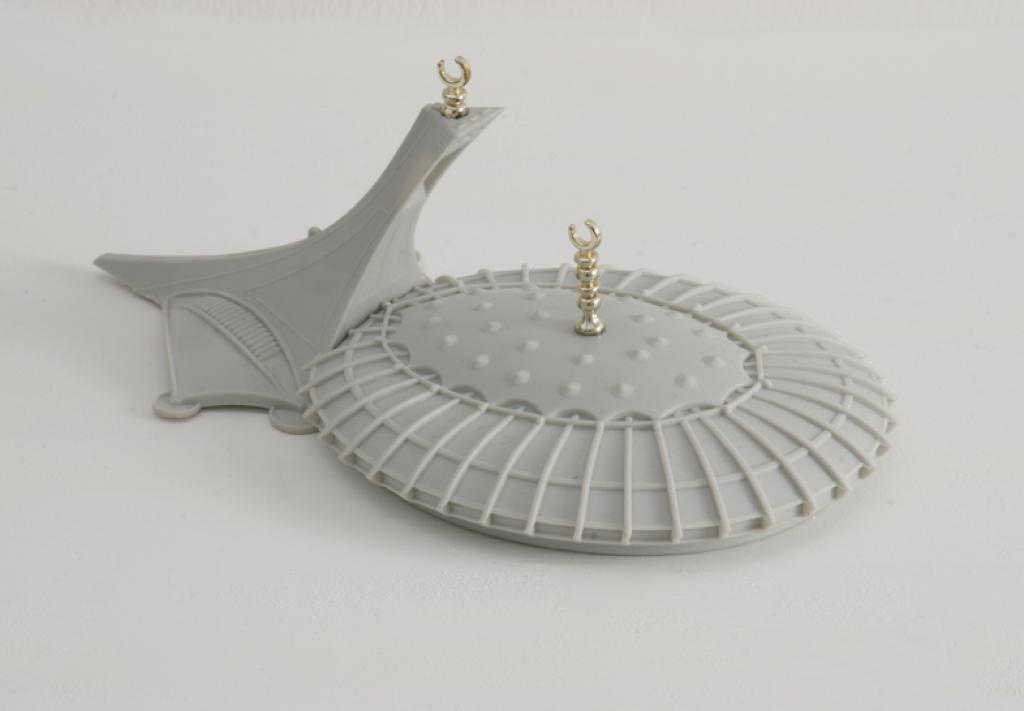 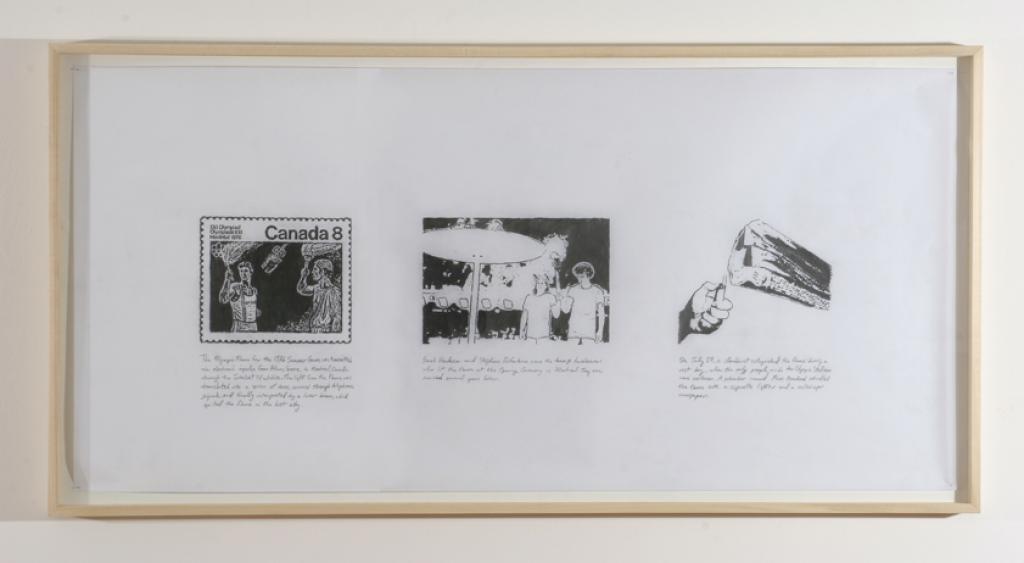 20 May 1976, Montreal - Final preparations for the Summer Olympics were underway when a plume of smoke rose above the Ile Sainte-Hélène. The United States pavilion, a twenty-storey geodesic dome built by Buckminster Fuller for Expo 67, had caught fire during repairs to the metal truss-work that underlay the dome's outer skin.
The entire acrylic shell was gone within half an hour, the metal structure reduced to one more ruin among the abandoned national pavilions that populated the island. Nine years prior, the site had served as a global playground, virtually insuring the city's bid to host the 1976 Summer Games.

Through the historic example of Montreal, Engames explores the problematic spatial and political conditions that host cities experience in the aftermath of such temporary, spectacular events as international expositions and the Olympics. With the demise of Buckminster Fuller's pavilion serving as the central episode, the viewer is invited to enter Spirit of 76, a two-meter-tall geodesic dome. The white dome seems the quiet and hopeful emblem of Utopian architecture, only to reveal a surface marred by an image of the pavilion engulfed in flames. Inside the structure hangs a mobile constructed of celestial symbols physically extruded from various national flags, inspired by the protestors who removed the stars from the American flag during President Lyndon Johnson's visit to Expo 67.
A series of drawings demonstrate the lineage of events, ranging from the failure of Buckminster Fuller's first full-size geodesic structure in 1948 at Black Mountain College; through the use of Expo 67's futuristic ruins as the backdrop for a sci-fi television show; and onward to the 2004 demise of the Montreal Expos, the baseball team that played in the infamous Stade Olympique, built for the 1976 Olympics but never completed.
The vacancy of abandoned sports stadiums serves as the point of departure for a series of drawings, discrete objects and sculptures picturing Houston's Astrodome, built in 1965 and anointed the "Eighth Wonder of the World" - only to be rendered obsolete by 1999. In the wake of Hurricane Katrina, evacuees from New Orleans were housed in the structure, and prayer services were conducted by local priests and imams on the former playing field. Proposals for a Flexible Architectureextends this hybrid function by transforming models of the Astrodome and other stadiums into mosques, making use of an Islamic clause that allows existing structures to f unction as religious architecture. Point Conversion, a piece of Astroturf (artificial grass invented especially for the indoor playing surface of the Astrodome) whose football field markings morph into Islamic design patterns, transforms the playing field into prayer rug.