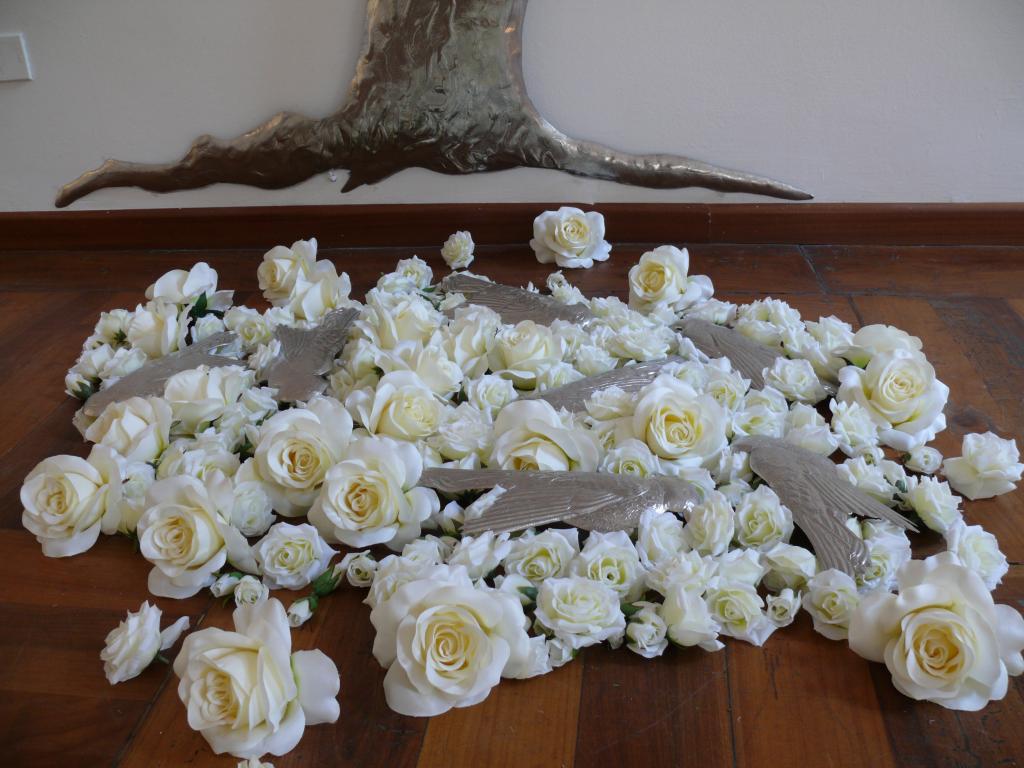 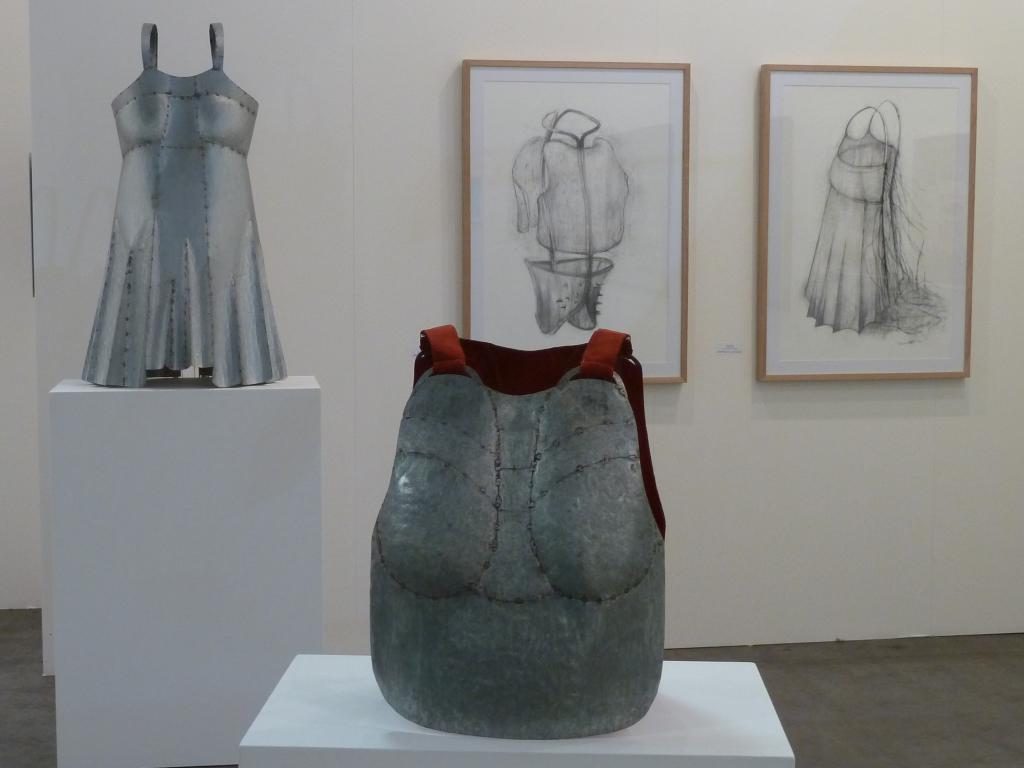 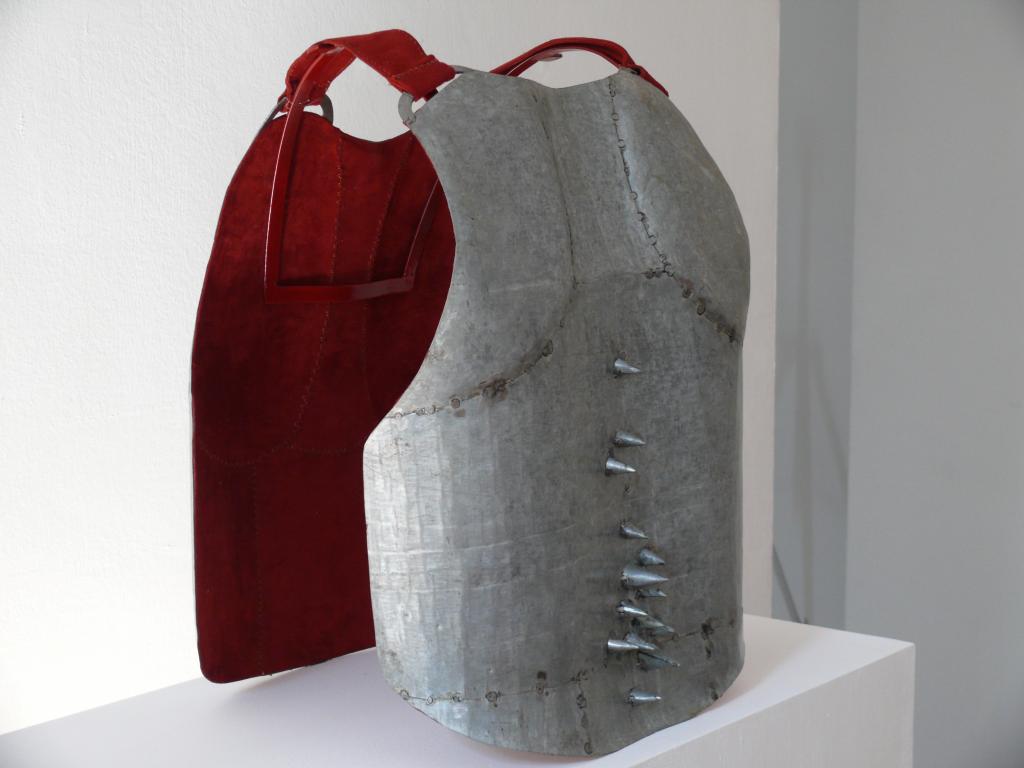 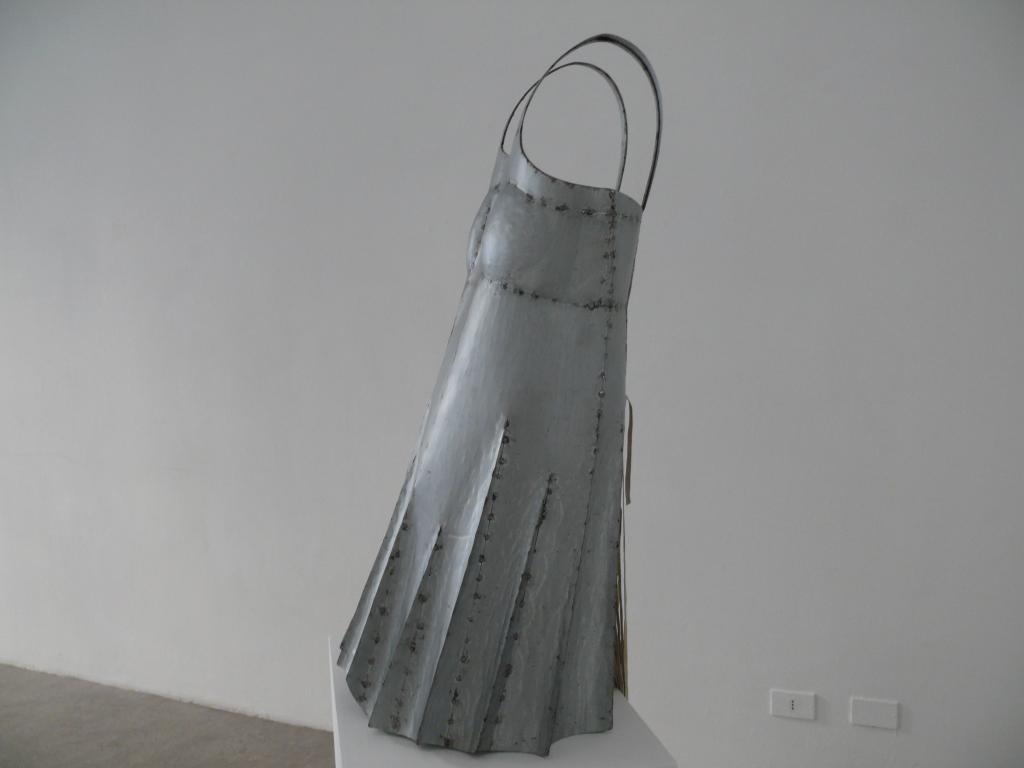 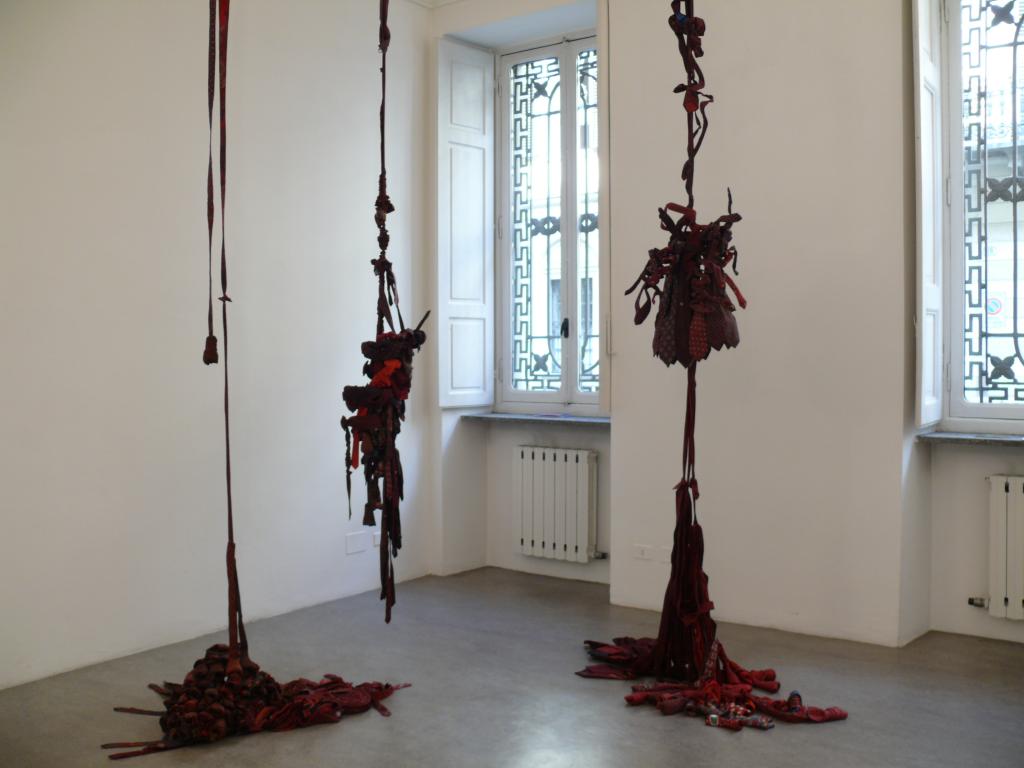 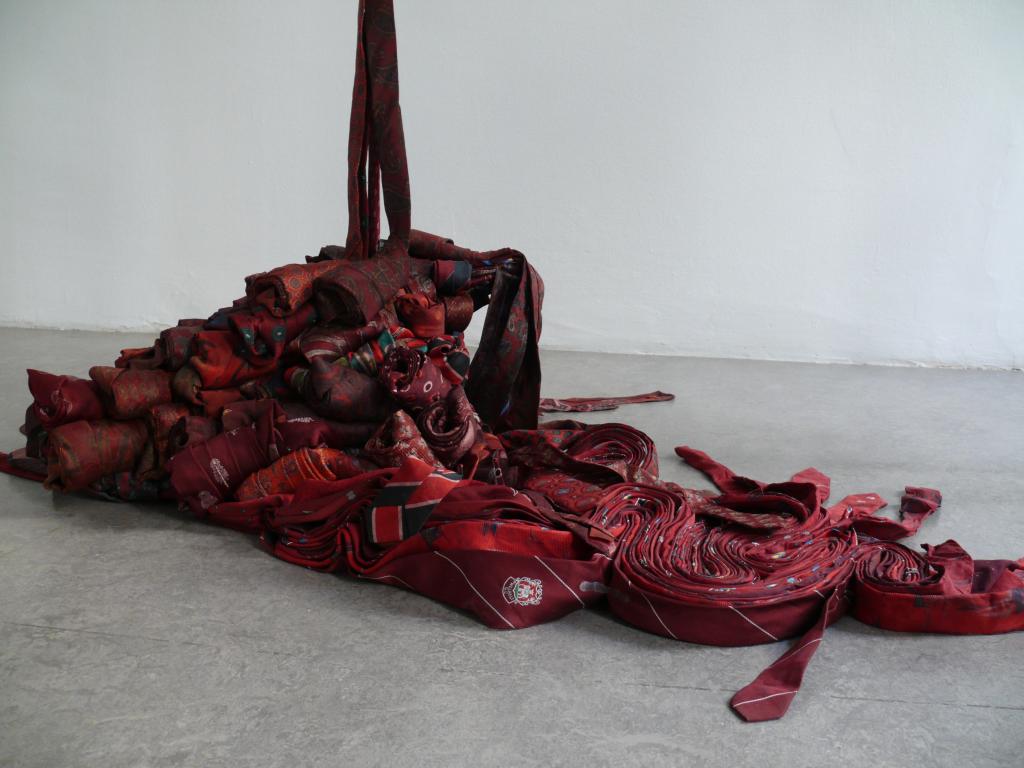 Alberto Peola Gallery is pleased to present Svelando l'utopia, a project that brings together three women artists from the new international art scene.
Adeela Suleman, Naiza H Khan and Seema Nusrat belong to the cultural elite that is playing a decisive role in promoting progressive thinking and social advancement in modern Pakistan - little is known of them outside Europe. When assessing their aesthetic experiences and the new art scene in Karachi it is important to bear in mind possible cultural comparisons and clashes with India and its new identity as a superpower.

It should not be forgotten that the culture of the two nations springs from the same source, in the Indian subcontinent, before flowing into two tributaries that feed and often give rise to parallel experiences in India and Pakistan. But this is only part of the story: artistic experimentation in Karachi expresses, perhaps, a stronger desire than that felt in India to tap this common territorial identity in order to re-establish a geography of the soul that can make up for the divisions that geopolitical forces insist on accentuating. The Karachi art scene is not only concerned with making these shared territorial origins the final destination of its research. On the contrary, it is one of the starting points, one of the foundations for successive developments along the path of individual artistic expression. Along these paths we also encounter various forms of social conditioning in different degrees which have their origins embedded in Muslim and Sufi traditions, and an inspection of broader social problems of the modern world such as female identity, class struggle and instability caused by a strong military presence. The result is a totally new and autonomous experience with regard to former pre-existing indigenous models, and different from results attained by their cousins in Delhi and Mumbai.

The work of Naiza H Khan offers the best example of how a stylistic and philosophical exploration can progress from local models until it rubs up against the most extreme human and existential experiences of global anthropology. And it is precisely an anthropological reading of her work that allows us to see the 'utopia' that Naiza H Khan is so keen to unveil. Her sculptures resemble the kind of jewellery as described in Bihishti Zewar, a text written in Urdu by the Indian master Ashraf Ali Thanawi. This text, which addresses a female audience, deals with different issues ranging from juridical to behavioural questions. In her work, Naiza H Khan has ventured across the whole culture of the Indian subcontinent at a tangent with respect to the reformed-Muslim matrix. From here she moves on and investigates those themes that are so often stereotyped and demonised by western media (the burka, the veil and womanhood denied). Crossing over into our own culture, the work of Naiza H Khan (metal corsets, chastity belts…) reminds us that we too have humiliated women's identity in the past, and that even now women in western society are considered objects of pleasure and consumption, and their physicality has been shackled with the appendices of masochist and fetishist rituals. In this way the sculptures by Naiza H Khan can also have a strong symbolic impact.

In its own individual way the relationship between object and fetishism also plays an important role in the work of Seema Nusrat, where leather belts, ties, fabrics and everyday objects carry the weight and status that behavioural patterns have invested them with. It should also be added that, as with the work of Nusrat, the body's physical absence plays an important role in the work's meaning. Her sculptures define the space around the absent body but should not, as such, be read as its negation - instead they give a strong allusion to the body itself. The visual impact of her work recalls the decorations and the cryptography in Islamic mosques, where the absence-presence of God is the focus of worship. The apparent casualness of form in Nusrat's sculptures also leads us to consider the absence of a precise stylistic order. But this is also an illusion, as everything has been studied, calculated and balanced with near manic determination. The work tells its own story and refers to itself through the many hidden folds in the cloths, ties and belts. Seema Nusrat's work tackles a more conceptual idea with respect to the contemporary experiments of the Karachi scene. It is the material, the idea and the form/non-form that triumph and herald the decline of narration.

If it is the utopia of cultural superiority that is denounced in the work of Naiza H Khan, or the utopia of form in the sculptures by Seema Nusrat, it is the utopia of meaning that plays a leading role in the work of Adeela Suleman. Ever since her earliest pieces the artist has been able to capture the ambiguous nature of a work of art by assembling the simplest everyday utensils that she collects during her pilgrimages to Karachi's markets. In her hands, bowls, vases and cups are transformed into helmets and protective headwear; motorcycle exhaust pipes, taps and tubes become abstract sculptures that swing precariously between full and empty. And yet this multivalence of the form tempts us to conjecture on the multivalence of the internal structure of the object. This condition is most evident in her latest series of work - apparently more narrative - in which the artist appears to allow the material to take on a more precise form. This is the case with the installation Big Tree where a large tree has attracted a number of objects to it, objects Suleman has chosen because of their metaphoric content. "The whole idea that they can be moved and placed differently and would change the story excites me," says Suleman. And this is the real declaration of its poetry. Taken individually the tree, supreme natural symbol of dynamic growth; the parrot, bearer of secrets in Pakistani tales and possible discloser; the peacock, a symbol of solar radiance and immortality whose cry, however, in Pakistani legends heralds the arrival of death; the roses, symbol of death and resurrection mean little, but interacting they become charged with a multitude of meanings that are determined by the variation of the roles that the object tends to take on in any of the myriad possible scene changes. And this is what Sulemnan would like to happen. In her work the different elements cohabit not only with their own refined poetic visual quality but also with a precise semiotic meaning.