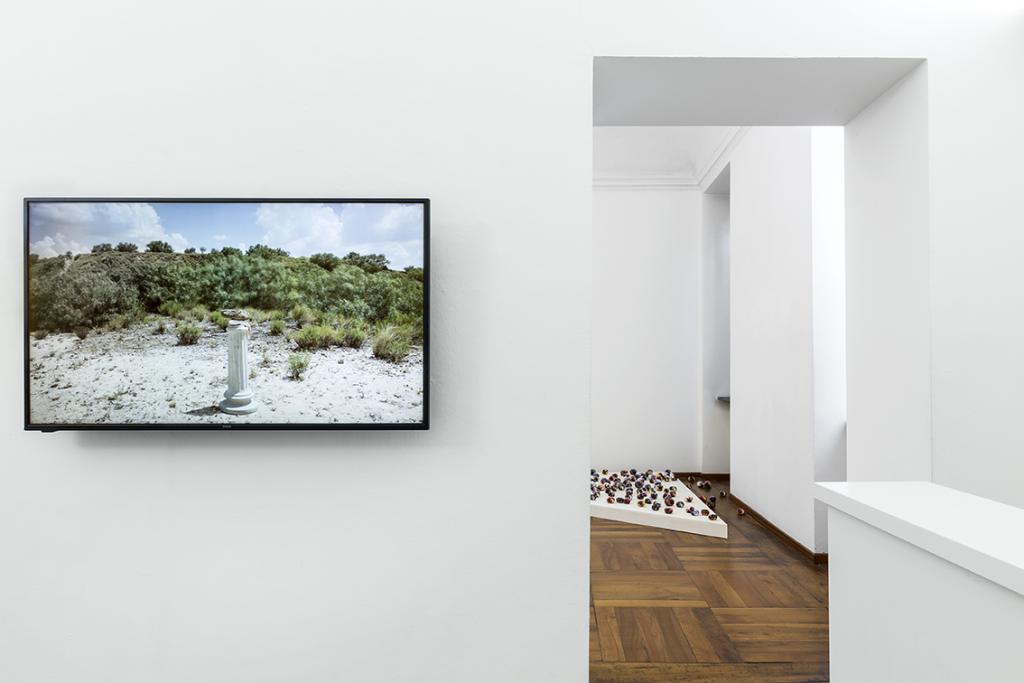 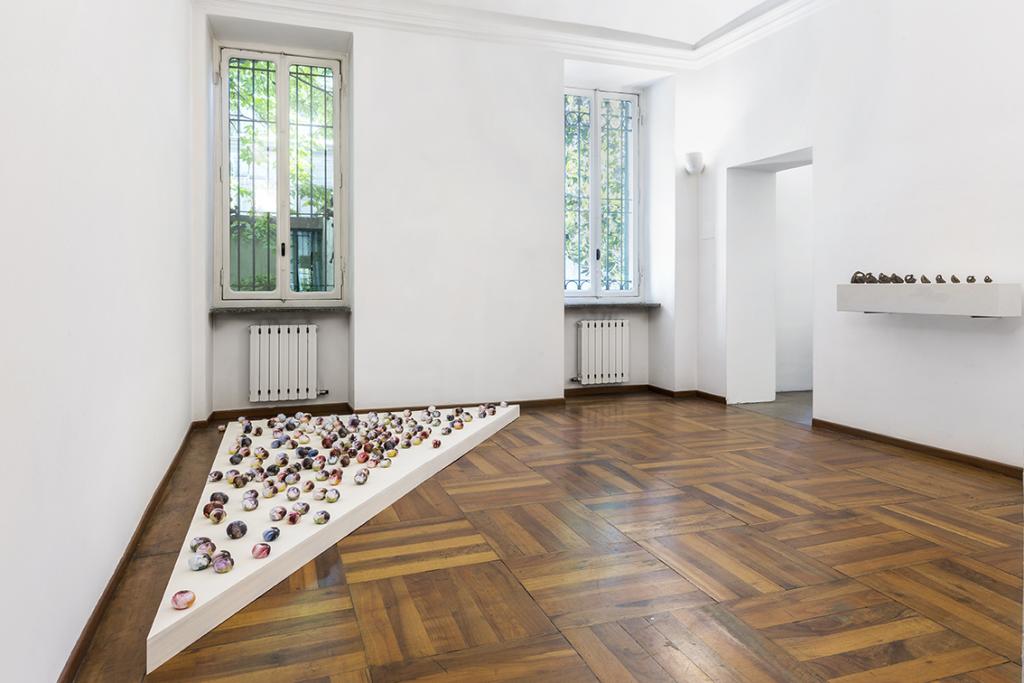 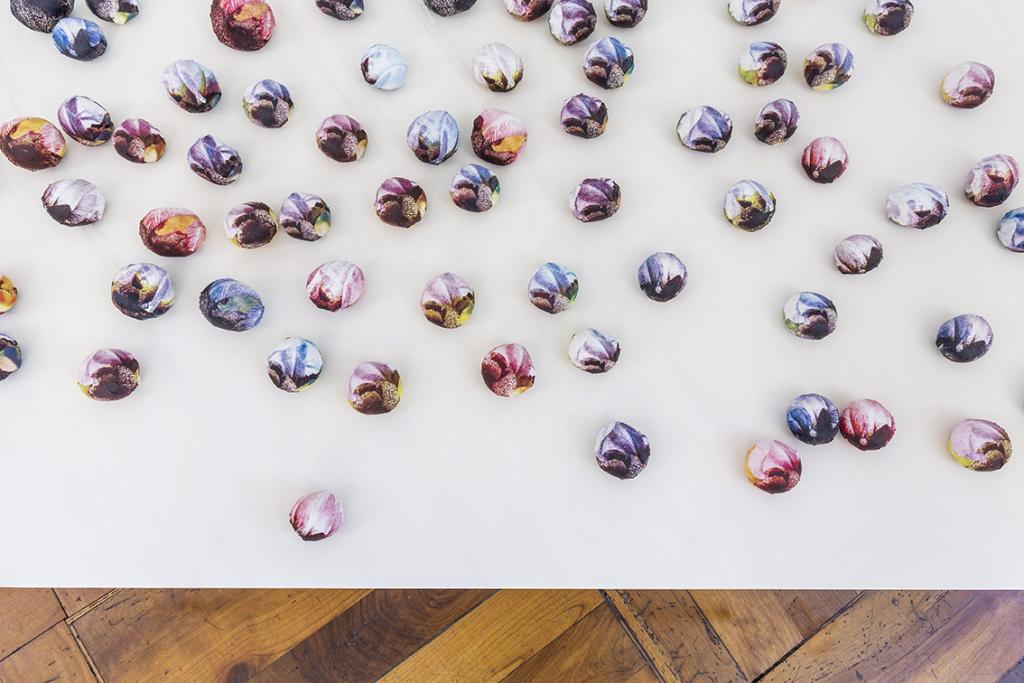 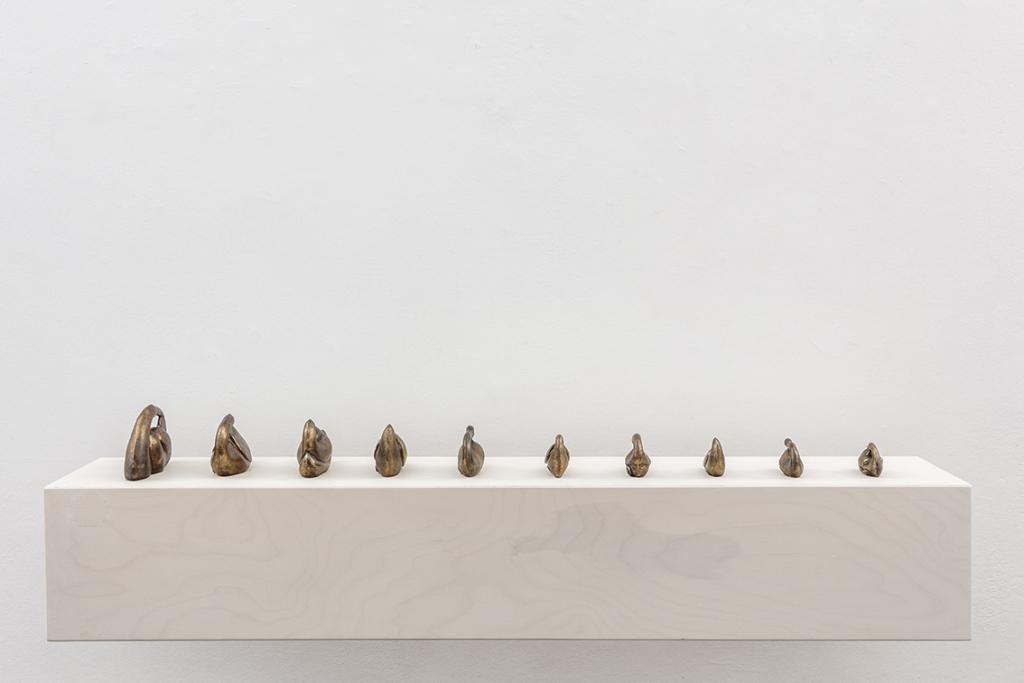 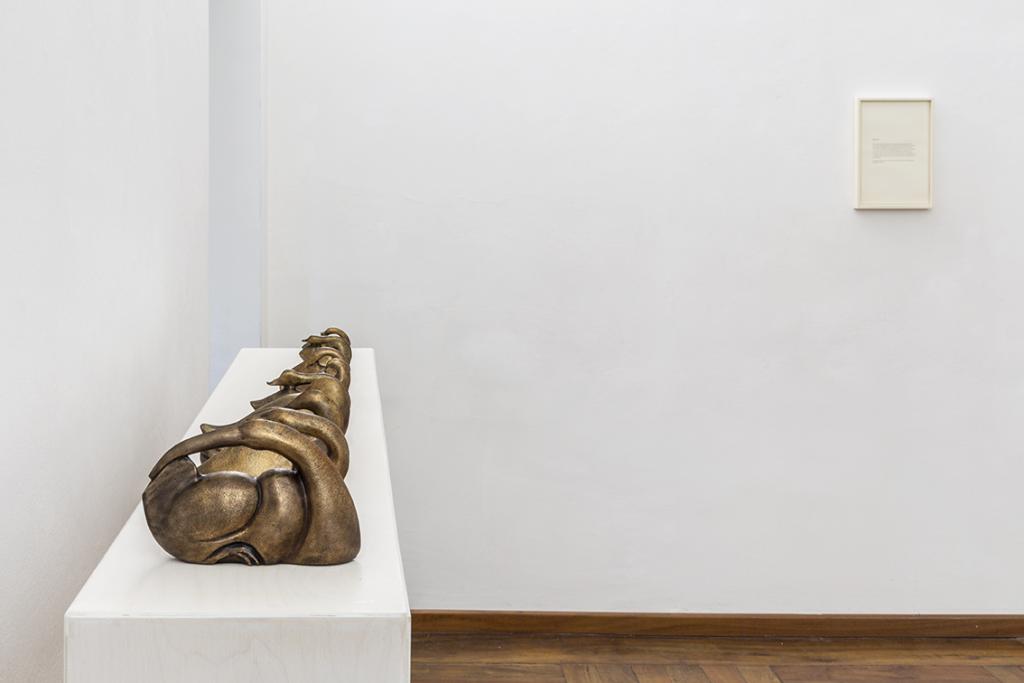 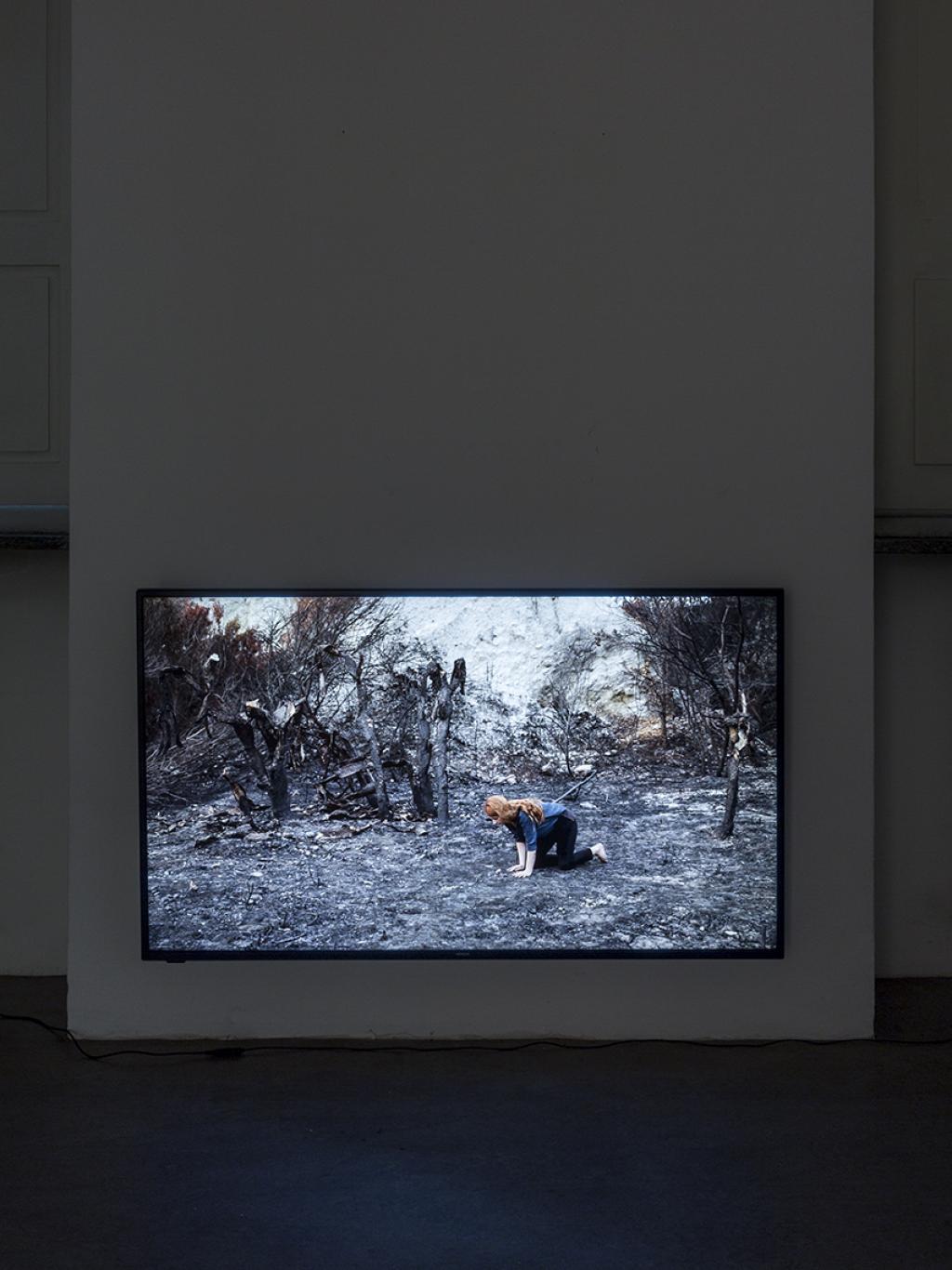 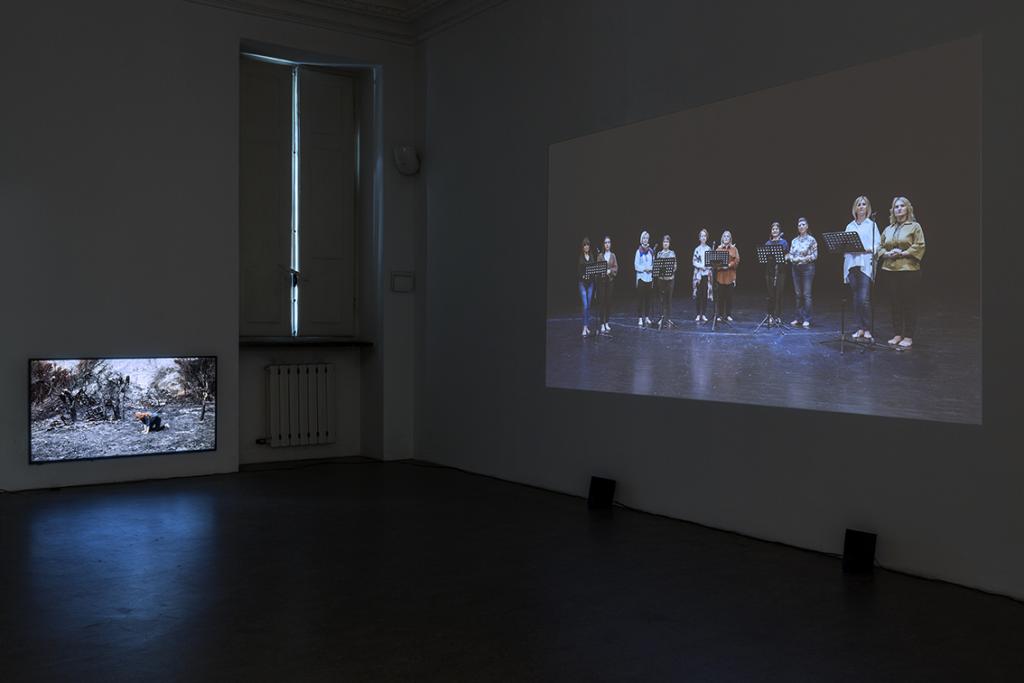 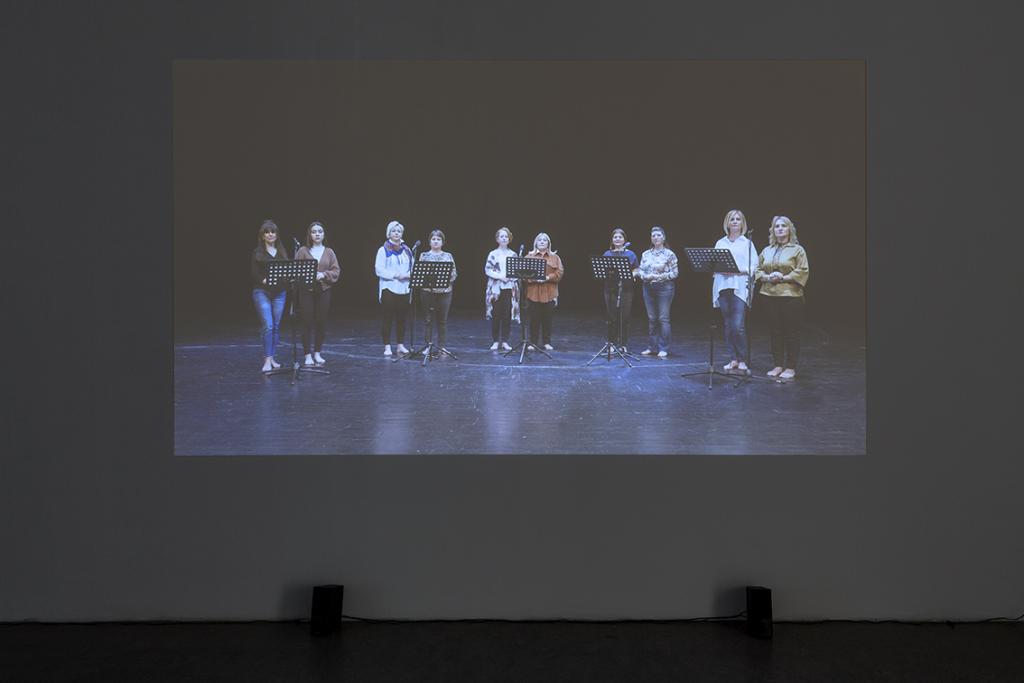 Fatma Bucak has chosen as the title of this exhibition a term taken from the system of musical notation, Prestissimo. It is an indication of tempo that can be performed in many different ways: extremely fast (estremamente veloce), as fast as possible (quanto più veloce possibile), very lively (molto vivo), very fast (molto presto), faster than very fast (più veloce di presto).
Her works, on the contrary, are characterized by a slowed down temporality, almost imperceptible in its flow: perhaps an Adagissimo, which in music corresponds to very slow (molto lento), extremely slow (estremamente lento), slower than slow (più lento di largo).

The acceleration to which the artist alludes is that of climatic changes and their consequences on the forms of life on earth, and of the geopolitical conflicts that dramatically amplify their impact. The slowness describes the strategy Bucak has chosen to adopt in her work, a tempo made of research and care, of compensation and transformation, of recovery – always in indirect ways – of forms, materials, and sounds that risk being obliterated or that have already been lost, and which can be saved or redeemed only if translated into different forms, materials, and sounds.

The exhibition opens with the fixed frame of Man is dead: a column in a semi-desert landscape that does not support architectural or celebratory elements, but upon which rest a fish and a stone – a silent funeral rite where inorganic material seals with its weight the flicker of the living matter and the only thing that is allowed to make a movement, albeit infinitesimal, are the leafy branches.

The works in the second room are the result of a stratified and complex research, which connects various disciplines, places, and times. Perpetual lure and insistent fear has its starting point between Mount Hermon and the Golan Heights, a border – and conflict – area between Israel, Lebanon and Syria, militarized since the 1967 Six-Day War and once again a theater of military clashes during the Syrian civil war. Here the Iris Hermona grows, a vulnerable and today almost unattainable species of flower, threatened both by military operations and by widespread intensive agriculture. By using photographs and drawings as a starting point, the artist created silk-screen prints on thin layers of cotton and silk paper, which, through a delicate casting process, she then modelled into tiny stones, light and mottled like the petals of the Iris. The title underlines the tension between attraction and fear, between the seductive charm of flowers, the toxicity of their roots, and the threat of their sprouting among the clods of minefields.

The Sum of the misdeeds and consents and cowardly acts project has its roots in Iraq, where many bird species are at risk of extinction. In order to fix their shape and presence, the artist looked back to the tradition of the Sumerian and Assyrian dynasties, in which zoomorphic weights were manufactured in stone or bronze in form of lions or ducks, that bore the royal seal or inscriptions in cuneiform and Phoenicians characters. She drew inspiration from a duck-shaped weight that belonged to the National Museum of Baghdad and was lost after the sacking of the museum in April 2003. Coming from the Iraqi archaeological sites of Ur and Nimrud – itself almost completely destroyed in 2015 by armed militias – those weights were not mere measuring instruments, but rather emblems of power, guarantee of the value of goods, translation devices. In this installation, the measures of each element were determined in relation to the degree of vulnerability of the genus represented, in accordance with the Red List of Threatened Species drawn up by the World Union for Conservation of Nature. The greater the weight and size, the greater the fragility of the species in question, while bronze, an emblem of power and durability, is transformed into an indicator of precariousness and imminent end.

The theme of the destructive power of fire, at the center of the installation They burned it all, is anticipated by Black Ink, a short text printed in movable type with a special ink which the artist prepared by collecting and diluting the ashes of a book printed in the Kurdish language and those of a burned down publishing house. Tautologically, what is offered for reading is precisely the recipe that led to the creation of that ink, in which we can find the material traces of individual acts of interdiction and violence. Those acts exemplify the obstacles encountered by Kurdish communities in Turkey when trying to use their language and maintain and defending their cultural identity.

They burned it all flows in the cross-reference between two videos. In the first Fatma Bucak moves on the site of one of the many fires that broke out on the shores of the Mediterranean in the course of 2021, proceeding among the ashes and trying to grasp the sound testimonies of that event from the depths of the ground: the echo of the different way in which woods, leaves, metals burn and extinguish themselves. In the other, set on the stage of a municipal theater in Istanbul, five pairs of musicians are preparing to interpret a score, but, when the singing should start, everything stops. The risk associated with pronouncing words in the Kurdish language in a public space silences the voice of the women who should sing them. Again, the only possibility that remains is to listen: segmented into syllables and repeated like a lament, the phrase “Her tişt şewitandin” (“They burned it all” in Kurdish), which the artist has often heard during her research in the region, resonates off-screen.

To the risk of cancellation – of species, places, cultures – driven by acquisitive political power and economic forces, Fatma Bucak's work opposes not simple testimonies, but complex forms of mending, compensation, translation, capable of redeeming the loss in reinvention.