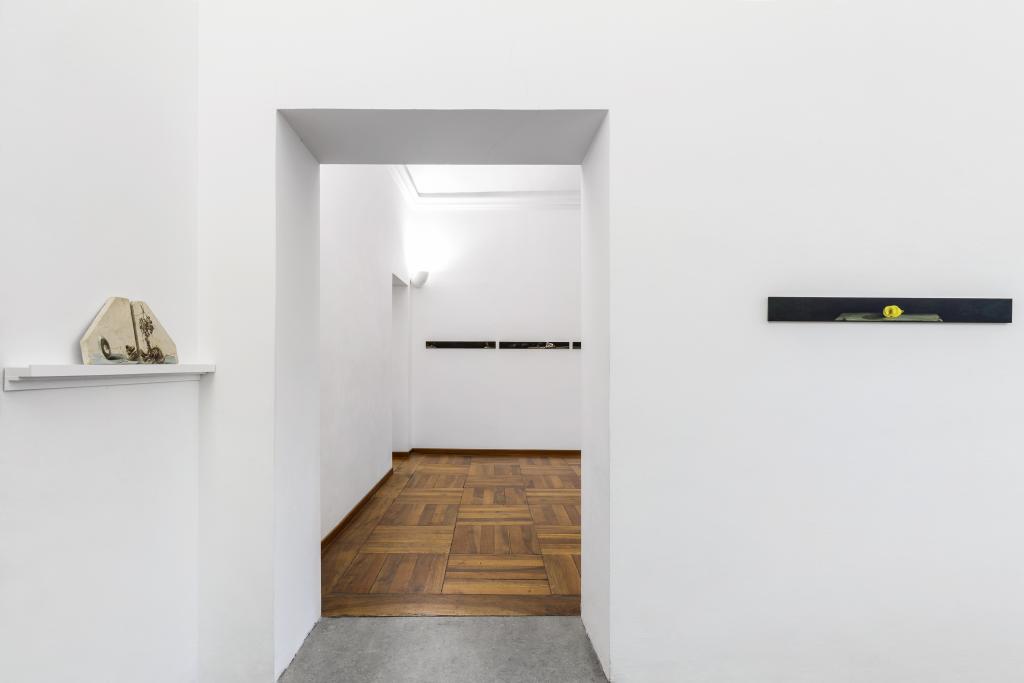 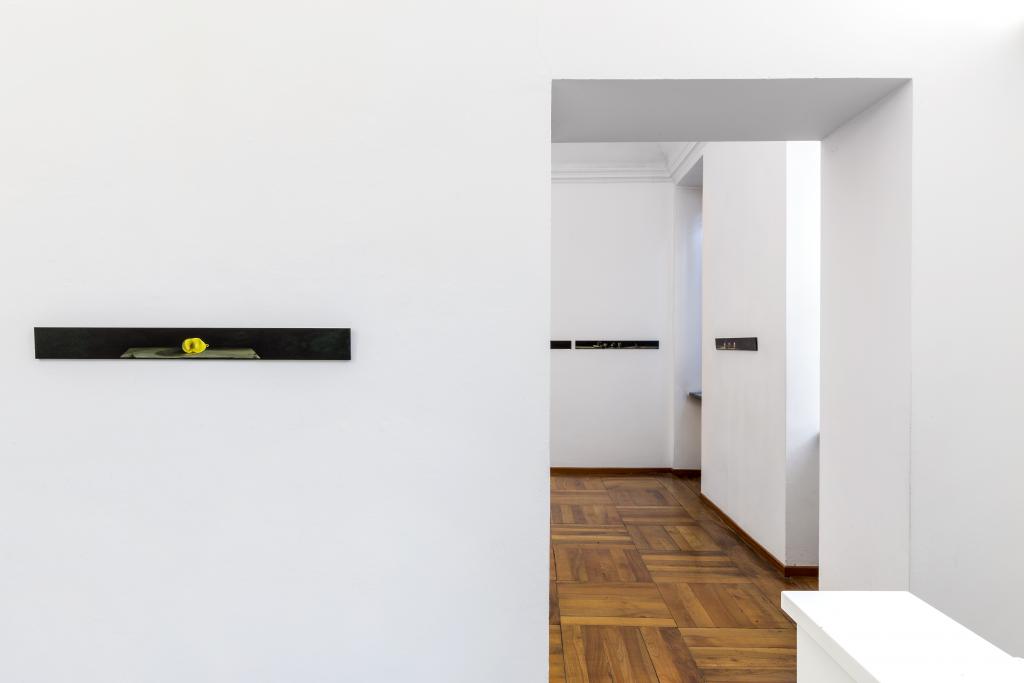 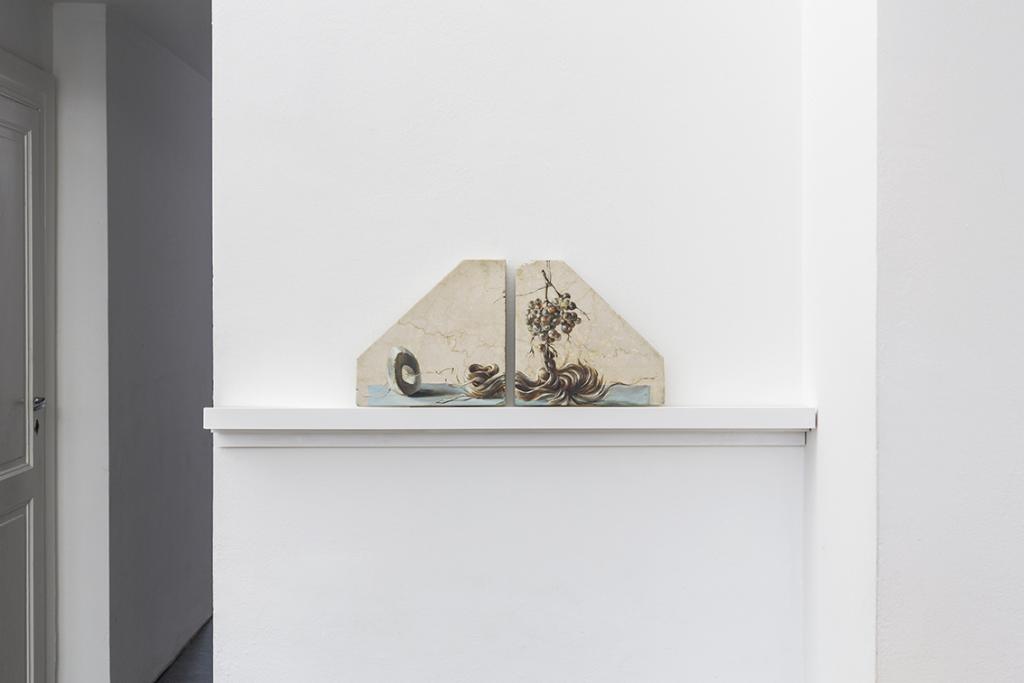 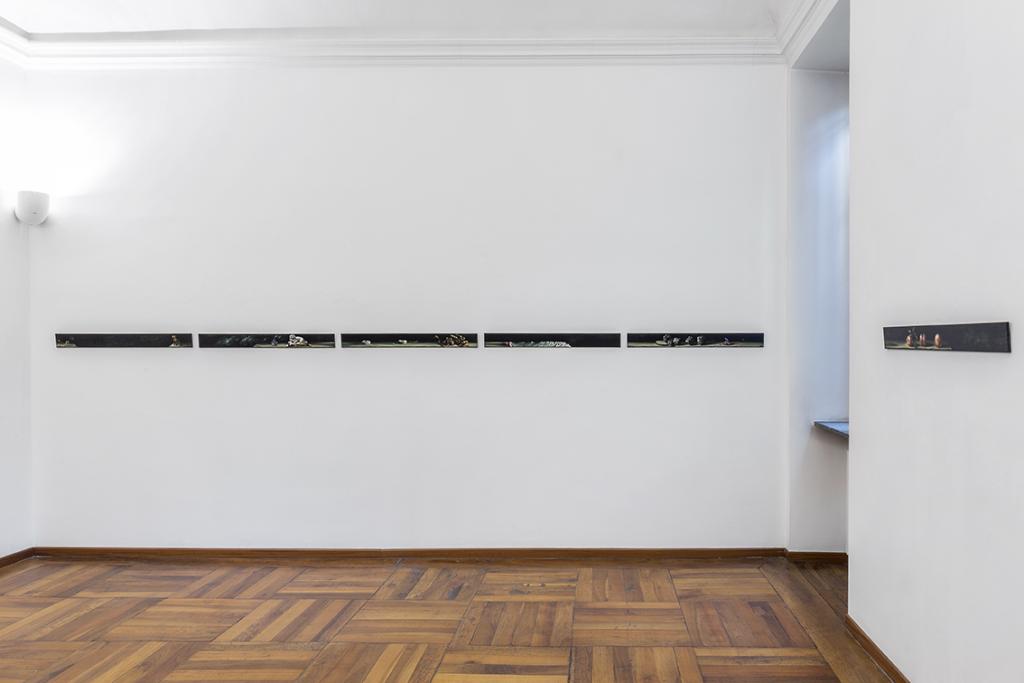 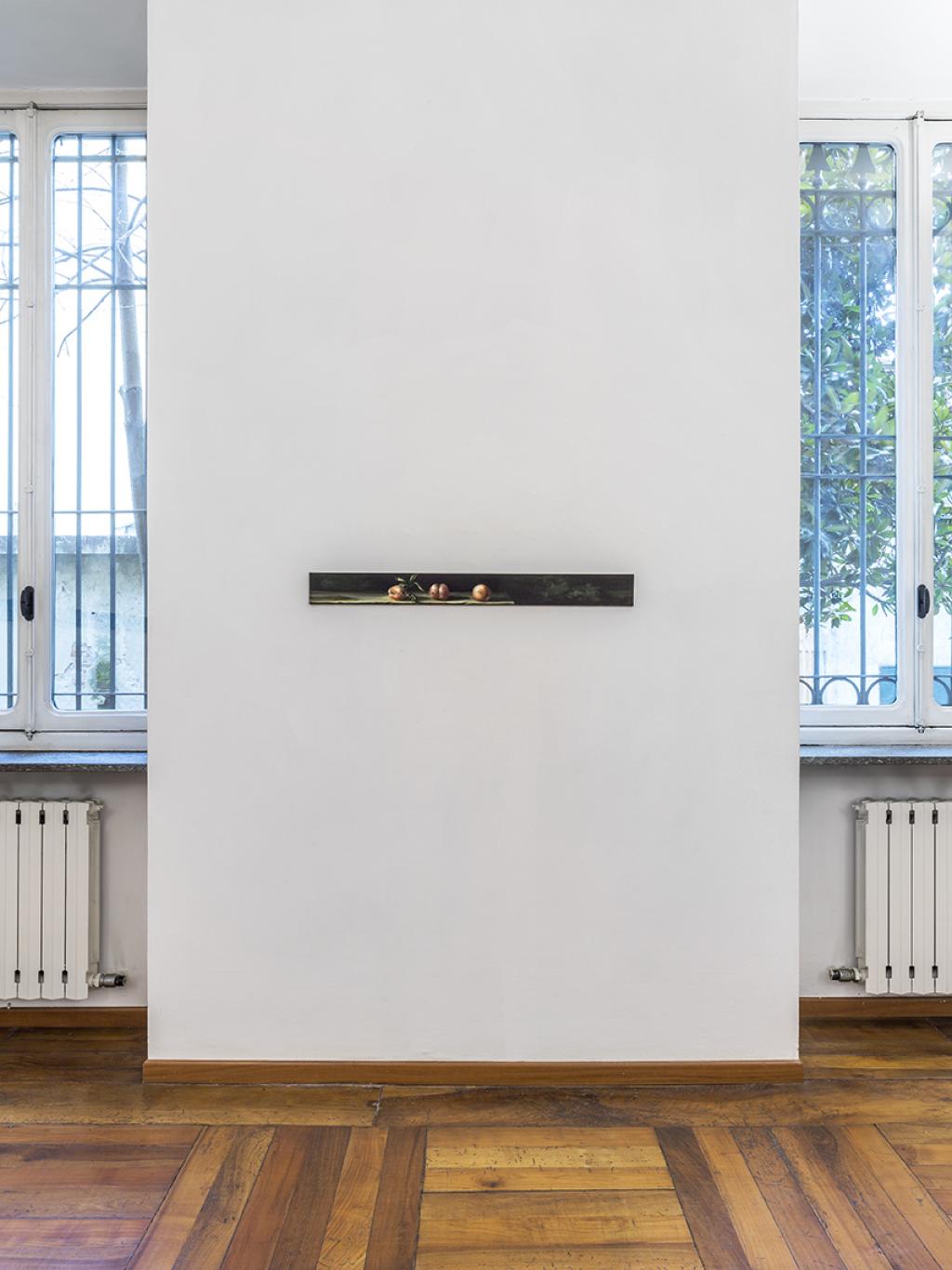 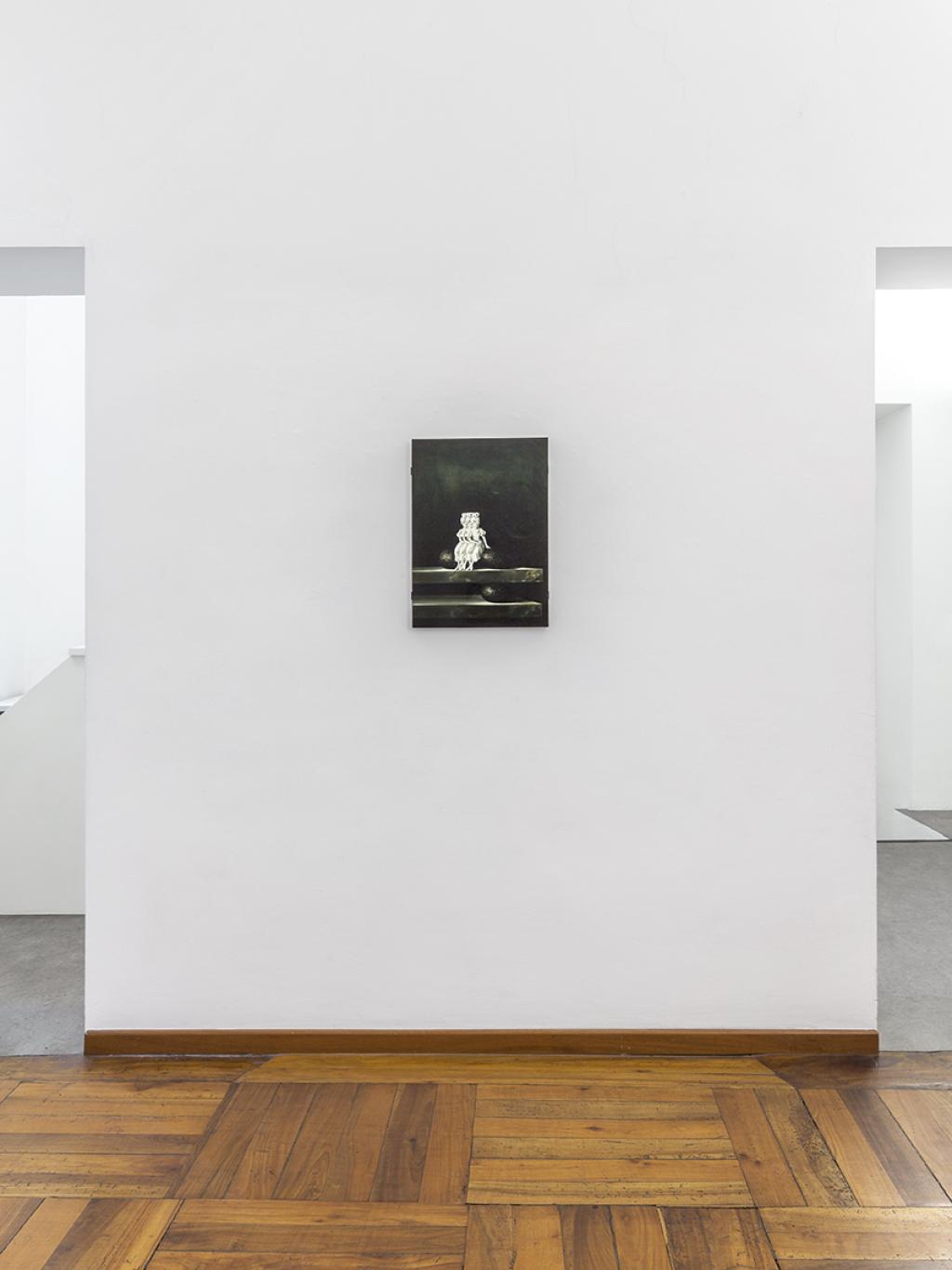 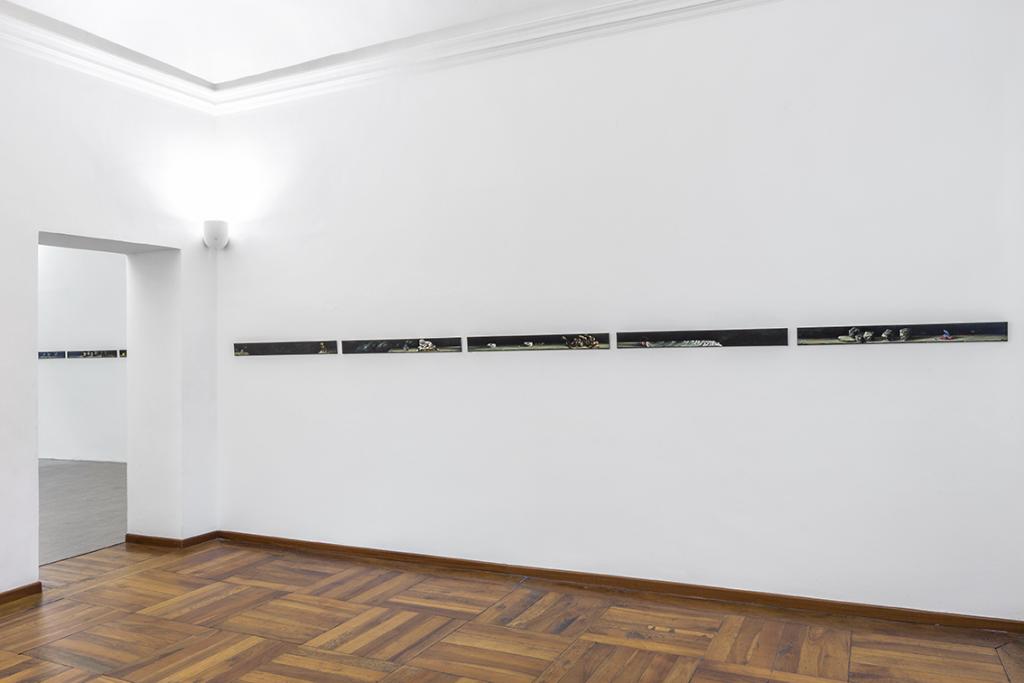 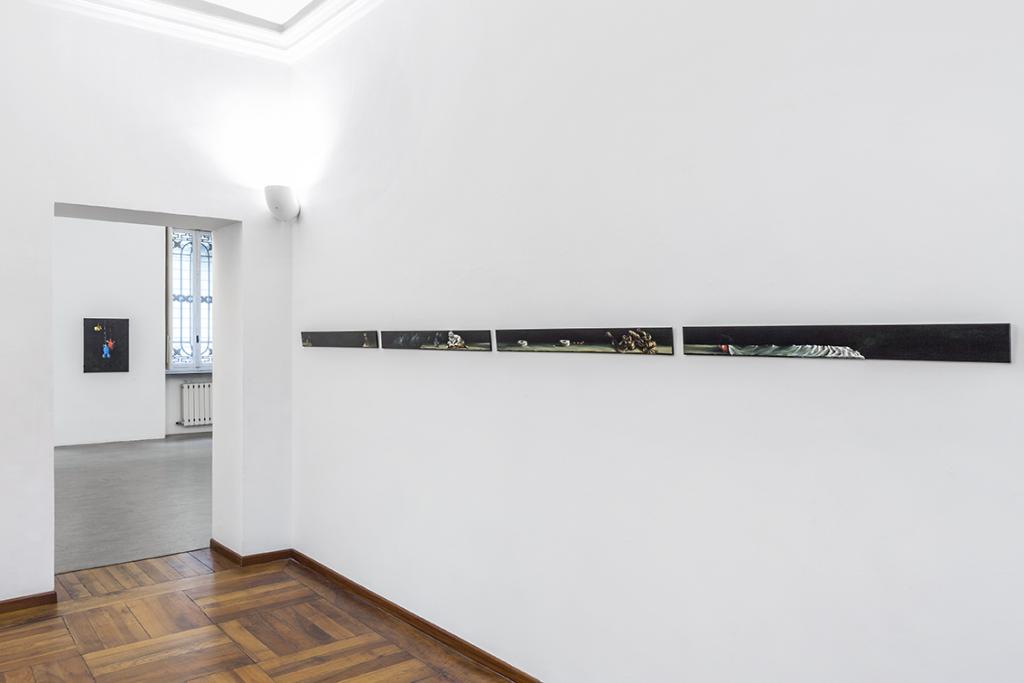 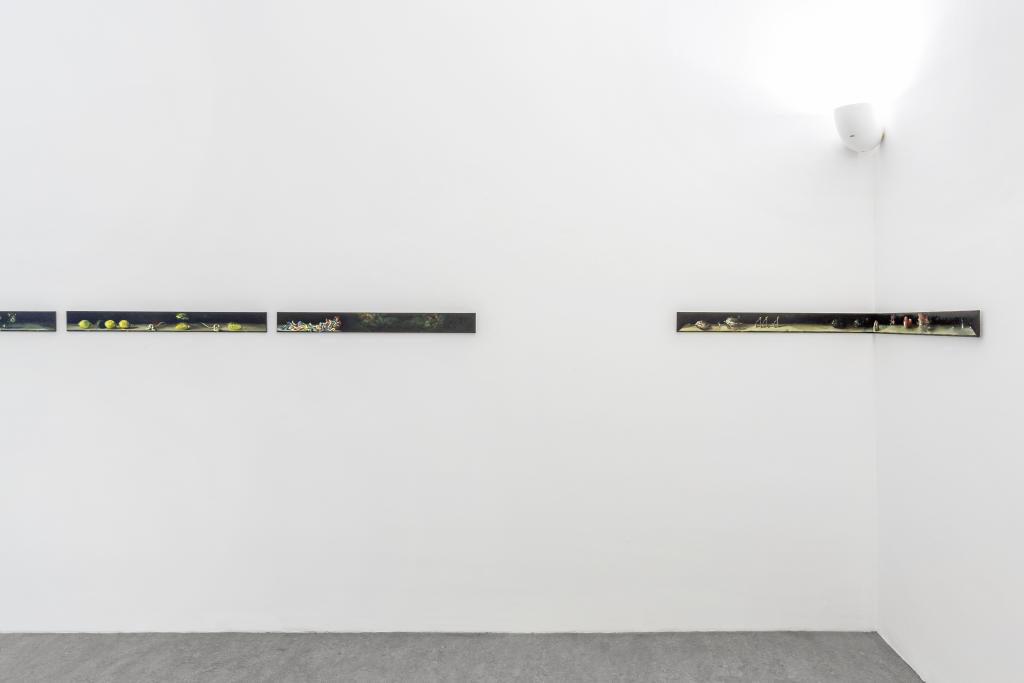 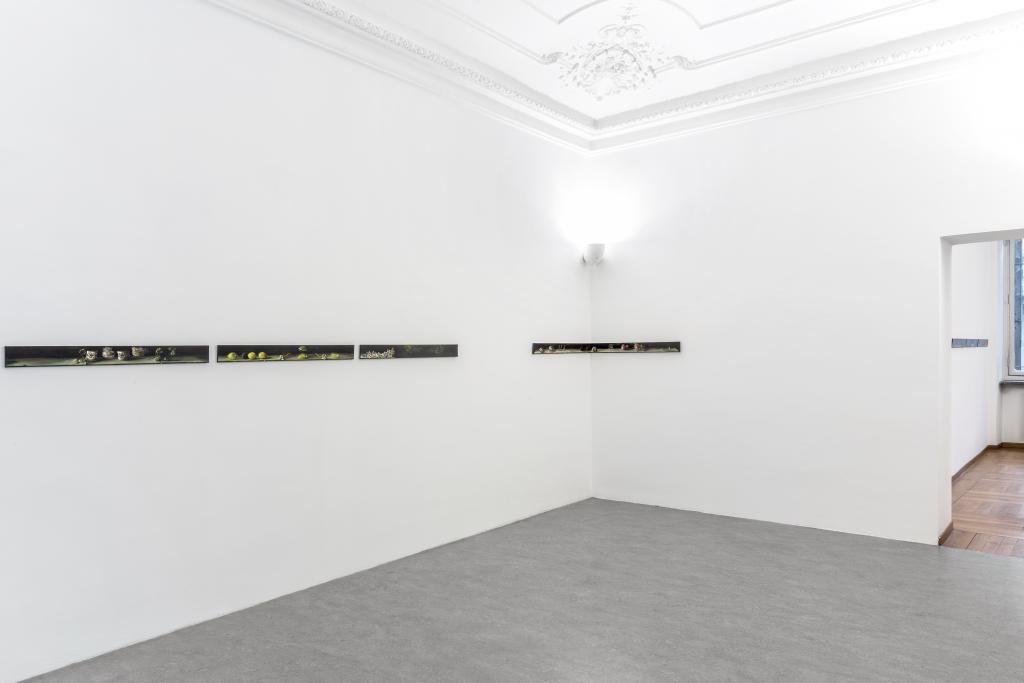 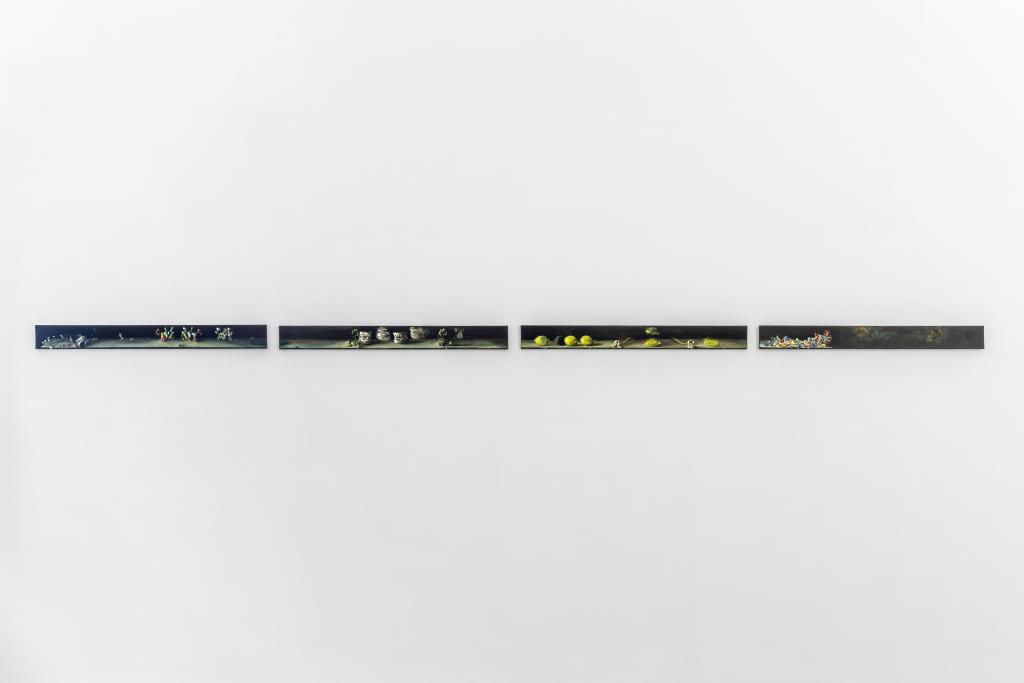 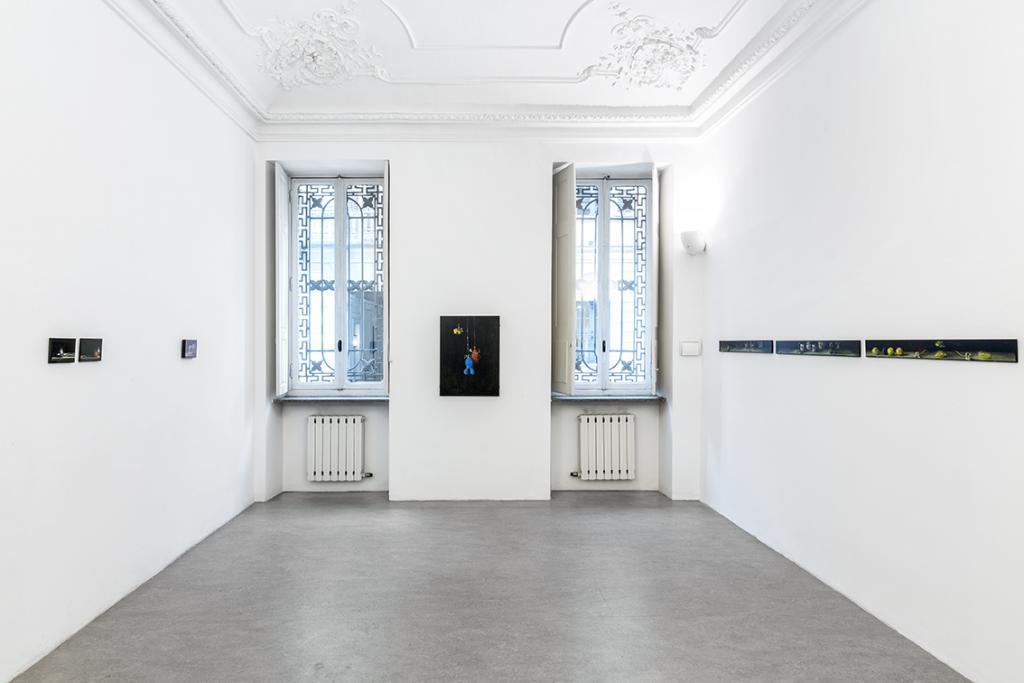 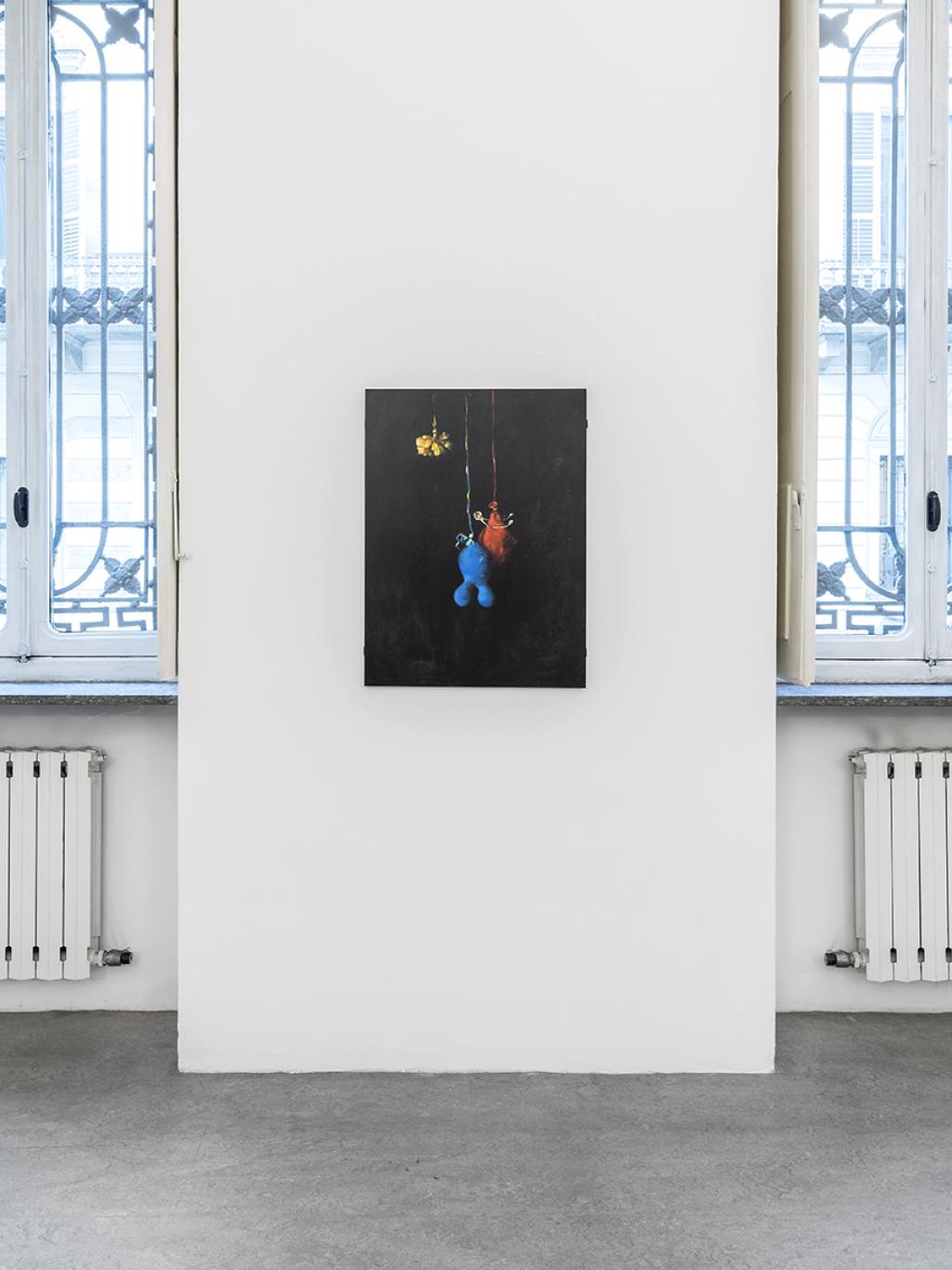 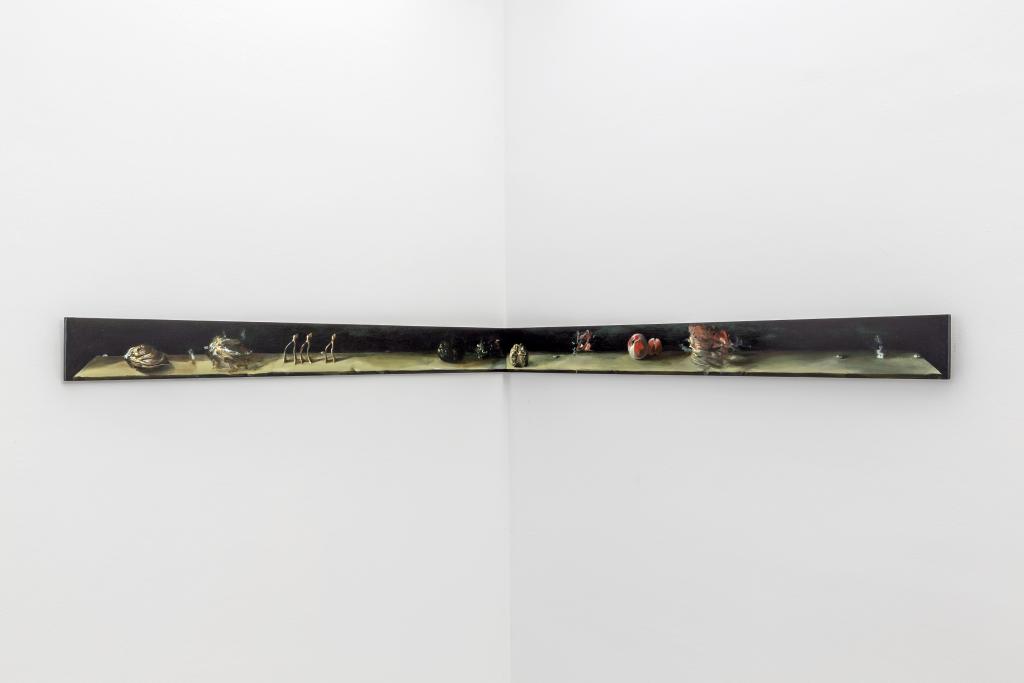 For her second solo exhibition at the Peola Simondi Gallery, Cornelia Badelita presents the Continuu project. The new paintings, made between 2021 and 2022, are panels of an unusual size, ten centimeters high and one meter long, arranged along the walls at eye level, at regular intervals. If from a distance they appear as serial modules, at close quarters they turn out to be original still lifes, whose elements occupy, one next to the other, a rough support surface.
​Badelita’s long panels stem from a reflection on the dais, the painted band that usually served as a complement to the altarpiece. Placed below the central section, it had both a practical function, hide the lower plinth of the frame, and a conceptual one, extend the narration with accessory scenes. From a linguistic point of view, each dais is a parergon, namely an appendix, an auxiliary element. Hence, Continuu has been envisioned as a long footnote, as a digression that extends beyond a narrative unknown to us. The inspiration for the cycle is the shocking panel by Hans Holbein the Younger depicting The Body of the Dead Christ in the Tomb (1521).
The painting, which haunted Fyodor Dostoevsky, is in fact a dais, a dramatic and majestic parergon, just over thirty centimeters high and two meters long, to the general narrative. From the scene, which follows the earthly life of Christ and precedes his afterlife, Badelita extrapolates the idea of ​​a suspended time and place, in which the narrative seems to freeze. As a reminder of the work, a white cloth, alone, appears in one of the panels on display. In the elongated space of these modern daises, the artist unfolds unusual still lifes, in which the love for Flemish painting combines with the investigation into her obsessions and her own daily existence. Objects of affection that recount the experience of motherhood (colourful modular sculptures made from corn, streamers, balloons, etc.) are mixed with elements taken from the intimate paintings of Adriaen Coorte, a mysterious artist who lived at the end of the 17th century, of whom only a few works with a naive flavor are known.
The unadorned surface and the dark, blind background are a tribute to Coorte, as are the wild strawberries and peaches that Badelita scatters here and there and duplicates, generating a disturbing sensation of déjà vu in the viewer. In the artist's paintings, the duplication of images is meant both as a replication of iconographies and styles drawn from the history of art as well as a technical procedure in its own right. To satisfy this need for repetition, Badelita has built a new painting tool, which she uses together with the traditional ones: a double brush consisting of two brushes joined by means of a spacer. Difficult to handle, this tool produces images that are half sharp and half blurry, in which figuration and abstraction, will and chance seem to mix. Painting is thus free, finally wrenched from its mimetic implications. Badelita's paintings move cautiously along the border between figuration and abstraction, stillness and dynamism, inaction and narration, past and present, high and popular culture.
Be they daises or comic strips, sequences of allegorical images or automatic recordings of unconscious associations: classification does not matter. What matters most is that their putting into shape fulfils a diaristic, even therapeutic, function of a seismographic recording of the artist’s obsessions. It is therefore not surprising that the Romanian adjective continuu ("continuous") has been chosen as the title of the exhibition, in which the final repetition of the vowel "u" ​​– also graphically - suggests ​​a cadenced process, which has no end.