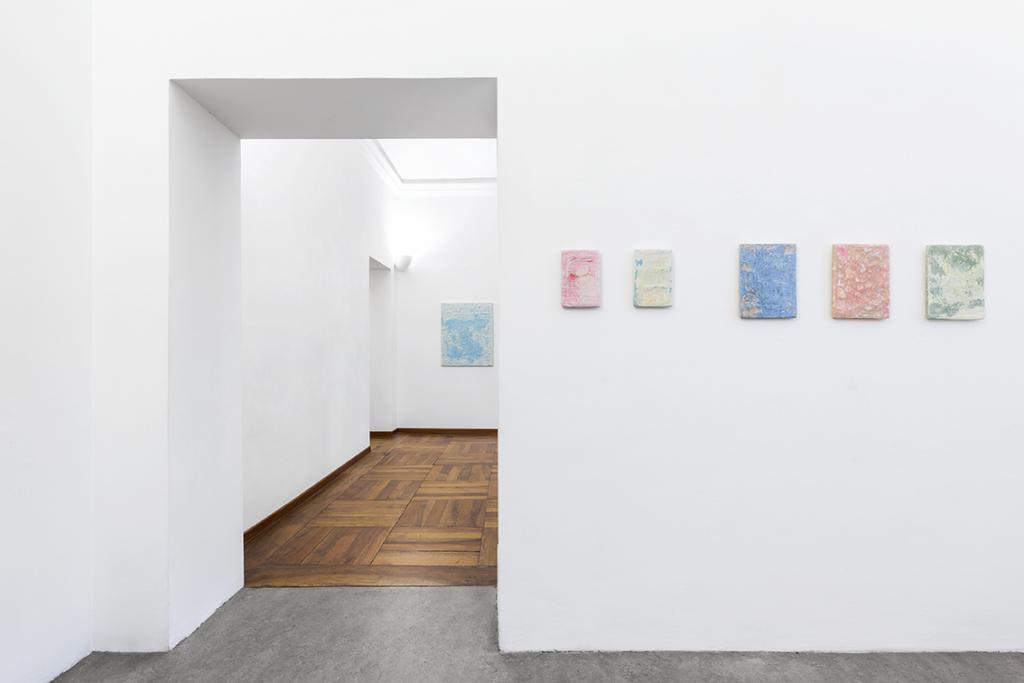 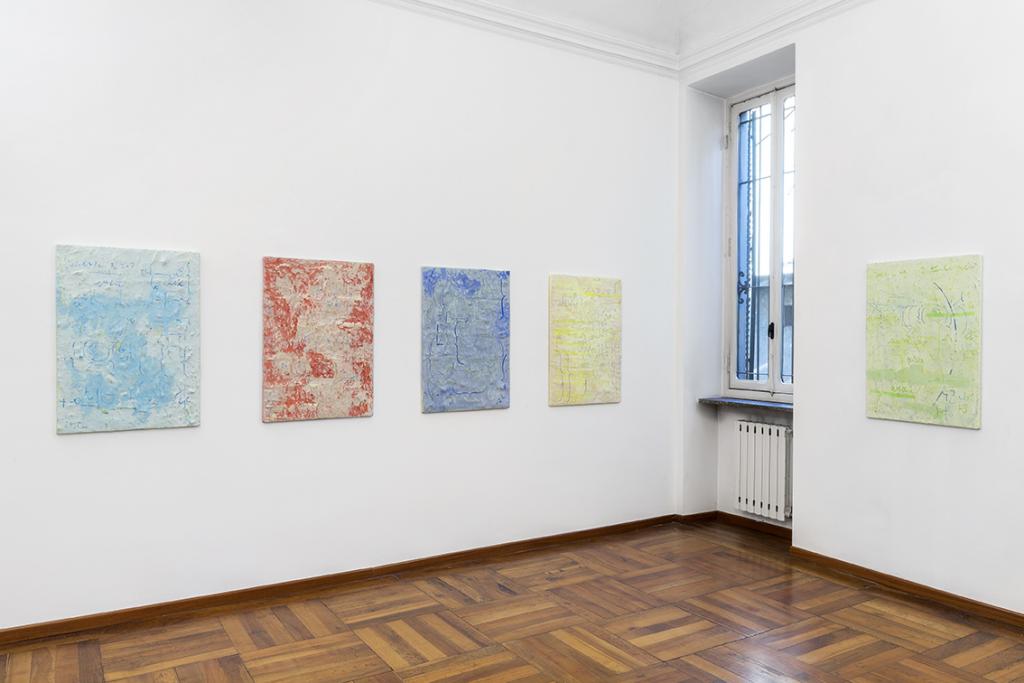 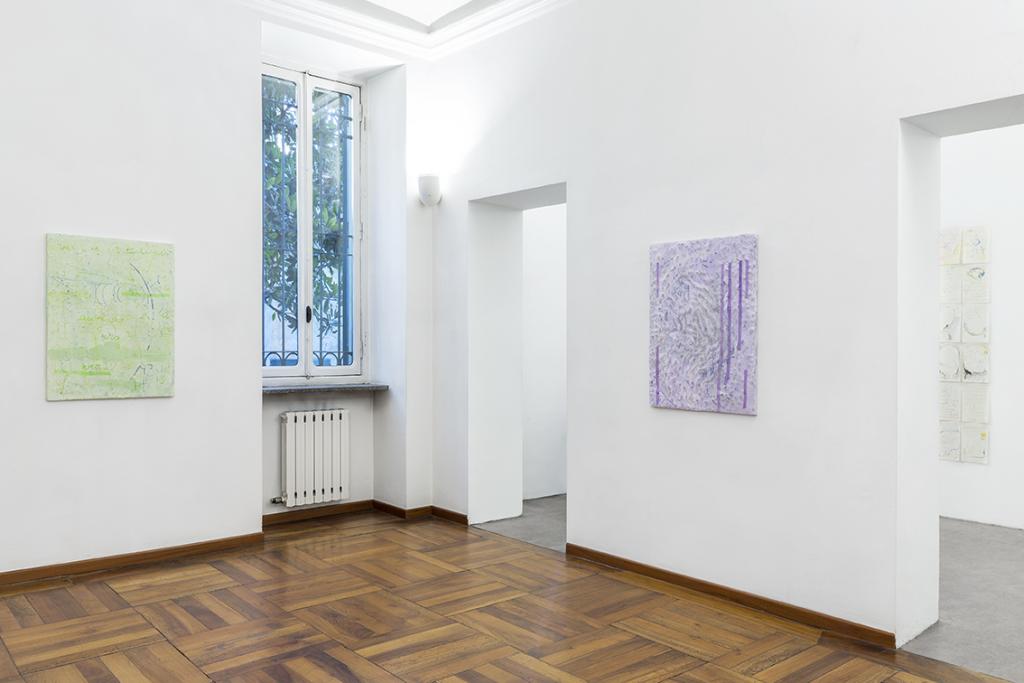 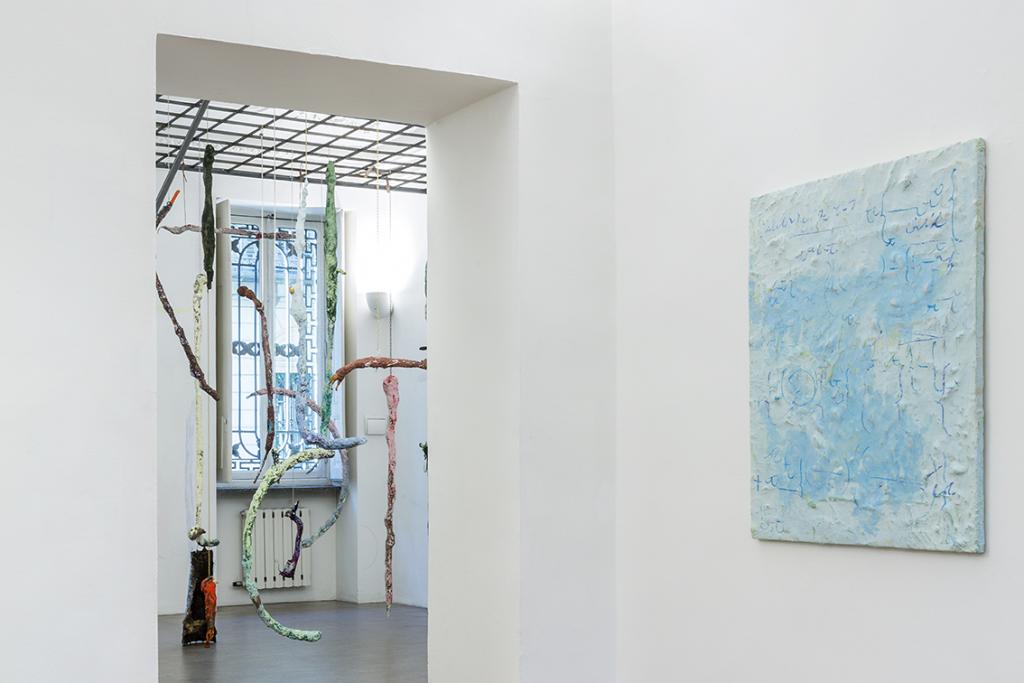 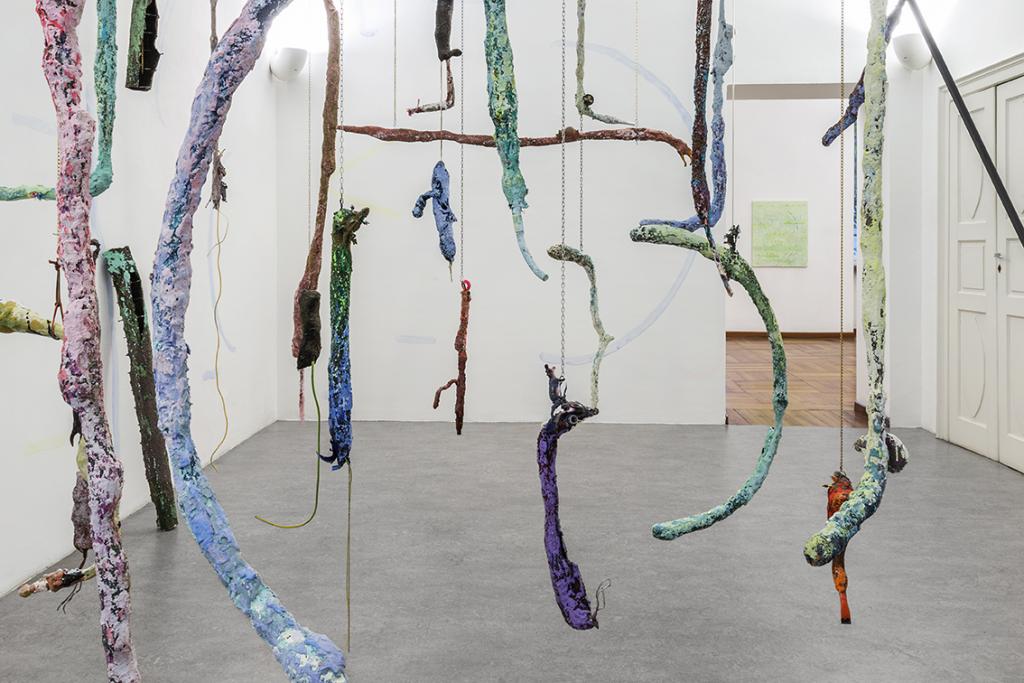 Wonder of mathematics. It is a written instrument capable of infinite perfection, a major proof of the sympathy and identity of nature and spirit
Novalis, Fragments, 1795 - 1800

The artistic research of Francesca Ferreri (Savigliano, 1981) investigates the relationship between restoration and mathematical algorithms as a poetic baseline for a sculptural process that analyses matter in its space-time and perceptual dimension.
Works made out of ceramic fragments and scrap iron, plaster and recycled elements, act as spatial entities endowed with formal freedom and convey an unexpected aesthetic energy.
The “space-gap” of the restoration, revealed in the combination of diverse objects and similar in its process to the unknown in algebra, outlines new volumetric identities, imaginary memories, reconstructed in a perspective of formal combination and chromatic integration.

On the occasion of her second solo show at the Peola Simondi Gallery, Ferreri presents Quiet, Mossy yet alive, a site-specific installation, the result of an investigation into the mathematical and musical meaning of matter. Diverse elements with multiple shapes and sizes congregate, as imperfect individualities, giving life to choral ensembles, music scores with infinite applications. The sculptures, resulting from objects or fragments grafted into shapeless matter, are hung with chains, electric cables or steel wires fastened to a metal framework. They speak to the viewer conjuring up parentheses, unknowns, mathematical symbols within a hypothetical Cartesian grid. It is an environment with no walls, within which some open, heterogeneous, indefinite coordinates move to compose a harmonious whole which varies according to the space. A wall painting intervention emphasizes the musical echo of the material that spreads to infinity.
In this way, it is not the number itself that is analysed, but the algebraic process in its etymological meaning of "completion", "union" or "reconnection", from the Arabic al-ǧabr. Algebra is indeed that branch of mathematics that deals with the generalization and extension of the relationships of arithmetic to variable entities.

Just as mathematics is a language that proceeds by hypothesis and verification and deals with the connections between things, similarly Ferreri’s conservation practice, resulting from her experience as a fresco restorer, reproduces the process of reactivation of memories, thanks to the creative and empathic possibilities that are hidden in the residual elements of society.

And it is precisely the interdependence of mathematical and organic elements that characterizes Ferreri's work: the natural dimension of form and matter and the fascination with infinity create an inclusive sculptural space, with countless possible developments. Quiet, Mossy yet alive can recall some installation works of the late 1960s by post-minimalist artist Eva Hesse (Düsseldorf, 1936 - New York, 1970), which, hung irregularly, form webs of knots, cables, latex and rope, thus breaking away from the stability and predictability of minimalist sculpture. In both artists open creative dynamics stimulate the viewer to think unconventionally.

The Math of Matter series, from which the exhibition takes its title, introduces the exhibition itinerary.
With these works, strictly connected to the installation project, Ferreri examines in particular matter and its slow stratification, looking at their relation to the gestural speed of writing.
Automatic writing, which the artist has been practicing in her everyday life for a long time, resurfaces here, regenerating itself in a mutual relationship with matter.
Tables of different sizes feature as stages in the constitutive process of the work, inviting the visitor to take part in the artistic research, in an alternation of emotions and states of mind. Plaster and consolidating resins, sand, glue, watercolour on wood and paper, are intertwined with algebraic-mathematical alphabets, symbols and operations, which create fantastic geographical maps and unusual worlds to explore.

"Writing these signs on matter is a liberating act for me" - Ferreri argues - "sometimes I consider it as “the oracle of the day “: the “x” symbol evokes an idea of ​​choice, while the line looks like a range of multiple possibilities, and the parenthesis can define a temporal pause”.