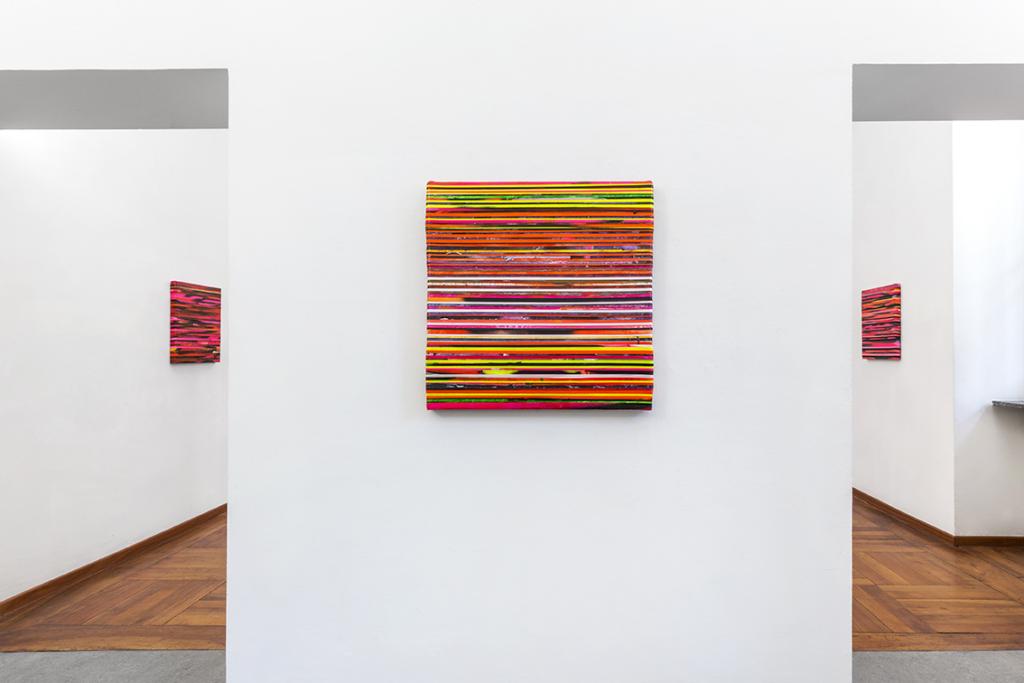 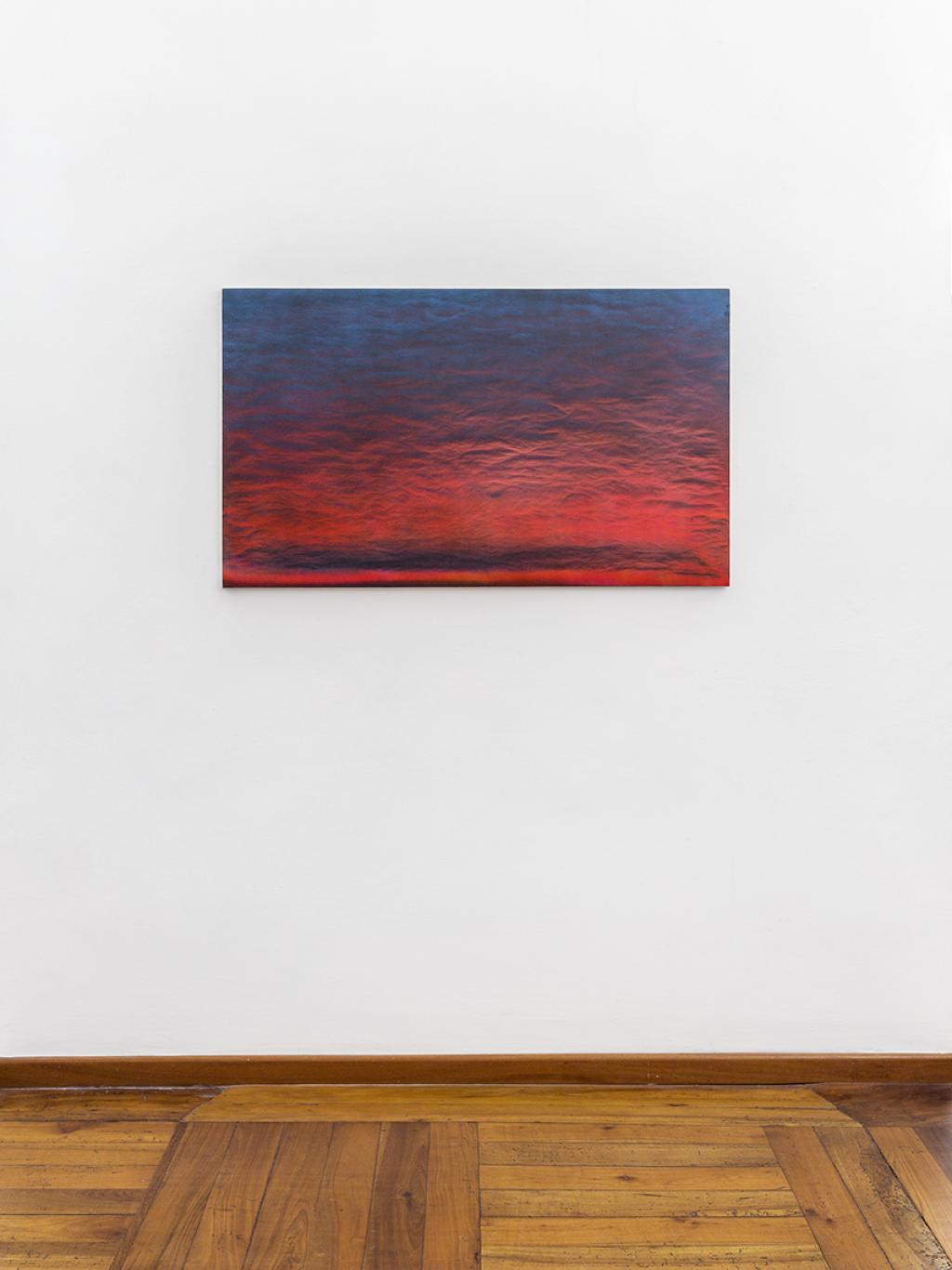 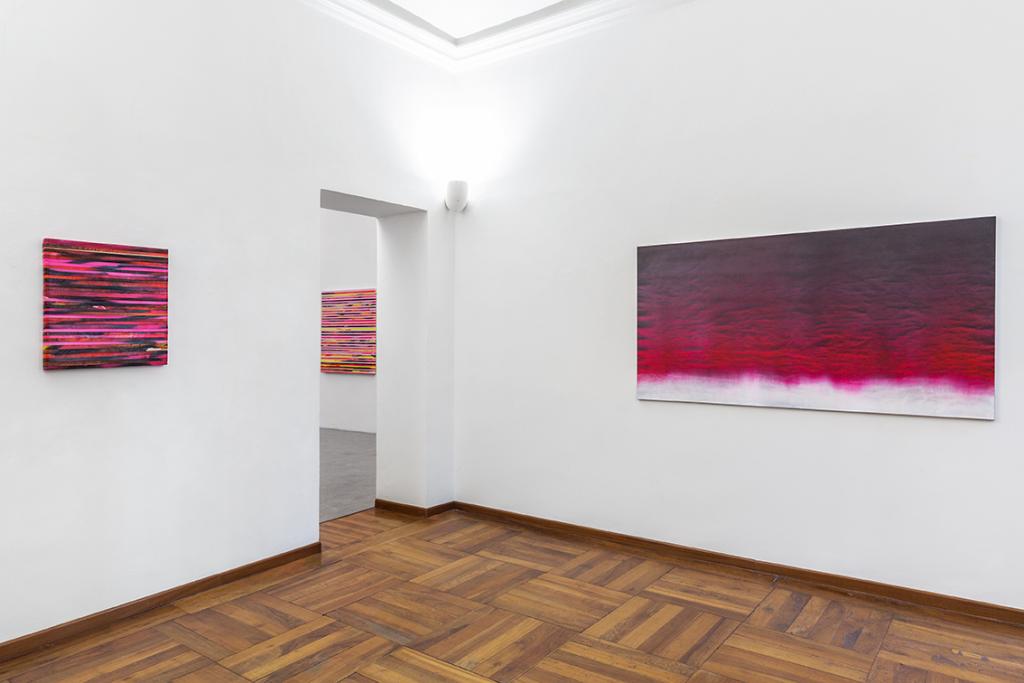 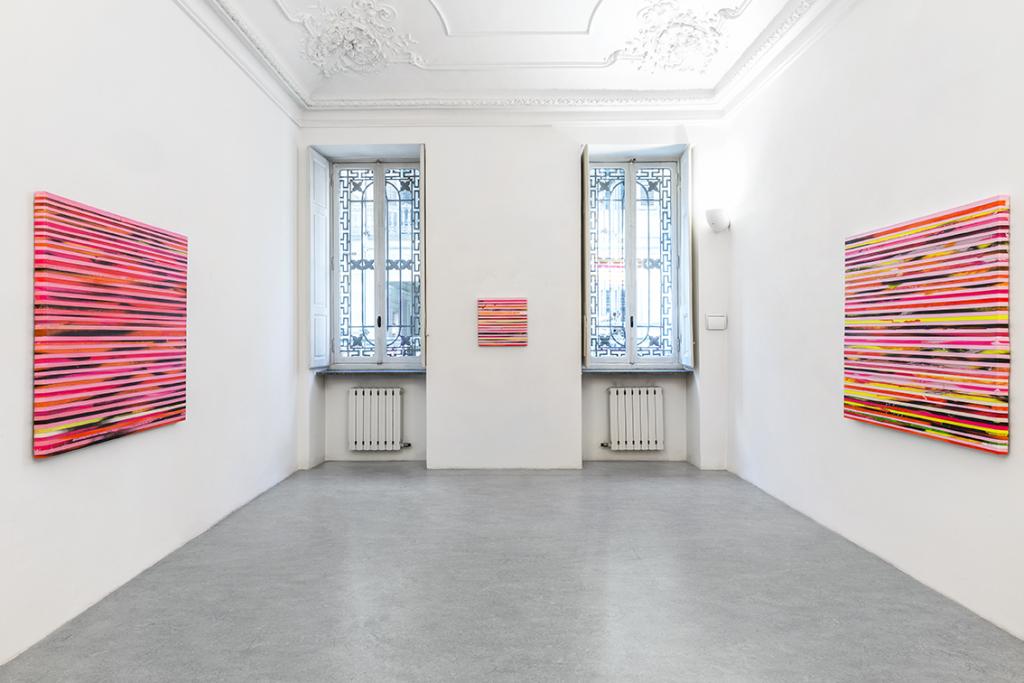 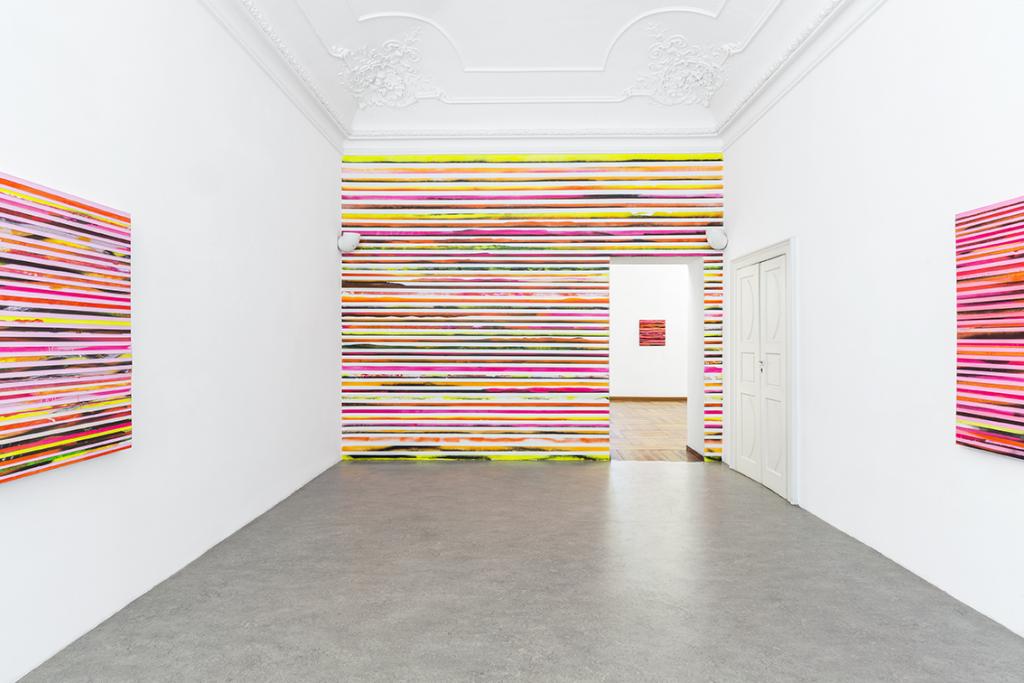 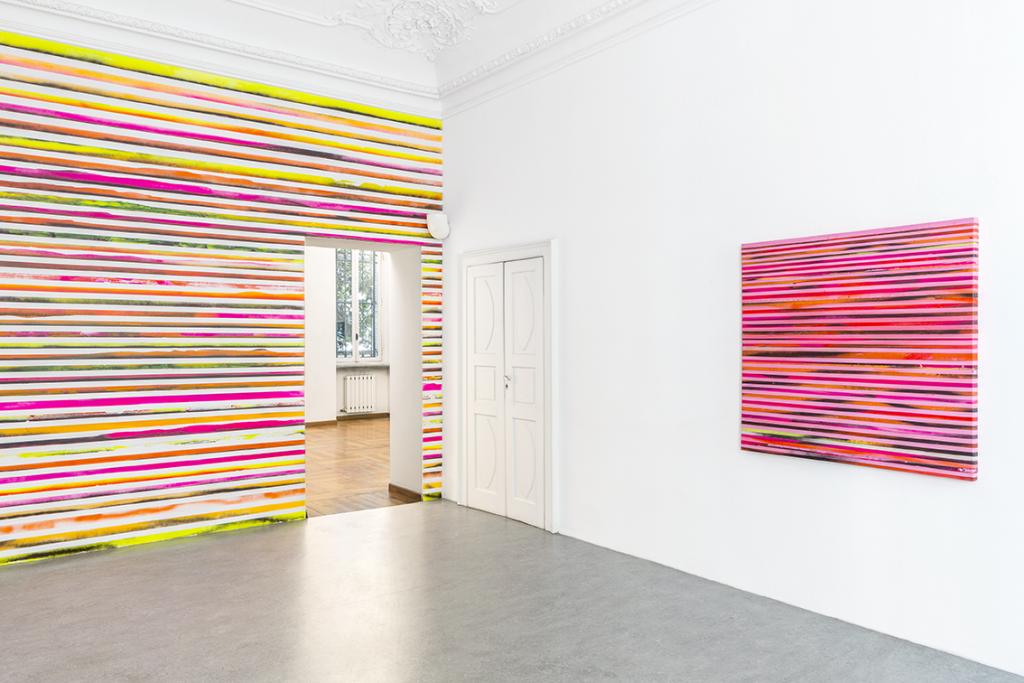 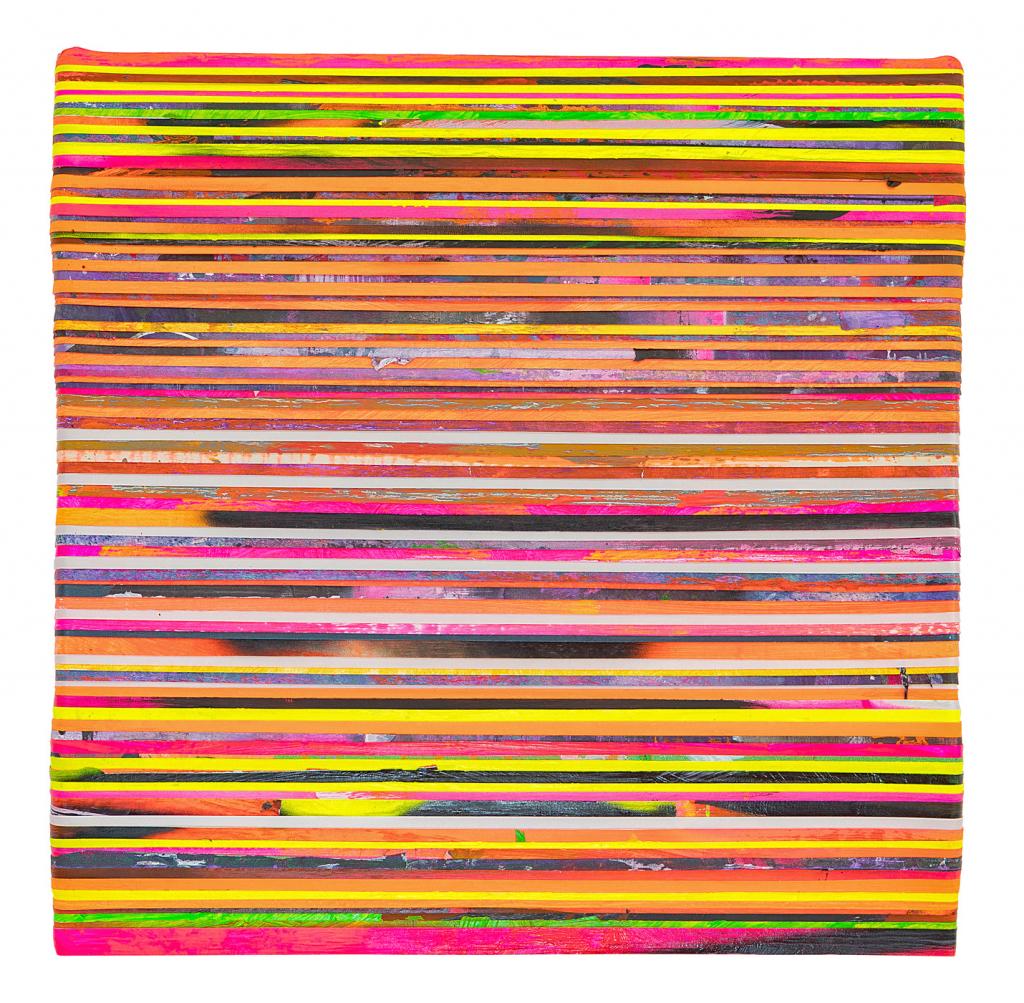 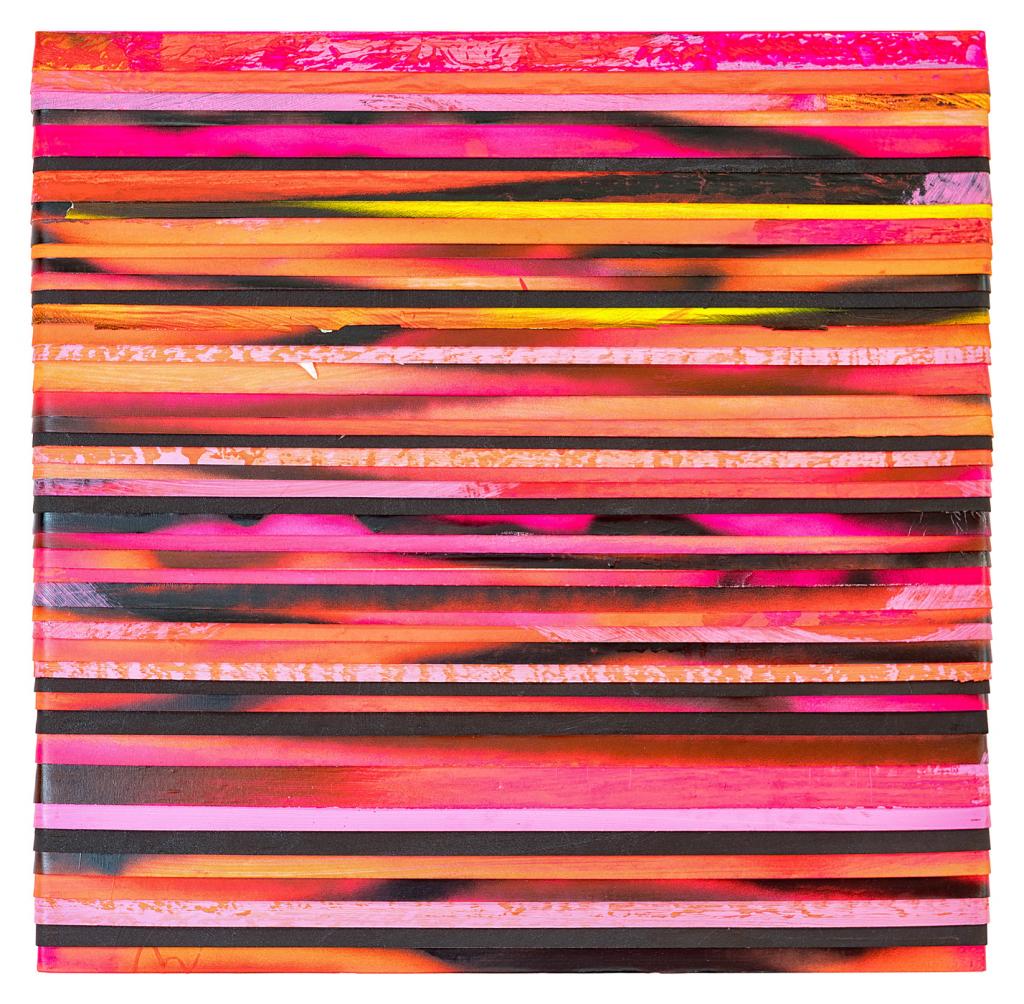 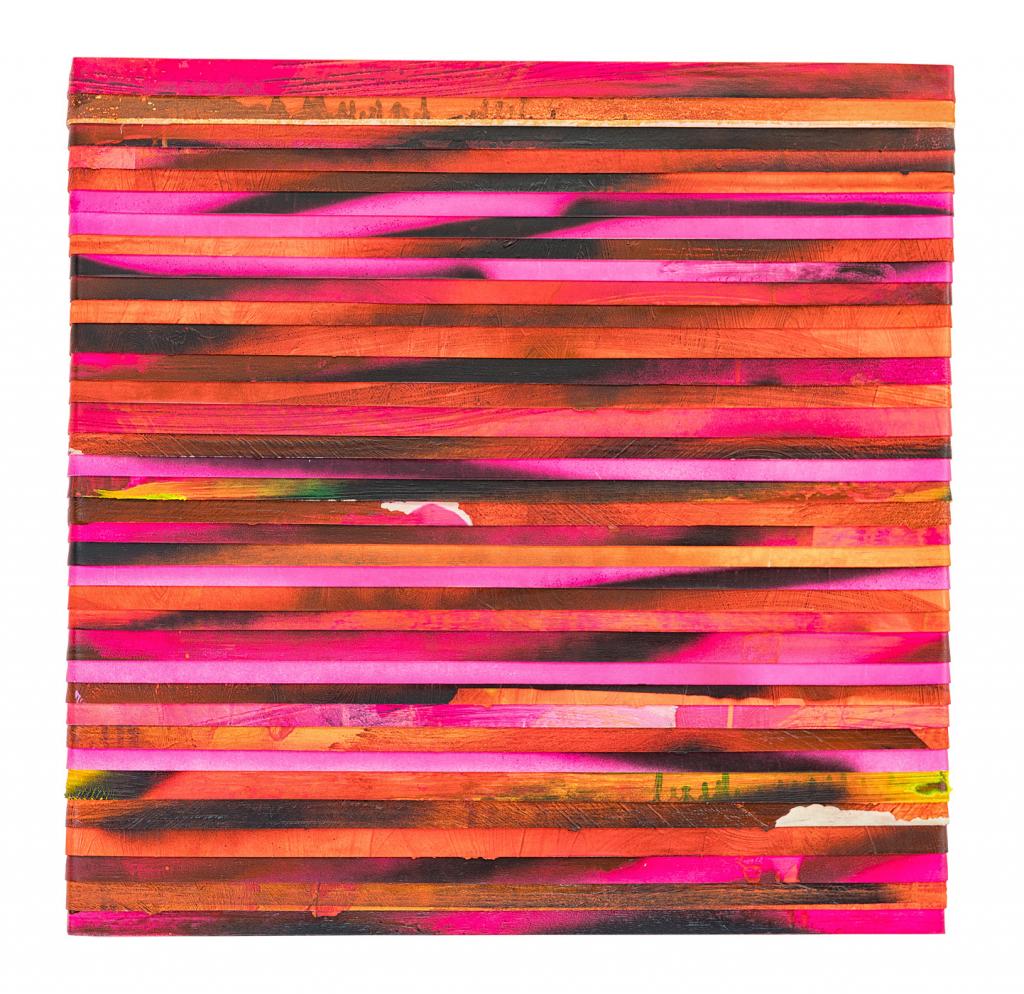 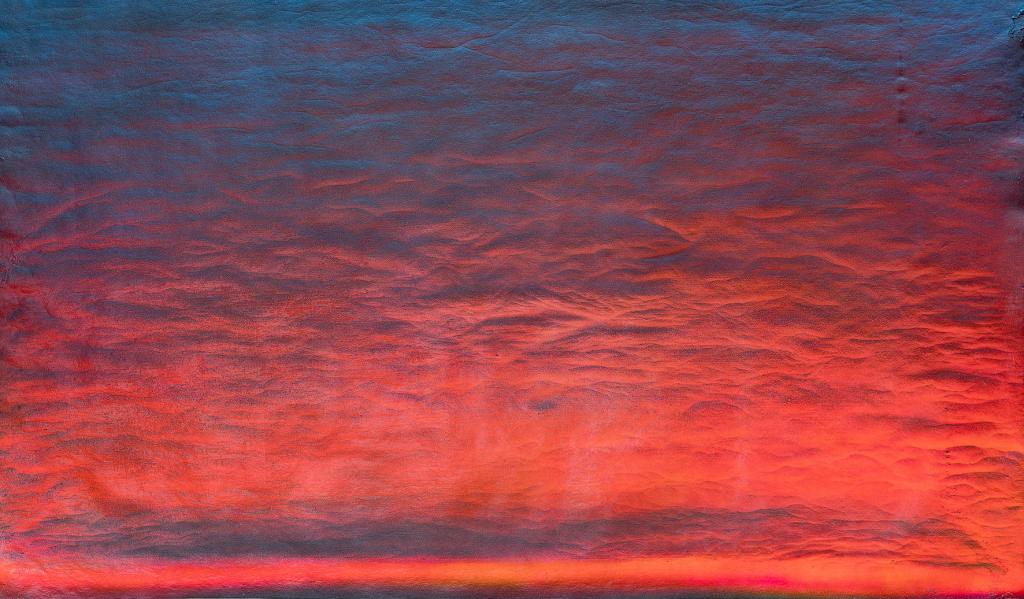 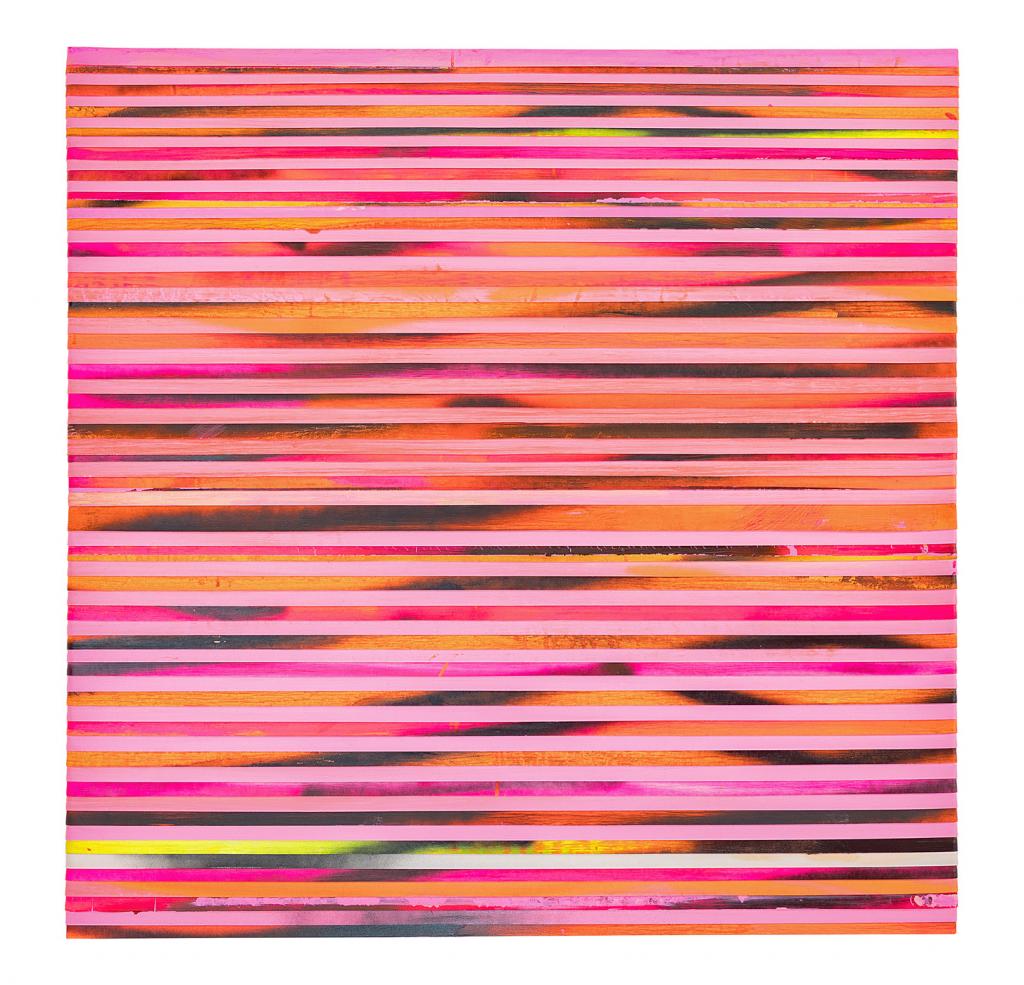 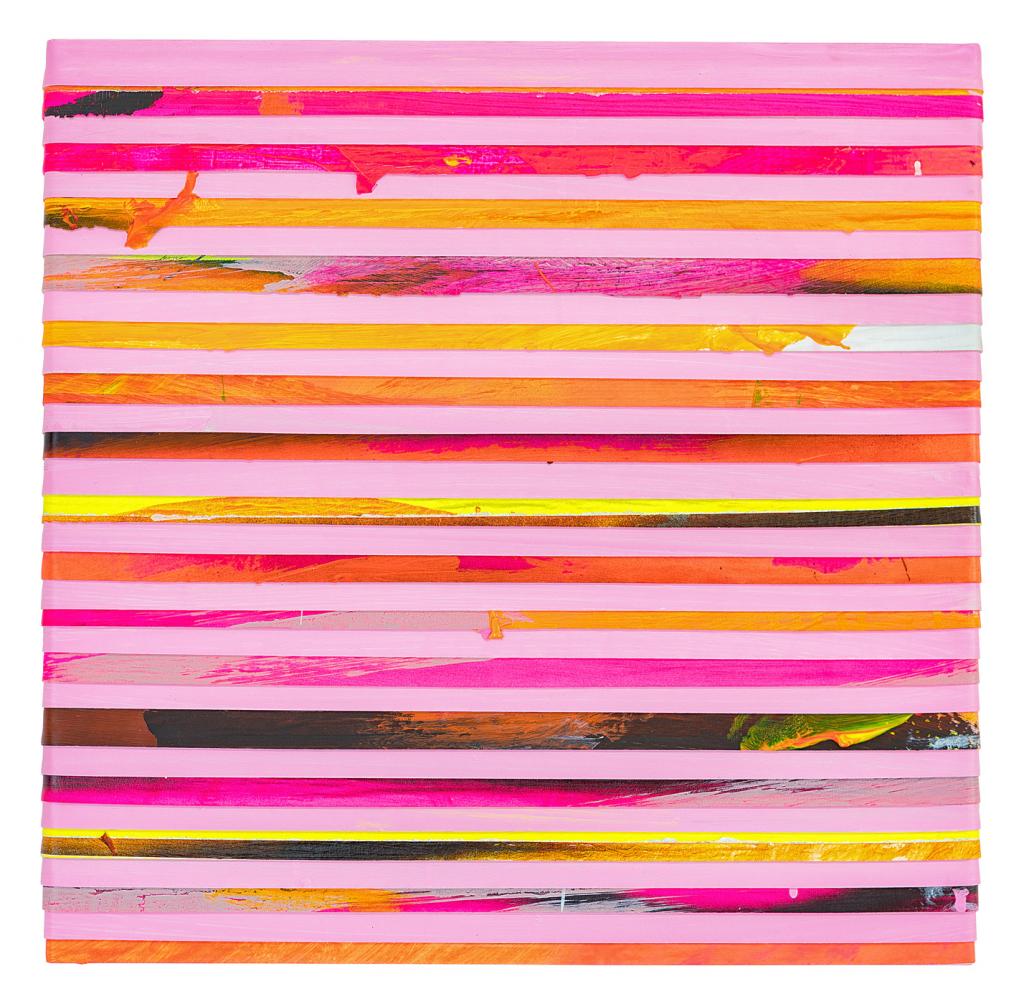 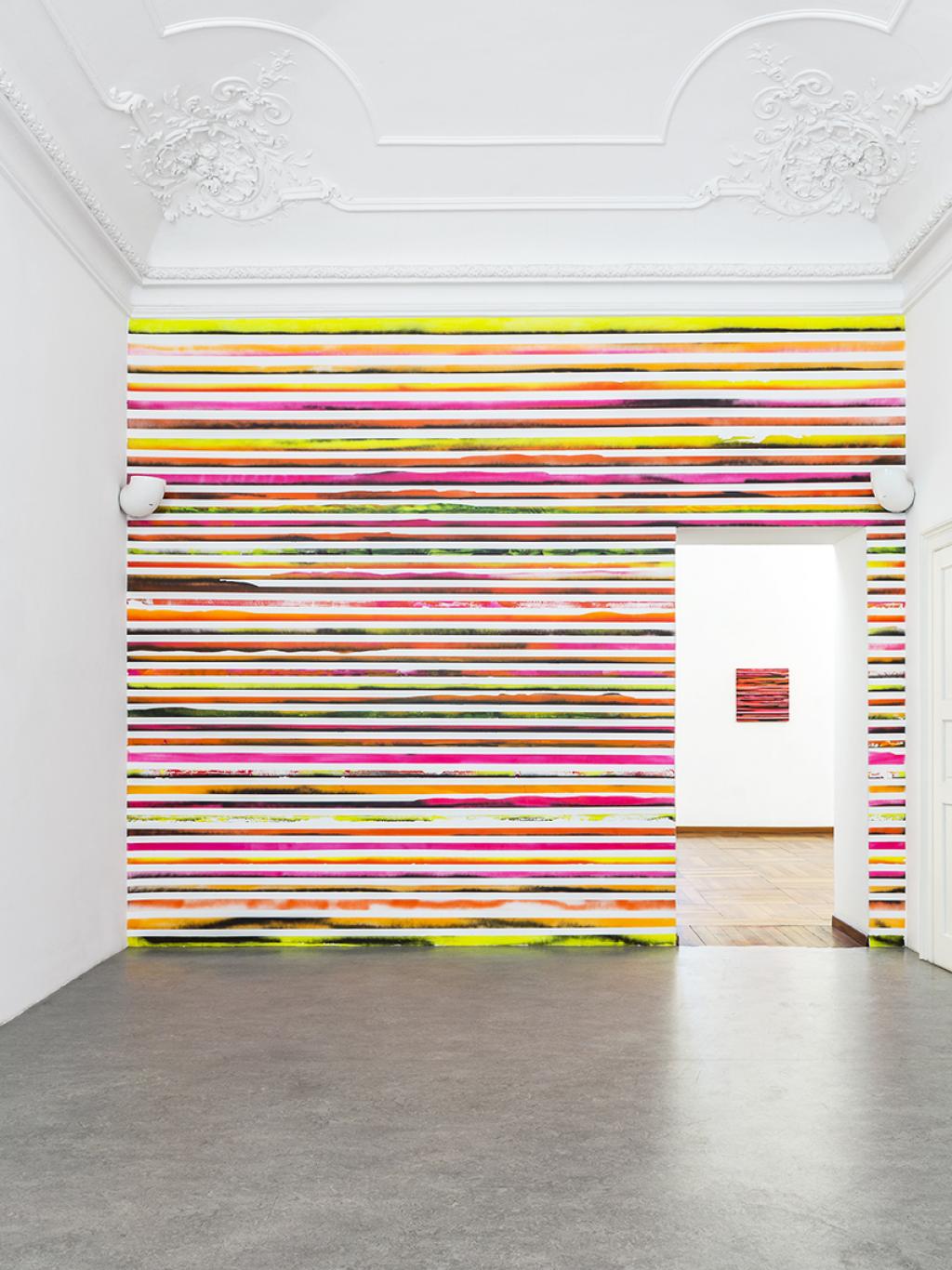 On display are a dozen new works, the result of his latest phase of research, designed specifically for the spaces of the Turin gallery, where Bini offers his new insights into the modes of contemporary representation of the landscape. Expanding the narrative horizon of his investigation, he now views the landscape not solely as a physical place, but also an interior, more intimate and hidden space, with which to establish profound connections.

Emotional scenarios is therefore cast in the form of an open dialogue between two apparently distant but intimately connected types of work. The first are the so-called "tapes" - works of a more abstract nature which has characterized Bini's peculiar language in recent years – where, by means of tape paper, the artist fragments and de-fragments the image which then re-emerges through the horizontal or vertical lines of the painting and evokes the actual landscape, while simultaneously recalling a digital image which re-awakens its emotional force. The second type of works are the “skies”, vibrant chromatic surfaces with intense colours, primordial and timeless visions that offer the observer an all-encompassing vision of colour, a space in which to plunge in order to find their most intimate selves. Having been previously exhibited on institutional occasions, and now on display for the first time in the Turin gallery, the "skies" are the result of a freer and more immediate painting technique that has accompanied the production of "tapes" since 2015, as an opportunity for reflection and a starting point for broader experiences. The new solo show takes stock of Bini's current research, which once again proves his urgency to explore all the possibilities of painting so as to constantly renew its expressive language, challenging materials and processes through an acute and precise investigation of the prime elements of painting - light and colour - which can find here a new synthesis, in the name of emotionality. Open-ended works, landscapes and emotional scenarios, places of the self capable of opening new spaces and windows on the world that will engage in a dialogue with a large wall painting made by the artist on a wall of the gallery, as an opportunity to work in situ to contend with the architectural space and recreate precious chromatic assonances.

The exhibition marks an important stage in the career of Paolo Bini, who returns to the Peola Simondi gallery - with which he has been collaborating since 2017 - after years of important public exhibitions and international awards such as the XVII Premio Cairo (2016) and, in the same year, the Left Behind solo exhibition at the Reggia di Caserta, followed by Mediterraneo rosso e oro at the Museo Riso, Palermo (2018), the admittance to the Intesa Sanpaolo Collections following the exhibition Paolo Bini. Immense spaces (2019), and, finally, the recent award in the Un triclinio per Nettuno competition, for the construction of a permanent work for the Archaeological Park of Paestum (2021).

He graduated from the Academy of Fine Arts in Naples. His works have been exhibited in national and international institutions, including CaMusAC Cassino (2020), ISCP, New York (2019), Gallerie d'Italia, Milan, (2019), Museo Riso, Palermo (2018), Museo MADRE, Napoli (2017), Reggia di Caserta (2016), Palazzo Reale, Milan (2016), Casa Ariosto, Ferrara (2014), Provenance House, Cape Town (2013), Museum of Religious Art, Iglesia de San Francisco de Asís, Havana (2010), Palazzo Bianco, Genova (2010). In 2016 he won the 17th edition of the Premio Cairo. In 2019 he gained admittance to the Intesa Sanpaolo Collections thanks to his solo exhibition Paolo Bini. Immense spaces, at the MiArt International Fair. Emotional scenarios is his second solo show at the Peola Simondi Gallery in Turin, after Painting, day after day, curated by Luca Beatrice (2018). In the spring of 2021 one of his works will be included in the contemporary art collection of the Archaeological Park of Paestum.