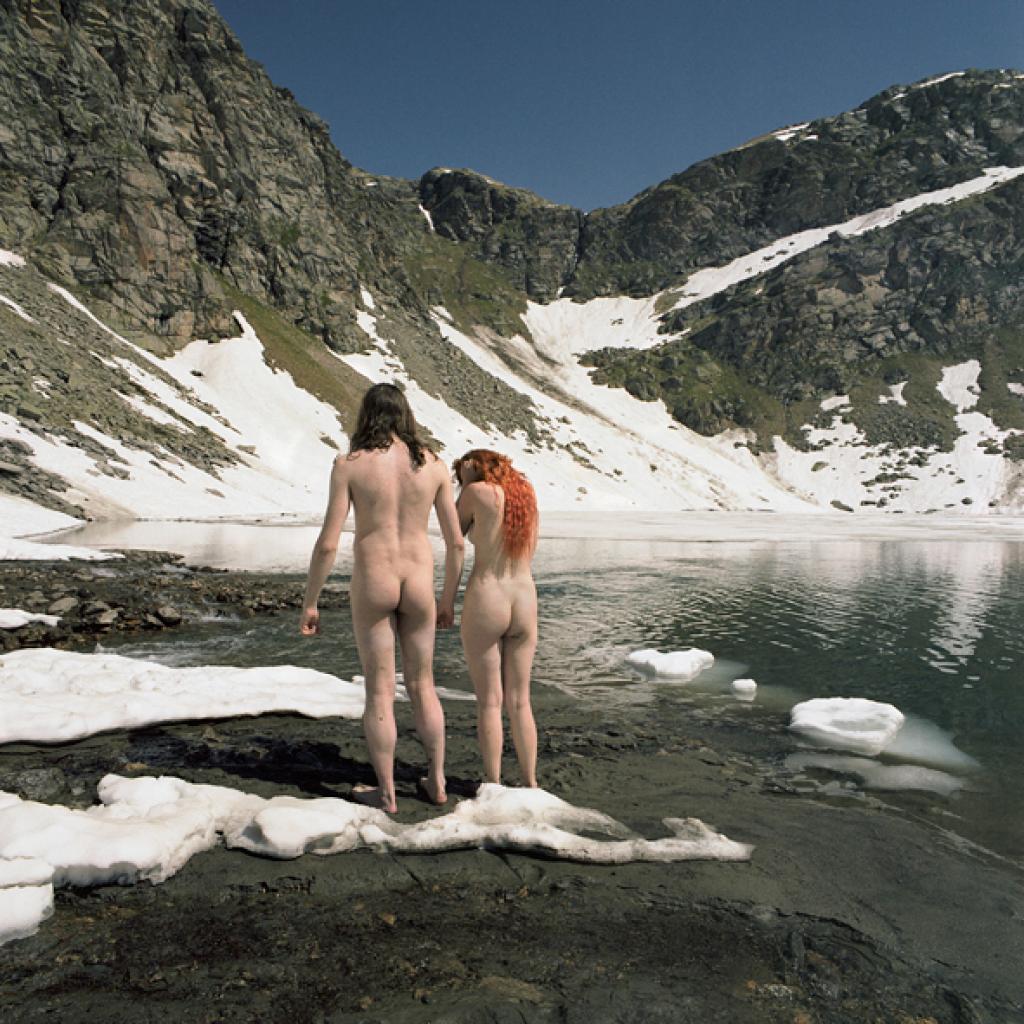 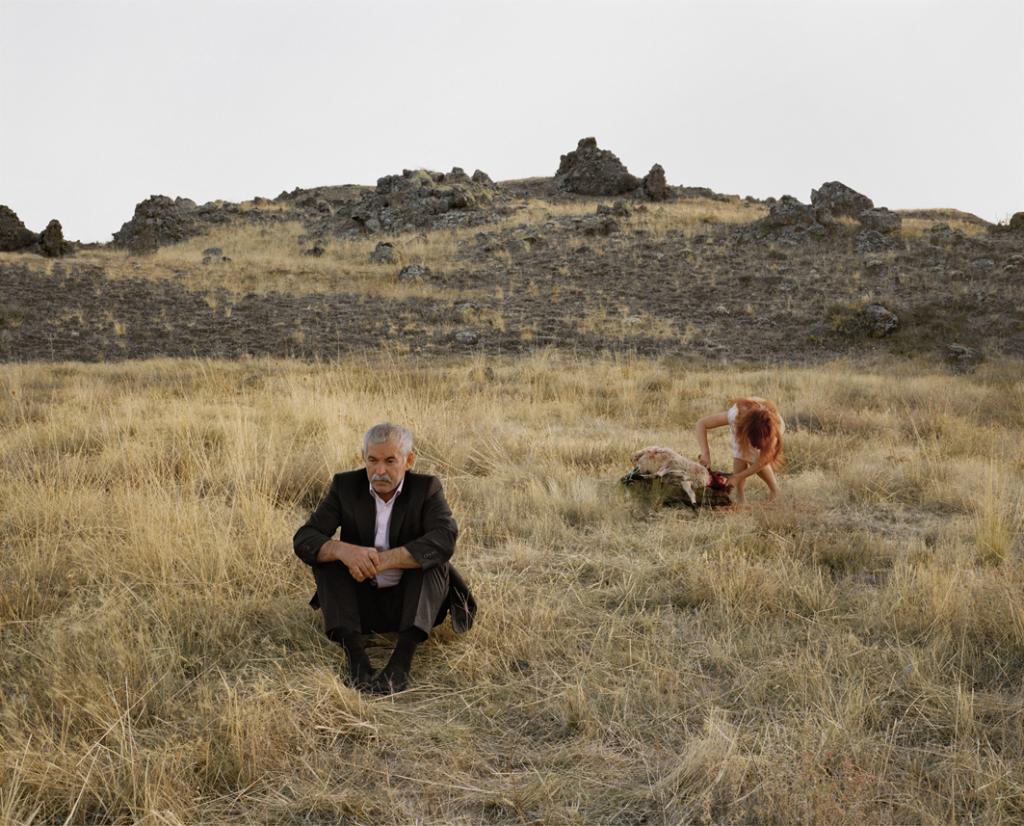 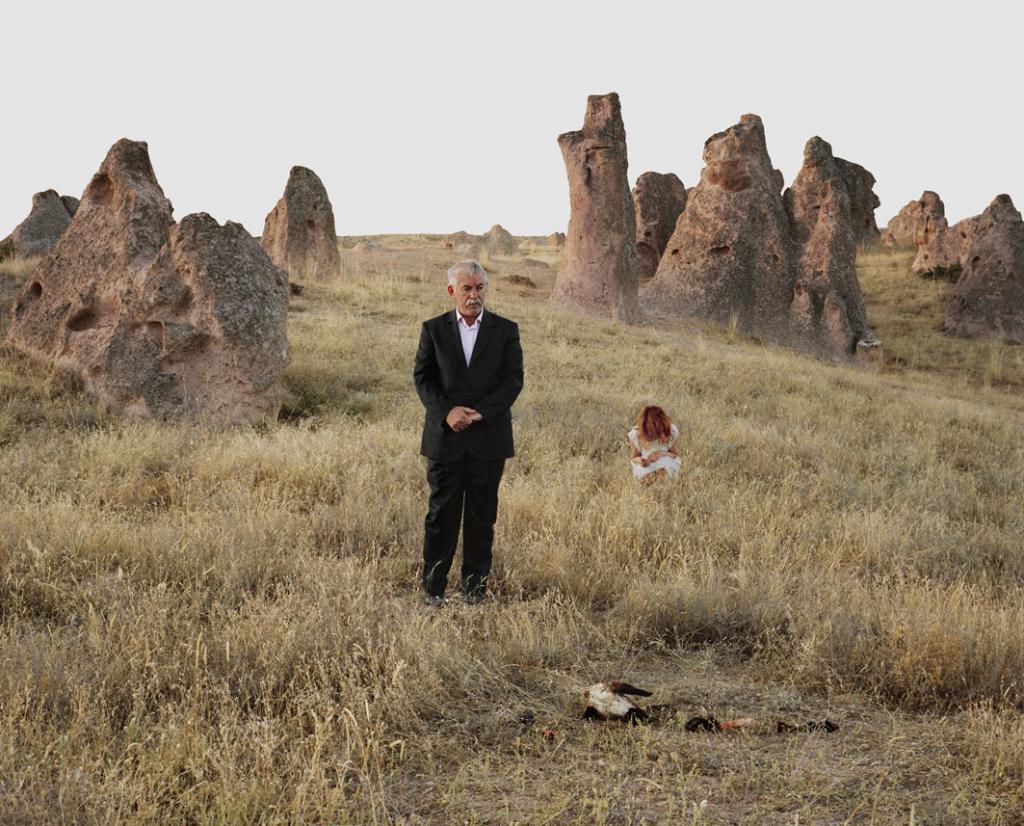 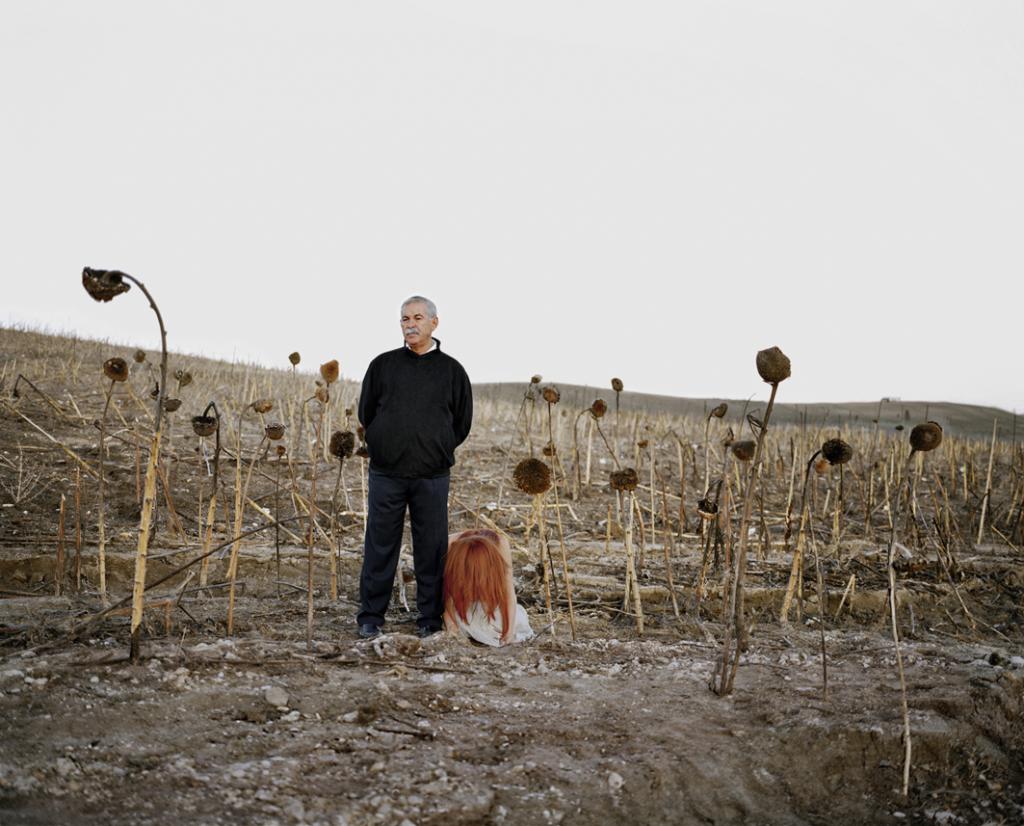 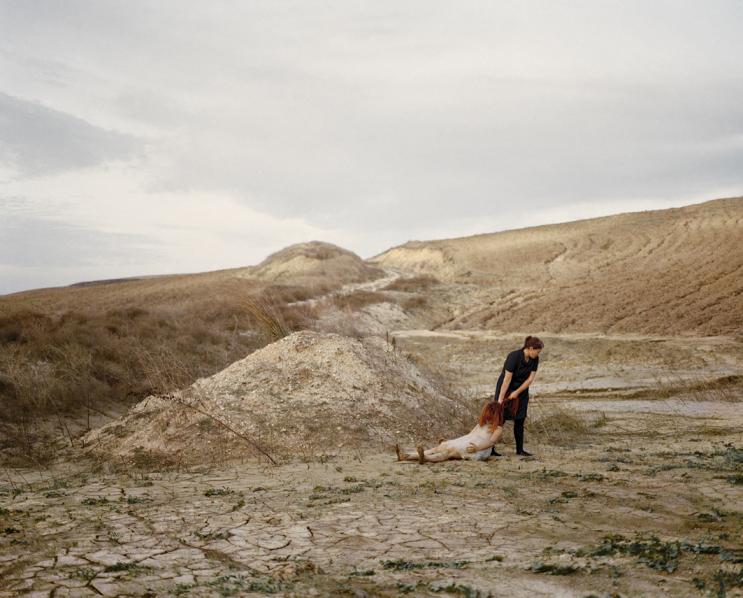 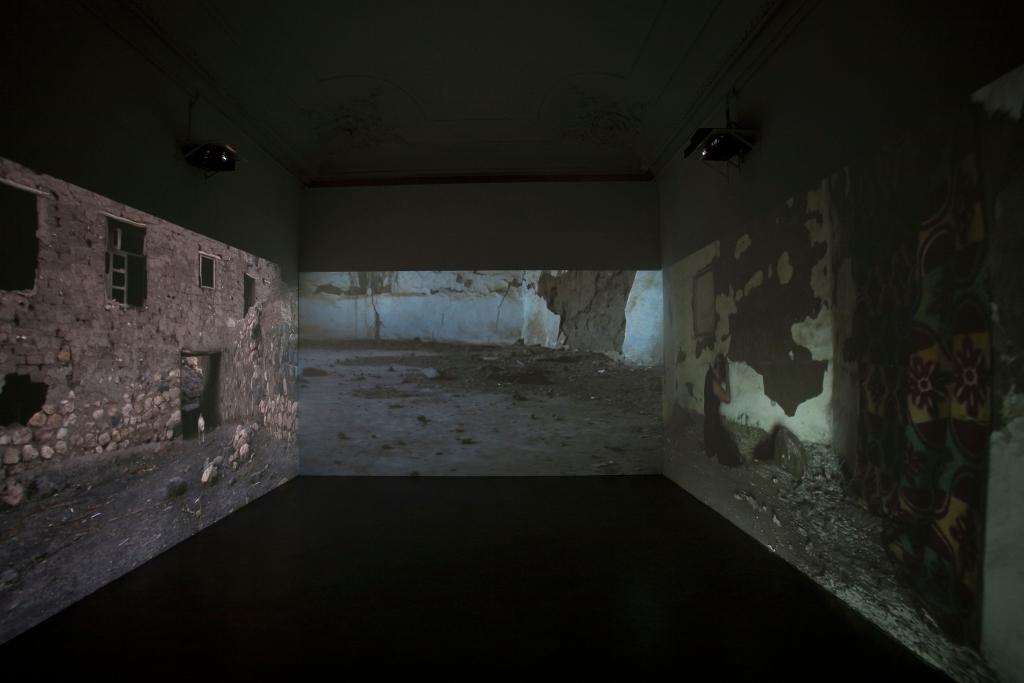 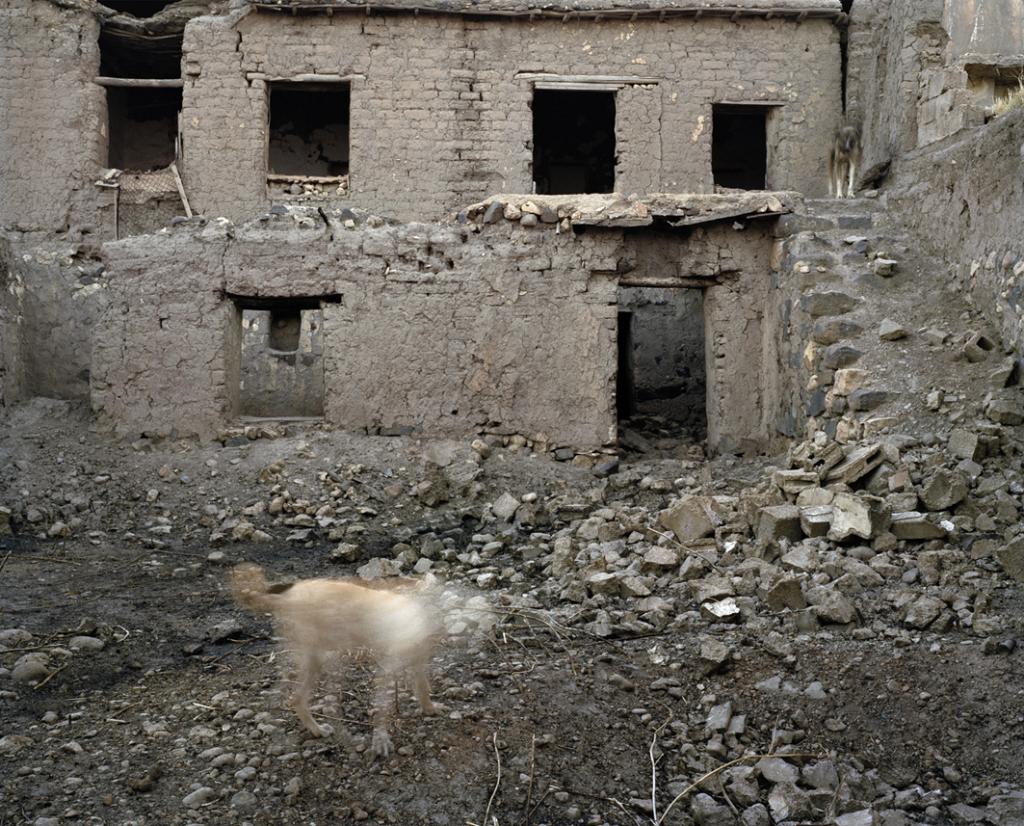 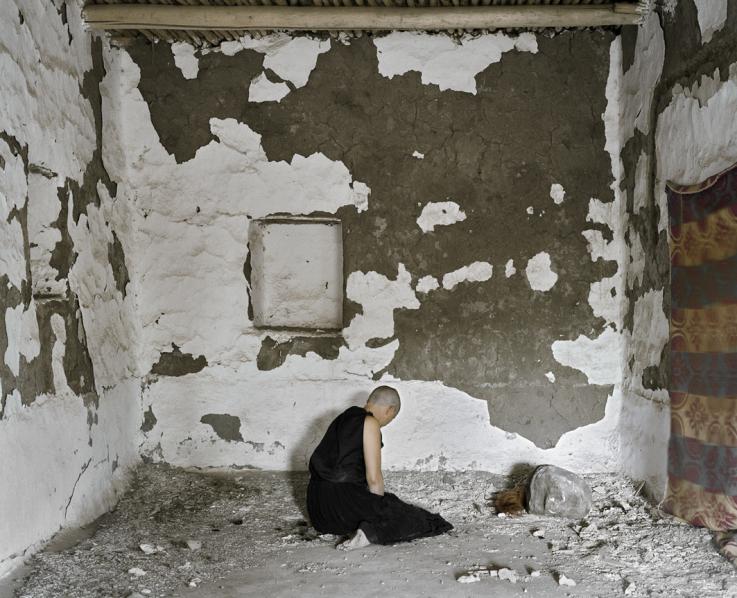 For many years Fatma Bucak (Iskenderun, Turkey, 1982) has been reinterpreting the great archetypes which belong to the origins and traditions of the Mediterranean. In her intense photographic and video work not only does she summon back to life their dramatic and narrative power in the first person, but she also causes them to intimately and subversively betray their origins so as to instil them with new possible meanings and interpretations.

Her work embraces performance, video and photography and, to a certain extent, also literature when we consider the titles of her pieces - often in Latin. The titles bring important references to classical and renaissance worlds to the fore, where they often collide with iconic force against the sometimes silent, sometimes monumental force of the images. For example, the classical resonance in Melancholia, the title of two series of photographs produced over several years, is today even more evident in Father and Esso (he), the titles of two recent pieces on show in this exhibition. To create them the artist returned to the scene of the crime, the empty, arid landscapes in eastern Anatolia where she was born, and where she staged a number of performances together with other individuals (men and, in one particular instance, a woman) who we recognise to be her father, mother and companion. Playing with images that have an extraordinary visual impact, the artist recreates and re-enacts the ancestral and “archaic” drama of a daughter’s relationship with the powerful, fearsome biblical and Koranic father figure. More generally, she also conjures up the mythical, Greek and Mediterranean father, and at the same time addresses a woman’s profane but also sacred relationship with man, represented by the heavy stone from the ruins. Once part of a church, the artists bears the weight of the stone on her shoulders, while the male figure, holding his hands, looks away and waits, his back turned to the scene.
The title of this piece, Esso, refers back to an old and little known film by Luis Buñuel, El, made in 1952. It was dedicated, not by chance, to the obsessive desire of the main character, a deranged and paranoid man, to posses and control ‘womanhood’. What for Buñuel develops from Freudian thinking and psychoanalysis, for Bucak has its roots in grand archetypes and, therefore, more radically in myth.

The combination of this small figure of a woman, with a bright red head of hair (herself), curled up at the feet of a stern-looking man dressed in black (her father) creates a powerful effect. Here they are surrounded by an empty landscape, a stony field of dried, lifeless sunflowers. The artist is wearing a white dress, her face covered by her hair - only the others have a face. She represents the guilty woman, the young woman, a scapegoat who has to bear the burden of responsibility for this sort of original sin that renews itself with every new generation as it shifts back and forth from East to West, without an identity, with only thick hair to hide and disappear behind. She is “all” women and, of course, “no one”.
These large, silent, indecipherable images are home to ancient Biblical and Koranic stories. But, as has already been said, they have altered, been changed, revisited and discussed so much so as to have compromised the original significance of the sites. Now it is the daughter who witnesses the bloody sacrifice of the lamb at the altar as her frowning father turns his back on the scene; she bears the weight of the holy stone before the man, and it is she who in sub specie allows her mother to drag her by the hair like a corpse in a wild pilgrimage across the cracked terrain of the steppes.

Fatma Bucak is one of the most original and courageous women artists to have emerged from the Mediterranean area. She is able to blend the peremptory presence of the sacred texts with the intensity of the classical Greek tradition and harness the energy of real experiences to the narrative biography of a young woman who has crossed many worlds on her way through life.
The video After a coup d’état when my father and his comrades were communist professors in Eastern Turkey also contains a strong autobiographical sense. In this piece the artist once again returns to earlier events. Plunging head first into the past she zooms in on the remains of a dilapidated house in an equally run down village that has been deserted by all its inhabitants except for a single dog. The dog is an ambiguous creature: in the West it is man’s affectionate “best friend”; in Islam it is considered impure and contemptible. What does its presence mean in that place that bears the slightly sinister scars of devastation? Kneeling among the ruins the young artist slowly begins to cut her hair while the seemingly restless spirit of another camera explores one by one the disfigured rooms and the ravished surroundings, hovering close to the ground to remain invisible from the windows. This is an old trick widely used by people on the run, who learned to make themselves invisible in their own homes from people spying on them from outside.
Fatma Bucak doesn’t explain anything in this work, she is silent; she says nothing. But there is a father – not just a father, her actual father - persecution in a distant village, the gaping silence of the ruins, and the symbolic expiation of the strike. Is it really possible that someone speaks about these things nowadays? Is there anything of our times in work like this? Someone might consider them simply the legacy of a distant past. Of course, time does not flow at the same speed in all the different regions of the world, and in some places the hands of the clock even seem to be going in the other direction.

So, this work is not simply a “denouncement”: that would be too banal, to slight for Fatma Bucak. Her work never stands on one layer but on a series of strata, each of which stands for a possible level of meaning: there is the immense vitality of the archetype expressed in the “right” language and that precise form of concentration that rouses it from its ancient but light slumber. The archetype of this artist is firstly one of suffering in the first person, an immensely fragile “feminine”, but one who has nevertheless the strength to stir up many ghosts from different epochs until they sink again in front of our eyes and in our conscience.