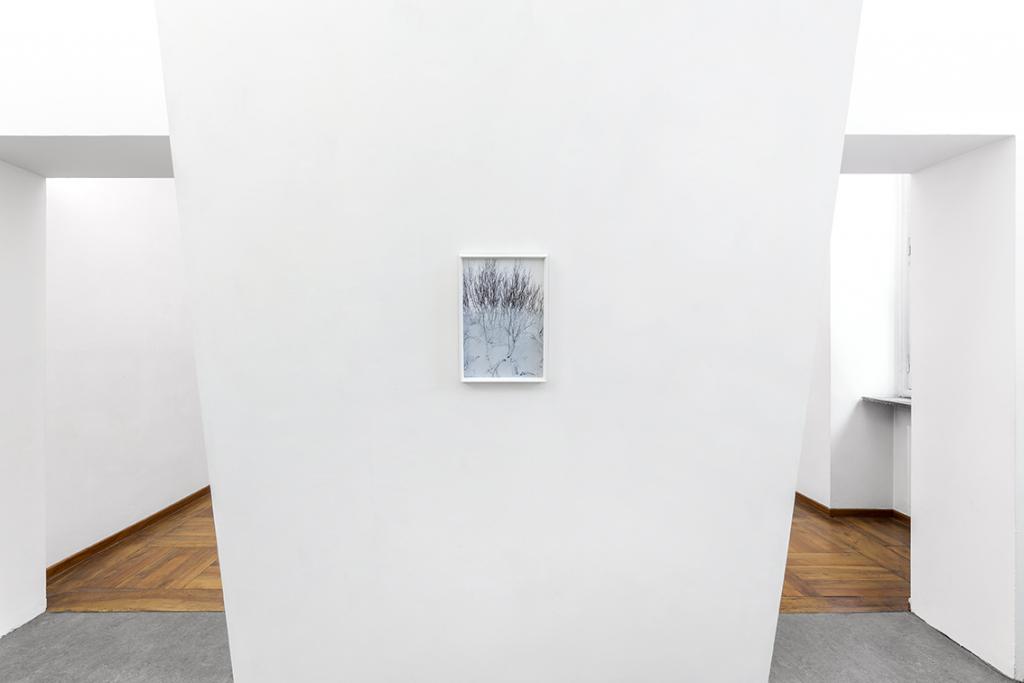 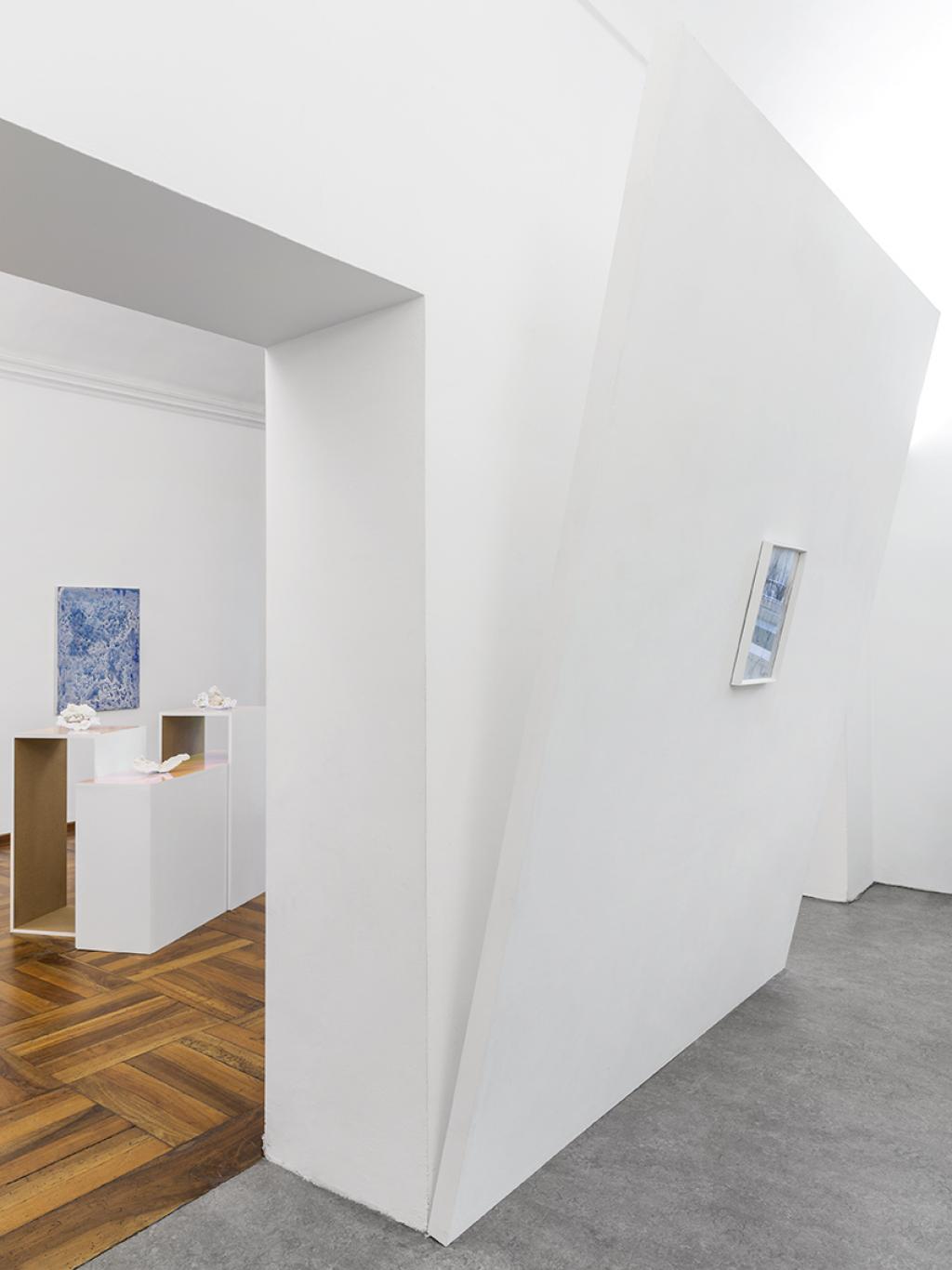 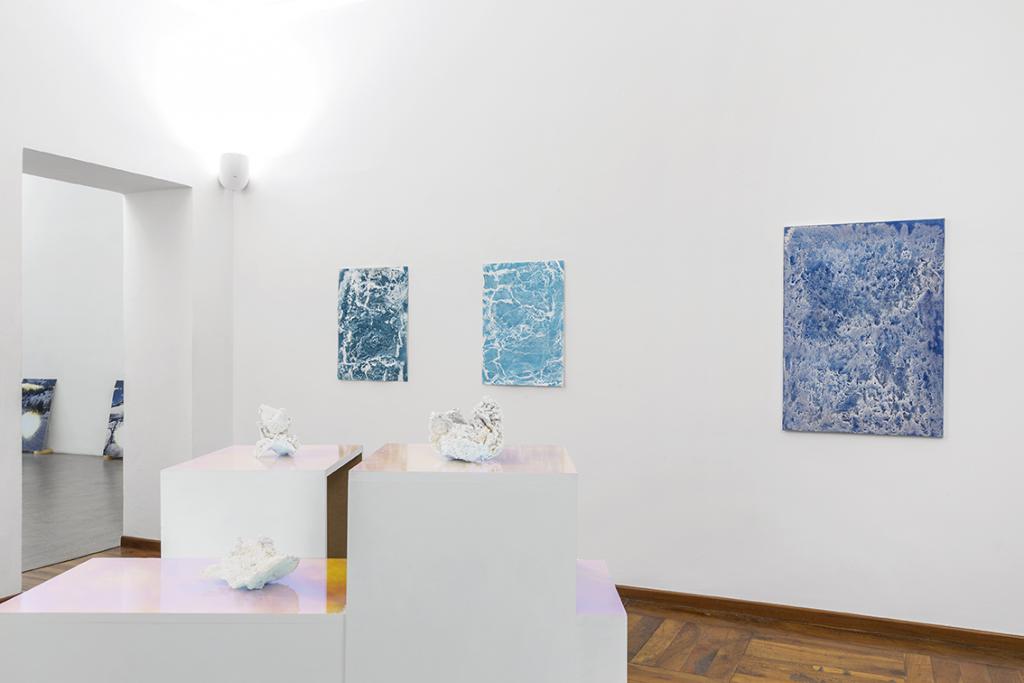 The invisibility of winter

The Alberto Peola gallery is pleased to host and present The invisibility of winter, Laura Pugno’s solo exhibition.

For the final truth about snowflakes is that they become more individual as they fall—that, buffeted by wind and time, they are translated, as if by magic, into ever more strange and complex patterns, until, at last, like us, they touch earth. Then, like us, they melt.
Adam Gopnick1

The familiar, iconic image of a snowflake was born at the end of the nineteenth century thanks to the photographic repertoire of over 5000 snow crystals captured by American photographer Wilson "Snowflake" Bentley. Just as the English photographer Eadweard Muybridge, captured the real motion of a running horse in 1878, the discovery of "reality" thanks to photography no longer allowed false steps in the representation of the world. But if Muybridge corrected errors in representation – horses no longer appear to have all four legs raised in unison except, perhaps, in children’s rocking horses – Bentley contributed, instead, to a further imaginative projection towards that natural phenomenon thanks to which the world silences itself to preserve intact the bud of future genesis. Bentley selected only the most complex and perfect snow crystals and established not only a specific narrative of snow – whether associated with Christmas or not – he also fostered the idea that the exclusivity of snowflakes was a reflection of the human soul. A century later, experiential uniqueness was added to genetic uniqueness when, in 1988, cloud scientist Nancy Knight discovered that «while it’s true that snowflakes often start out alike, it is their descent from the clouds into the world that makes them alter»2.

The formation of individuality in an increasingly accelerated free-fall suggests the egocentric separation of man from the rest of the world: an inevitable collision with the Anthropocene era, which though unavoidable could be mitigated thanks to an awareness that comes both from the younger generation stripped of its future and from the activity of artists whose bird's eye view gives us back a permeability of and into things, giving us the possibility to dissolve ourselves, melting into the ground rather than colliding with it in a clash without victors.

Laura Pugno is certainly one of these artists. Pugno – born in 1975 – makes her predominantly mountain landscapes, panoramic views and tactile gaze on the world the cornerstones of her artistic production. Her works are continuous invitations into the landscape, an analysis of encroachment between subject and object, an endless attempt to blur one’s view, in particular the one that places man at the center of the world and reveals its double falsehood, not only emotional-subjective but also cultural-western.

In a cycle of works titled Morphogenesis (one dedicated to Dürer in 2015 and the other to Mantegna in 2017), Pugno draws attention to a seemingly simple issue, namely the different stylistic approaches in the pictorial representation of the landscape, which contains a critique that is much more profound and difficult to accept for those who studied the history of Italian art, namely the complete falseness of those views which were based on mathematical and objective notions.

But today we are in free fall and perspectives on the world have multiplied, becoming overlapping and vertical, as Hito Steyerl explains in an important 2011 article published in "e-flux journal". What was perhaps not entirely clear at the time is the question of the control of our gaze. If today it is evident that we are constantly observed and directed by online technologies from above and in front of our screen-focused eyes, in the Renaissance and until the nineteenth century our dear linear perspective dominated the world with vanishing points defined as mathematical realities, giving us then as now the illusion of individual freedom. «The vanishing point gives the observer a body and a position. […]  While empowering the subject by placing it at the center of vision, linear perspective also undermines the viewer’s individuality by subjecting it to supposedly objective laws of representation»3. It is here, then, that Pugno decides to intervene directly on her photographic representations of landscapes by abrading with sandpaper those boundaries that are now too distinct, narrow, false and inappropriate (her series of works from 2012) or she becomes aware of her body in the natural context in works created in a very different en plein air from that of the nineteenth century. I am referring, for example, to Landscape Behind You from 2011-2012 in which the artist went to high altitudes to etch on plexiglass sheets the landscape that was mirrored there, not only by turning her back to the view but also by deliberately leaving a central void in the drawing – that of her body, a physical human presence that in this case corresponds to the absence of a portion of the landscape.

L’invisibilità dell’inverno (The invisibility of winter) is the meaningful title of two of Pugno’s exhibitions in 2019 (at SRISA Gallery in Florence, curated by Pietro Gaglianò, and at Alberto Peola’s gallery in Turin) but it is also the conceptual framework that contains a season of her production in which her passion for mountains and winter and the analysis of climate change caused by man become urgent and more direct. Trying to give shape and color to something as ephemeral as snow, it pursues an instinct for the preservation in memory of something that is not only fleeting because it is seasonal but risks disappearing forever. The works exhibited at Peola have all required the artist to be in situ, in the snow, because «the aesthetic appreciation of nature, at the level of forests and landscapes, requires unconditional participation, immersion and struggle»4.

In Moto per luogo (Moving through the place), the idea of abrasion returns, but this time it is caused by Pugno’s body itself: after having photographed several places in Piedmont and printed the images on large aluminium sheets, the artist returns to the same places and abrades each photograph by using it as a snow sled, calling to mind the nineteenth-century British winter sports boom in the Swiss Alps.

The series of white sculptures resting on an iridescent base titled A futura memoria (For future reference) combine the artificiality of jesmonite (a water-based acrylic composite) with the truthfulness and invisibility of snow. What the sculptures show is the inner part of the snow which is exposed to view and above all to the touch as an archival remnant for the future, with an ambitious attempt to turn it into a substantial repertoire, like Bentley’s, to whom Pugno dedicates another series of works on display, partly created at her last residence in Lithuania, at Nida Art Colony. In Omaggio a Wilson Bentley (Tribute to Wilson Bentley) there is even a direct reference to the photographic process; in order to imprint the image of snow on paper or on canvas, Pugno had to wait for the snow she had colored to melt naturally (white on brown paper or blue on white canvas).

In her frequent excursions at high altitudes like in her long periods of residences in the North, Pugno seems to have very much in mind the crucial role that the horizon line has played for centuries in our sense of orientation, as in our conception of time and space. The stability of the horizon line «hinges on the stability of an observer, who is thought to be located on a ground of sorts, a shoreline, a boat – a ground that can be imagined as stable, even if in fact it is not»5.

What happens, then, if the artist chooses to make the viewer aware of his non-centrality, of his total precariousness, by forcing him to look at a photograph of a horizon in which snow and sky merge, placed on a wall inclined at 23 degrees like the earth’s axis?
Hopefully there is an immediate awareness – because it is physical – that everything depends on that delicate inclination.