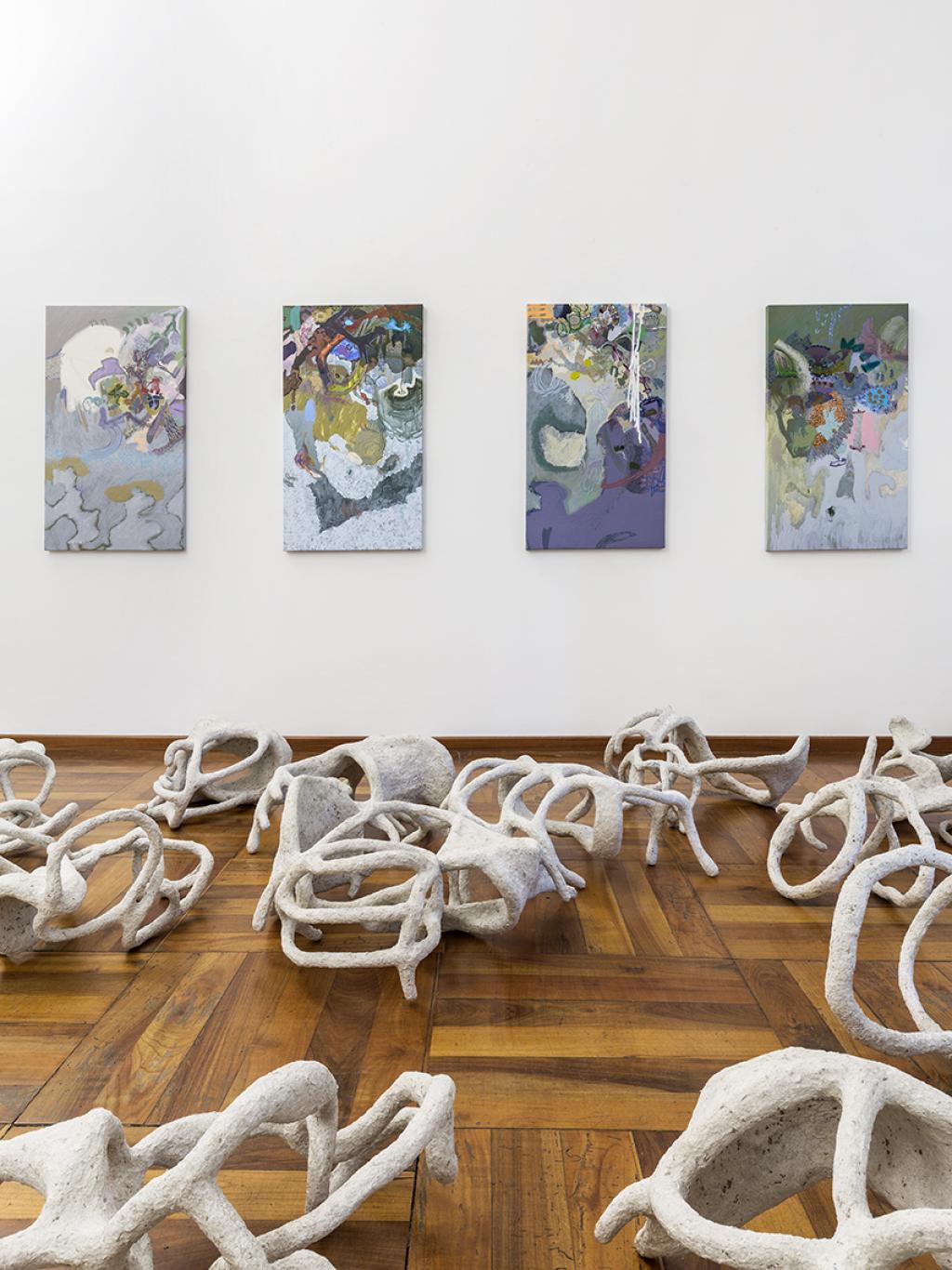 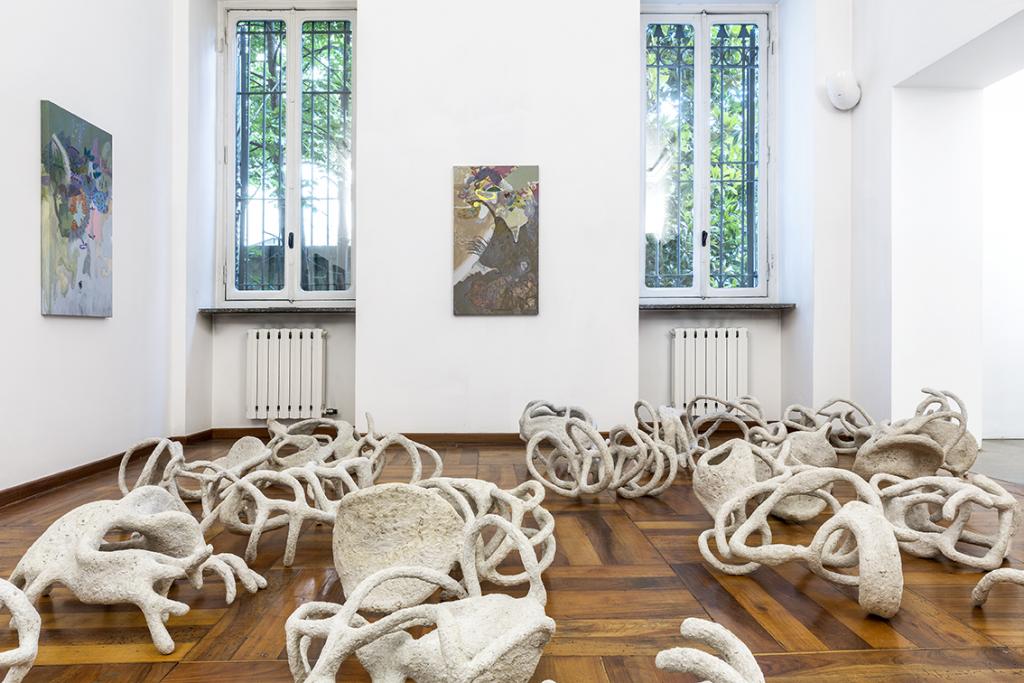 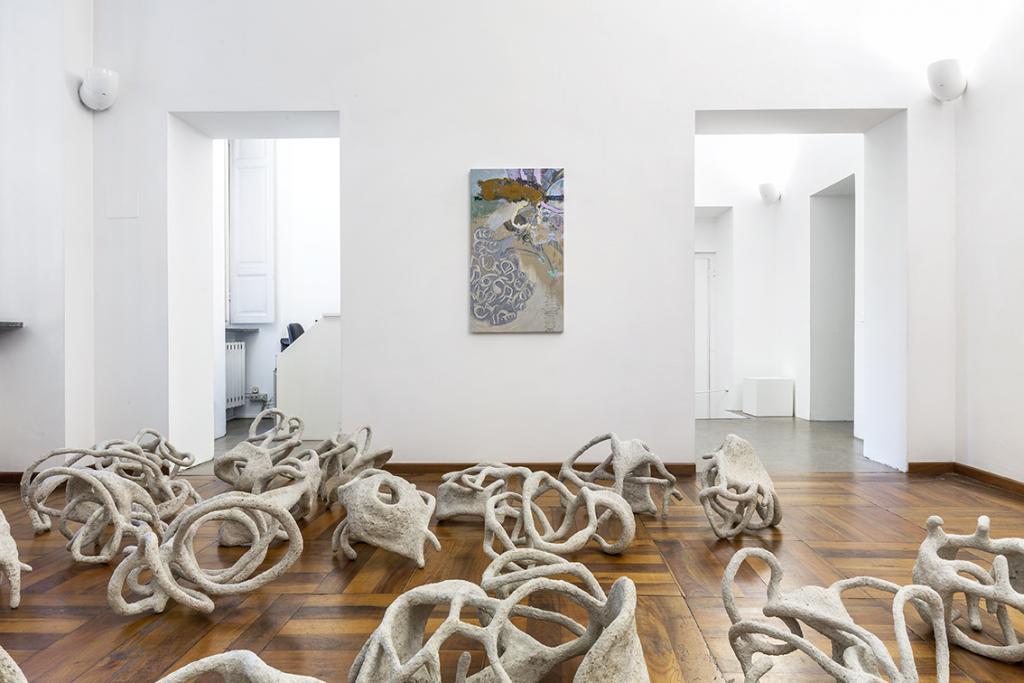 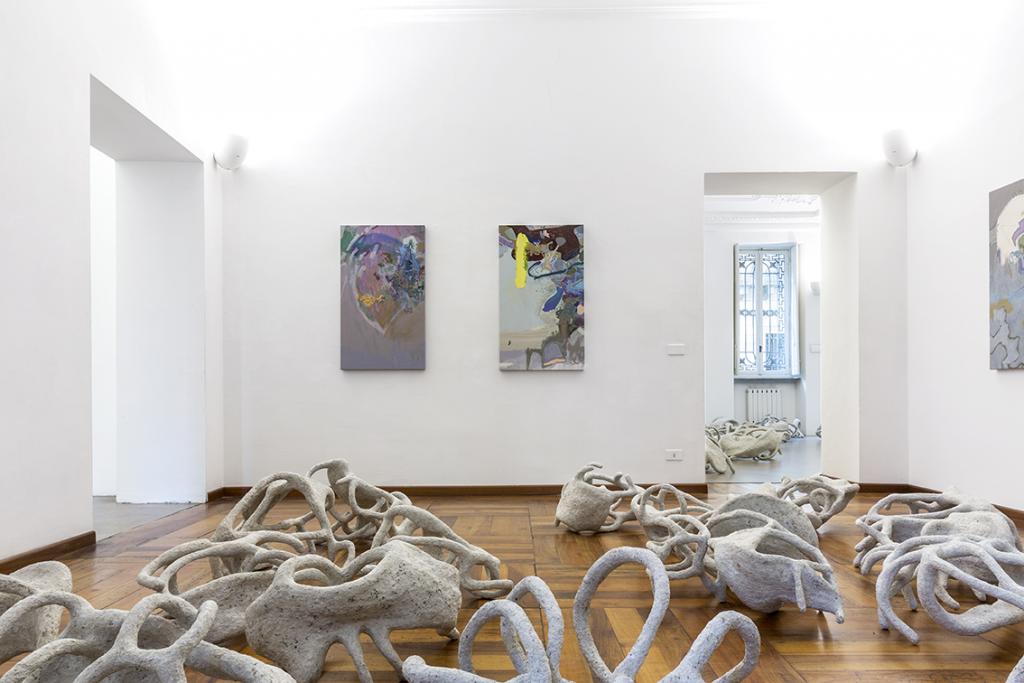 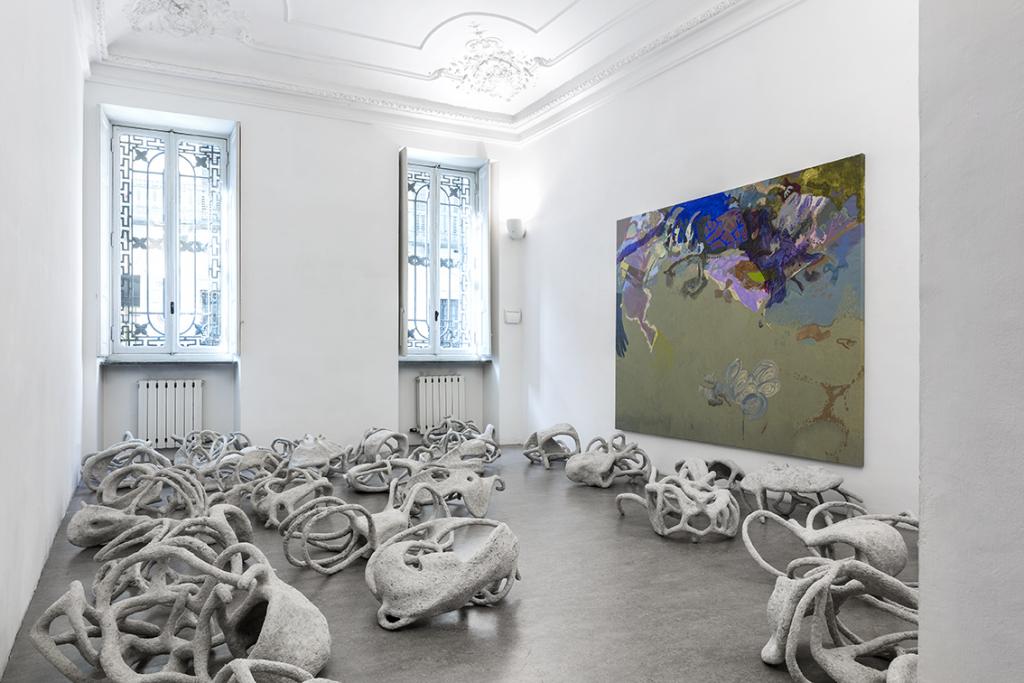 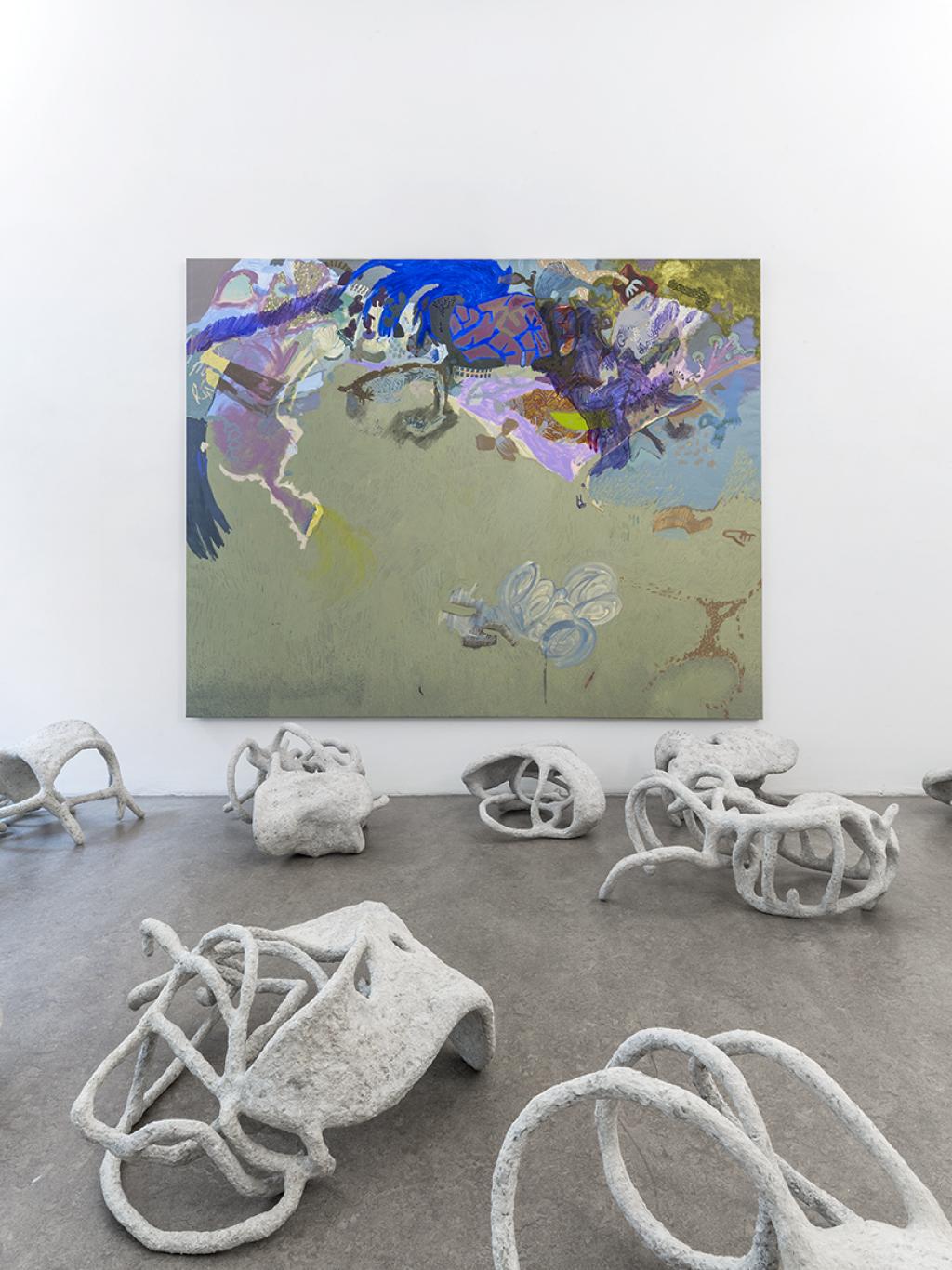 Imagine for a moment being far away from your country and your most intimate memories. Which and how many colours would you choose to paint the internalized image of that place, that memory? With how much passion, delicacy or instinct would your brush approach the canvas?

Victoria Stoian uses all the colours, in their changeable and multiple nuances. Only rarely does she use black, which for her stands for tranquillity, night, silence, as well as lifelessness. Even the smallest speck of pigment on her canvases seems to possess a sound-like quality that appeals to the eye as well as to the mind. A veritable pictorial symphony – this is how Victoria Stoian describes her country, Moldavia.
Similarly to Tancredi’s The Hometown Diaries, Stoian makes use of a multi-layered, highly textured sign to narrate an abstract landscape deprived of a perspective construction. What gives depth to the canvas is the intensity with which the paint is applied. Delicate, tenuous lilac and sage-green crosshatches suddenly give way to a whirl of colour and matter. At first soft and delicate, the brush strokes become increasingly more abrupt and instinctive, thus revealing the artist’s emotional style.
Nistru-Confines is Victoria Stoian’s new series of works after which this exhibition is entitled. Once completed, it will consist of 400 works, both paintings and sculptures, representing each kilometre of the long border marked by the Nistru River that separates Moldavia from Transnistria, a secessionist region that self-proclaimed its independence in 1990. Thus, Stoian’s narrative is one of borders, war and abandonment. The ensuing condition of instability and the economic collapse of the country have resulted in a gradual but constant depopulation of Moldavia. This “forced exile,” which has especially affected the rural areas, has painfully driven many families away from their homes and lands.

Victoria Stoian personally experienced this separation. At twenty-one, she managed to reunite with her family who had been living in Turin for some time. In this city, she pursued her passion for art, and obtained a Master degree in History of Contemporary Art at the Accademia Albertina di Belle Arti in Turin, which will mark the beginning of her artistic and professional career.
Her work bears witness to the legacy of 20th century abstract expressionism, which Victoria reinvigorates, gaining a firm reputation in the contemporary art scene.
Over the last few years Victoria Stoian has worked on two pictorial cycles which foreshadow the series Nistru-Confines, which is partially on exhibition in this gallery. In Recea project (2014) the canvases illustrate a heat map of the seasons which, month after month, alter the acacia forest surrounding the Moldavian city Recea. In Codri Earthquake (2013/2017) the artist creates a sort of seismic map describing by the second the sense of chaos and instability caused by the 2011 earthquake, which severely damaged the Codri forests.

The research into and the narration of a specific geographic place, the serialized numbering of the works that makes it possible to track down a specific detail, the abstract re-elaboration of a memory – these are some among the most recurrent characteristics which feature in her latest works as well. However, compared to her previous works, Nistru-Confines seems more emotionally fraught, due to both the political innuendos and the presence of papier-mâché sculptures whose twisted shapes recall barbed wires, traces of bodies and barren shrubs.The arrangement of the sculptures in the gallery fosters a sense of disorientation; it has been so devised as to restrain and deform the concepts of space and time. The visitors are made to walk along a pre-established route that limits their freedom of movement and constraints them to follow the path in order to overcome the real, physical border that separates them from the canvases.
As we observe the paintings of Nistru-Confines, we become aware that the tension gathers at the top, while the brush strokes are lighter and more even at the bottom.This upward suspension and the contrast between full spaces and empty ones endow the entire cycle with a strong sense of instability.

As she looks me in the eye, Victoria says, in a seemingly calm tone, “My present is not separate from the past.” Likewise, in her canvases, scraps of memories mix with today’s experiences, creating a new suspended time. Abstract signs seem to hide traces of images. I catch a glimpse of human figure, a house. I seem to descry a tree, an animal. I figure Victoria in the act of painting – each canvas is a moment of total intimacy for her. Her brush is a means to confess her most profound feelings.