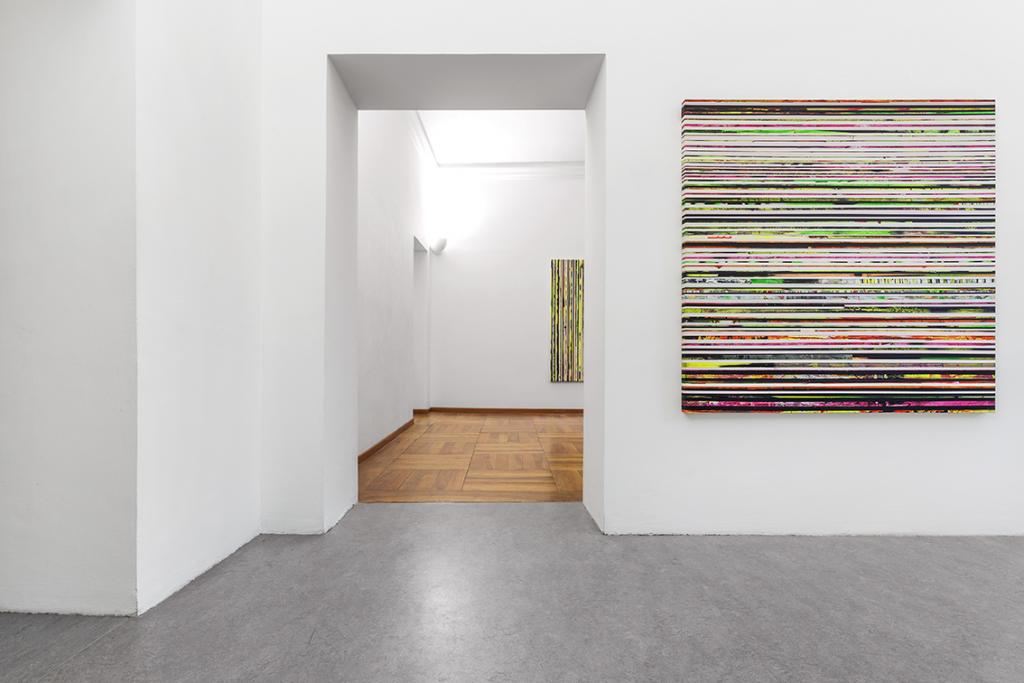 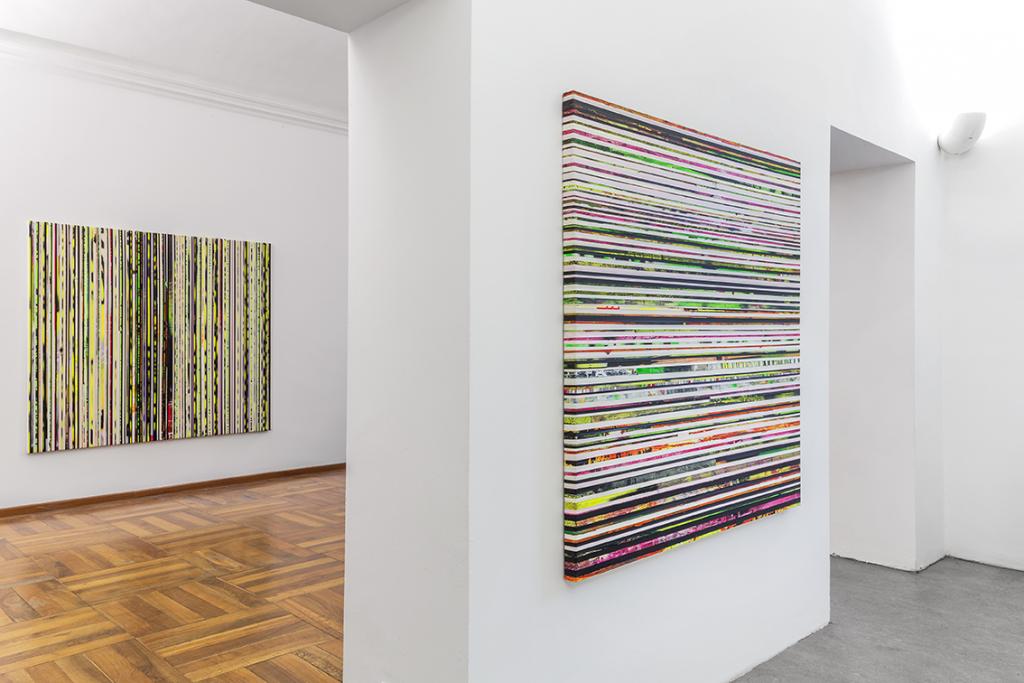 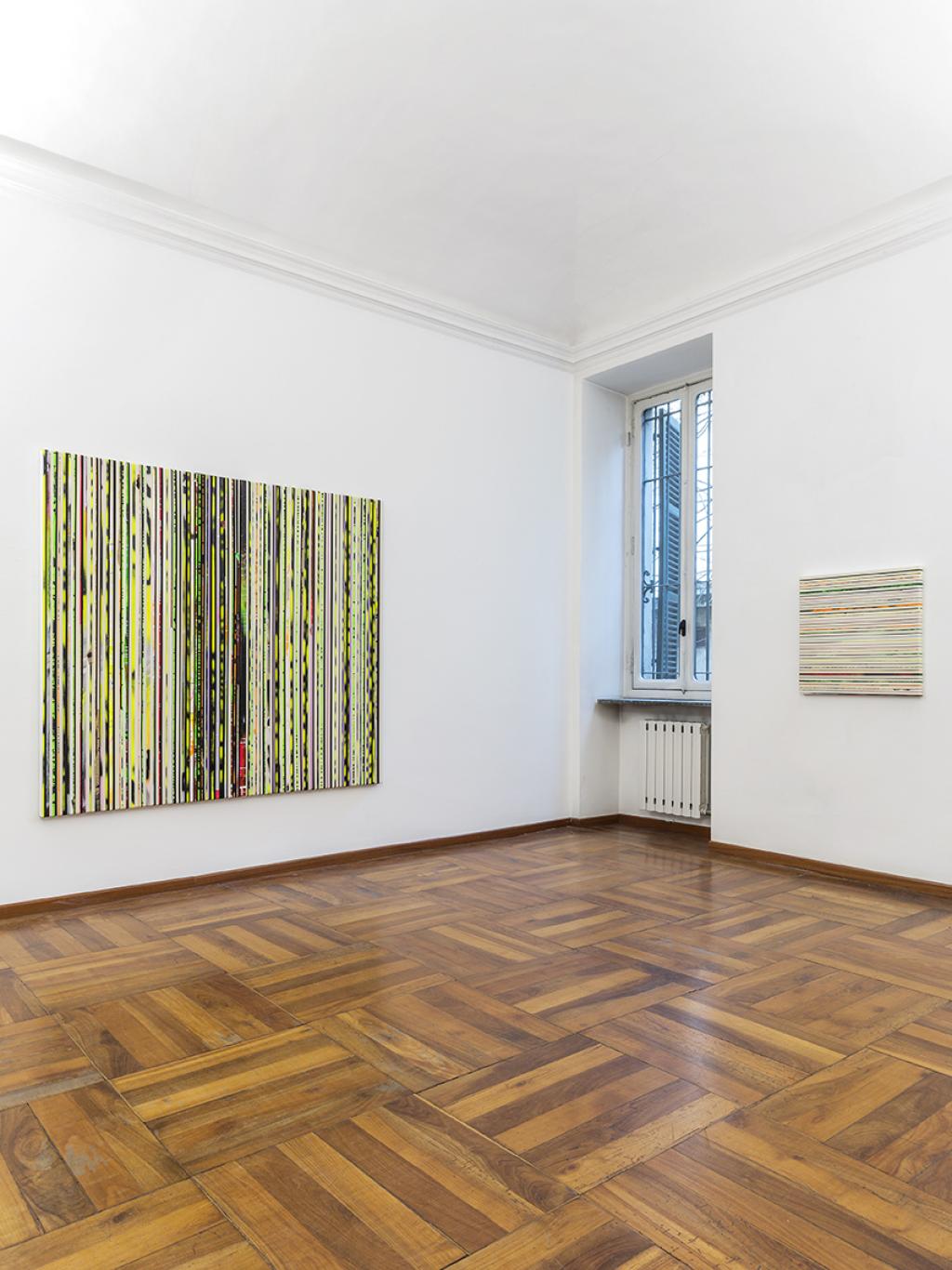 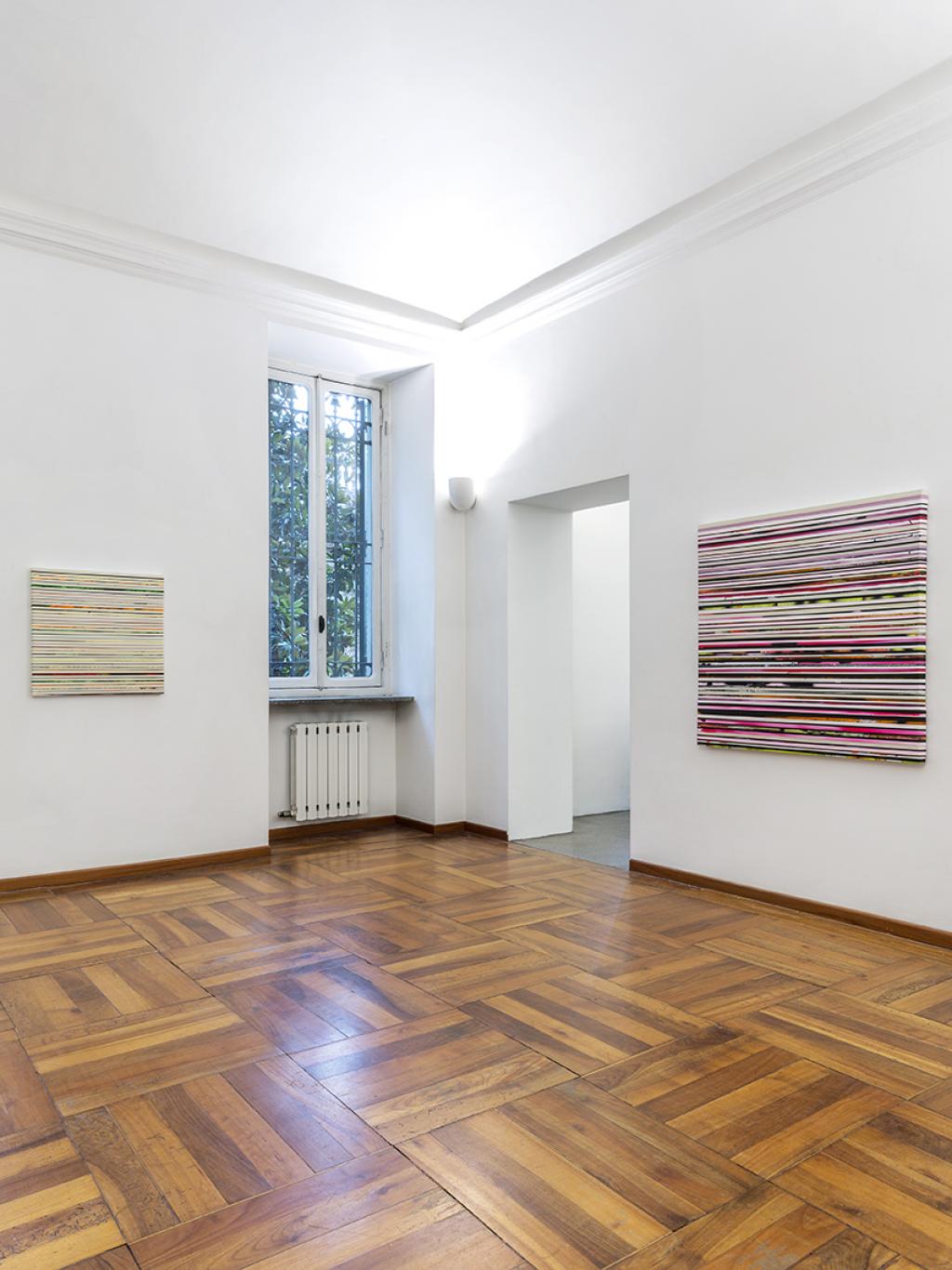 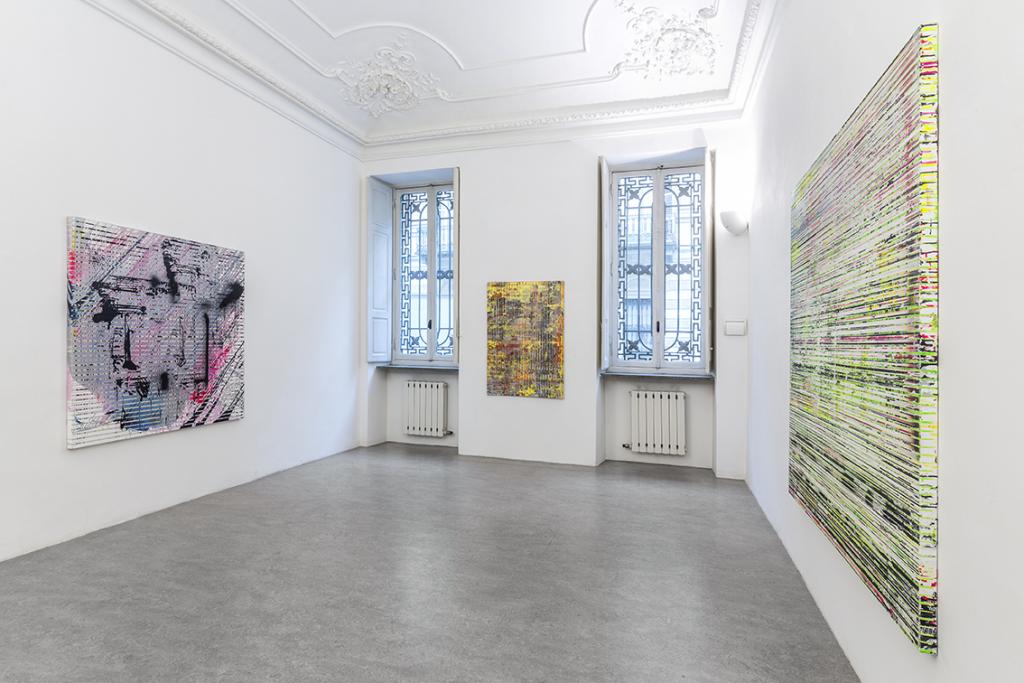 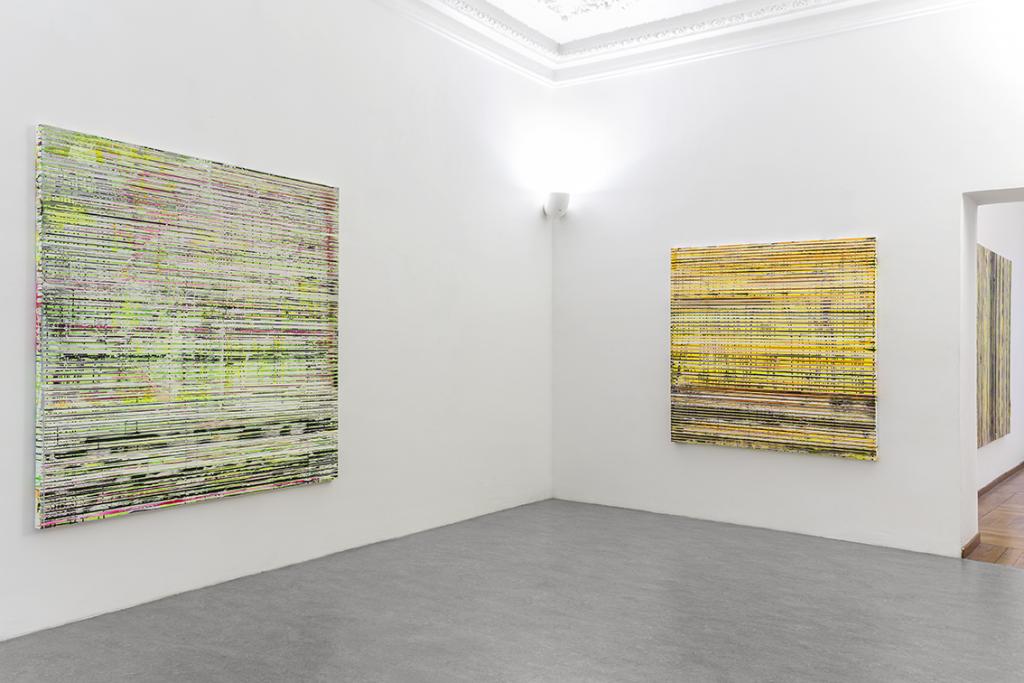 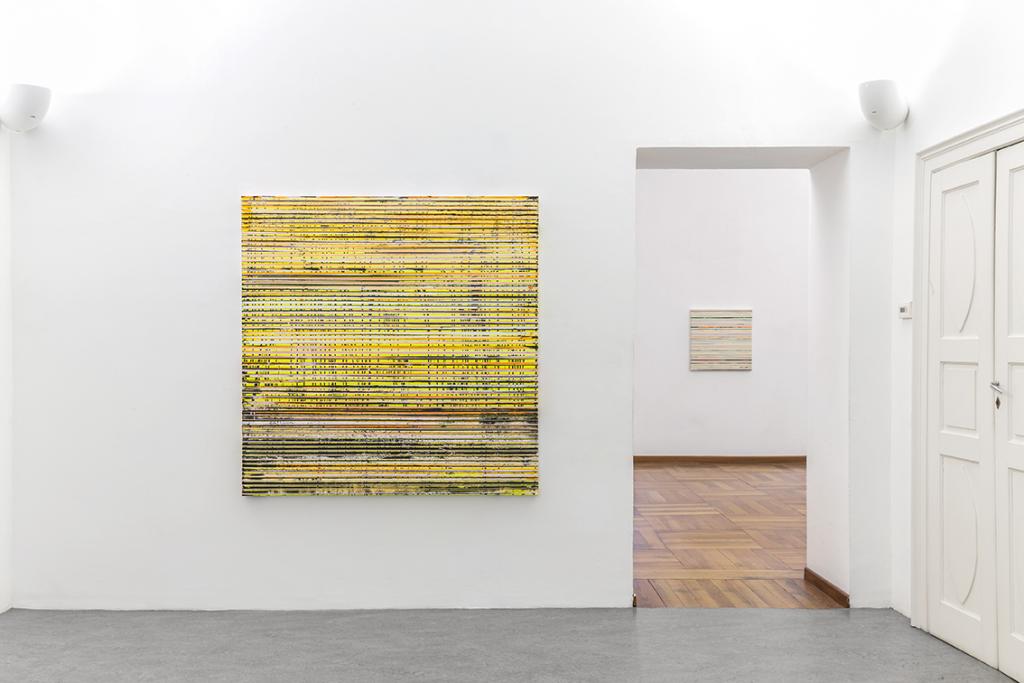 Before being a job or an art, painting is discipline. A daily need that requires careful thought, exercise, method – a practice that becomes a necessity. In contrast to other languages, painting can also exist without specific planning, as instinct and talent add up to thought and theory. The former cannot work without the latter, and only by putting them together can the artistic mechanism function. This explains the scarcity of genuinely interesting and brave painters.

In my conversations with Paolo Bini about this exhibition, we discussed its title at length. Having dismissed all the options in English, I decided to concentrate on the space the activity of painting has in his life: it’s his job, his passion, his curiosity, the challenge that he constantly poses to himself before anyone else. He discusses it, queries, seeks opinions – he gently and promptly updates you on his works in progress, voices his doubts, engages in conversations, listens, ponders. The result always comes as a surprise. Painting, day after day, is the existential condition of Paolo Bini, the outcome of his haunting investigation and his contagious and overwhelming humanity. The Life of P., we could say, to paraphrase the title of a great film.

Within the traditional categories of art history, Bini’s paintings would be described as ‘abstract’. However, these twentieth-century interpretive patterns have proved limiting. Paolo’s painting activity has confronted the ongoing change which involves a wide range of contaminations and hybridizations of languages. Today, painters can paradoxically do without painting altogether, and rely instead on technology, liquid images, unusual or undignified materials as well as the necessary filtering of conceptual art. Post-2000 painting is global science, completely outsourced, soft and fluid, web-compatible. Yet, in his case, it charms and seduces, because, no matter how you approach it, it never breaks away with the syntax of colour, the only rule which is impossible to disregard.

In the autumn of 2016, Paolo Bini received the Premio Cairo, the most important award for under-40 Italian artists. A few weeks later, his works were on display in the chambers of the Royal Palace in Caserta, a challenge he rose to thanks to an effective combination of energy and poise, proving to be unusually mature for a man of 34. He lives in Battipaglia, where he was born, and often travels to South Africa, his second homeland the other side of the world. A WhatsApp-addict, when he’s there he often sends me pictures of landscapes where light – another crucial item in the grammar of painting - constantly dominates. Seeking the light – downwind - controlling his instincts and transforming them into reason. He always manages it. He sends in titles for his works - warm, evocative titles - and he is the first person to marvel at his finished paintings.

It has been a month since we started working on this exhibition he is very keen on. “Be careful, Paolo,” I said, “this is my city – it’s stern and demanding – make me look good.” What’s the result? I feel satisfied, happy, and content. I never doubted I would.