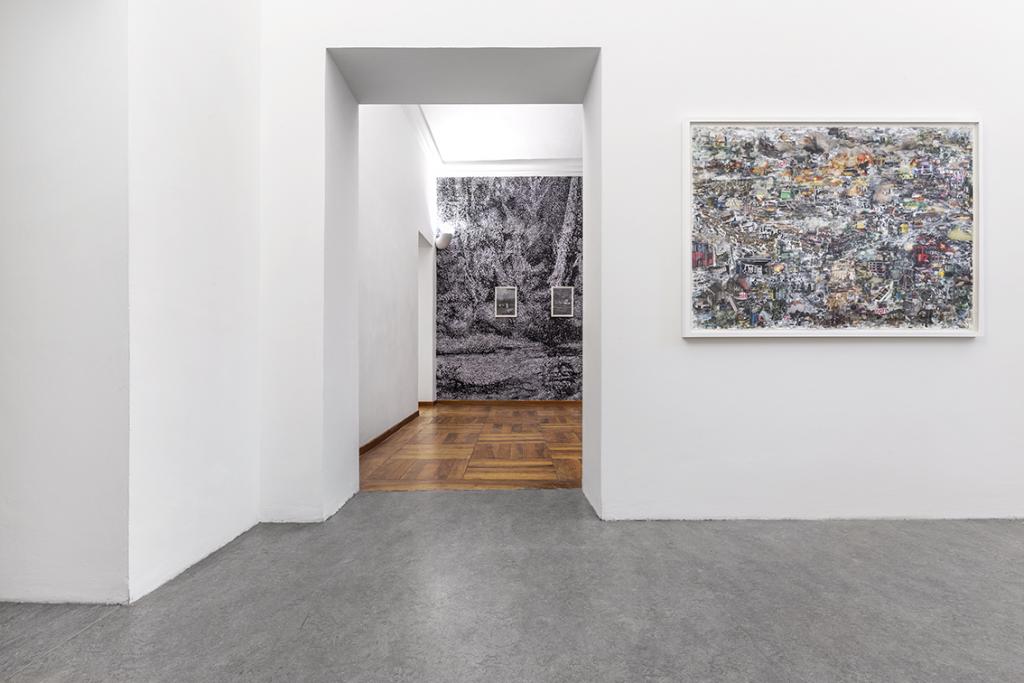 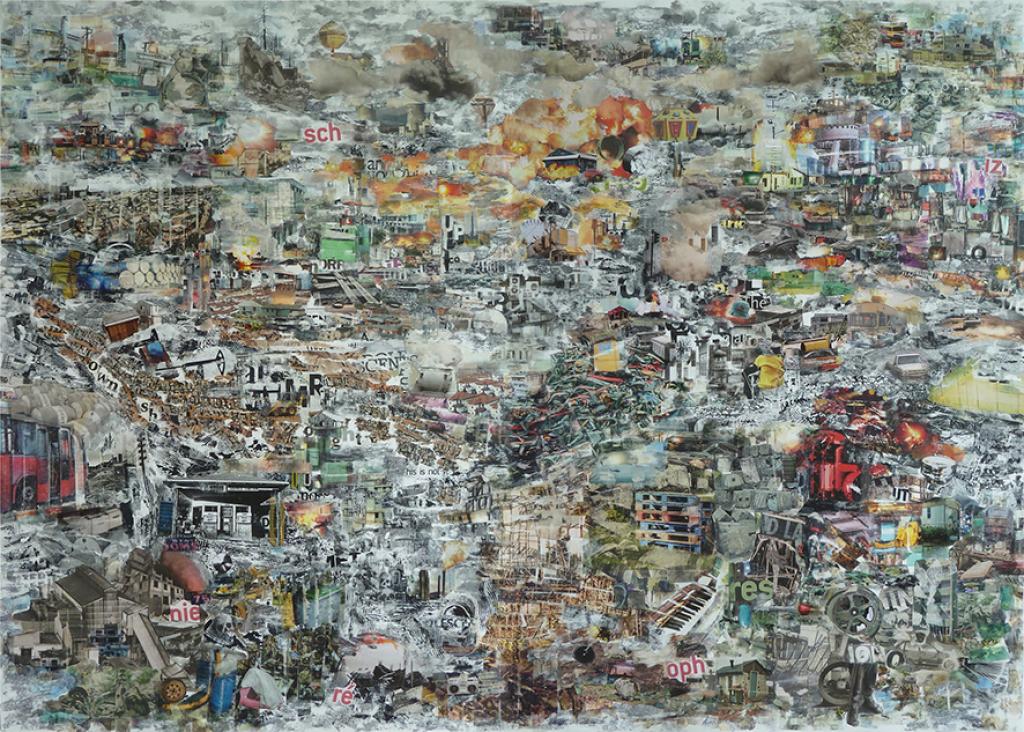 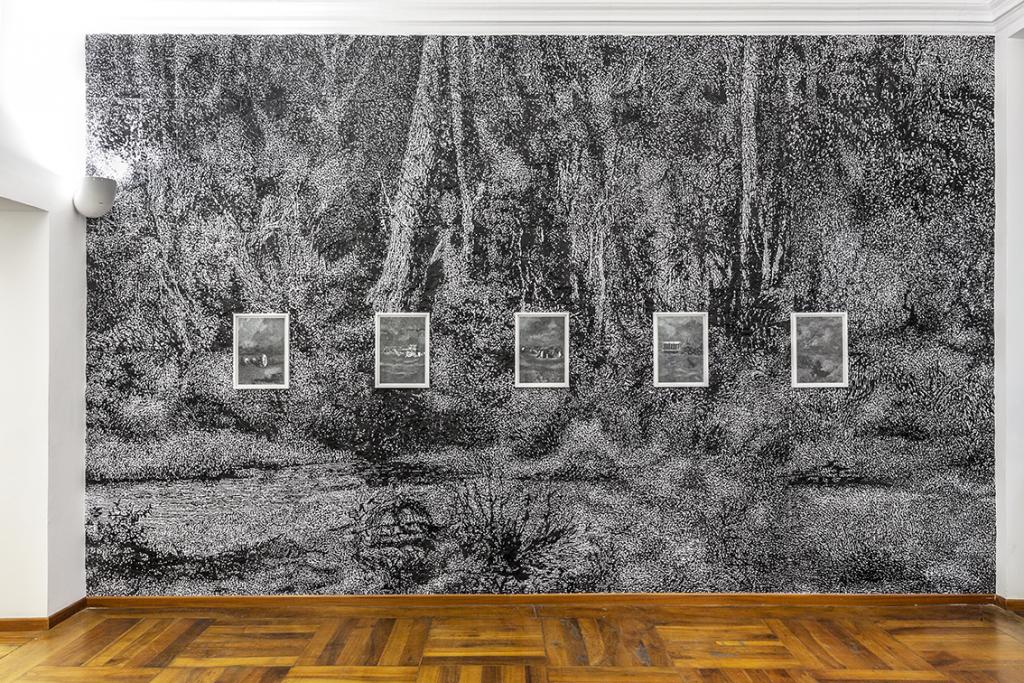 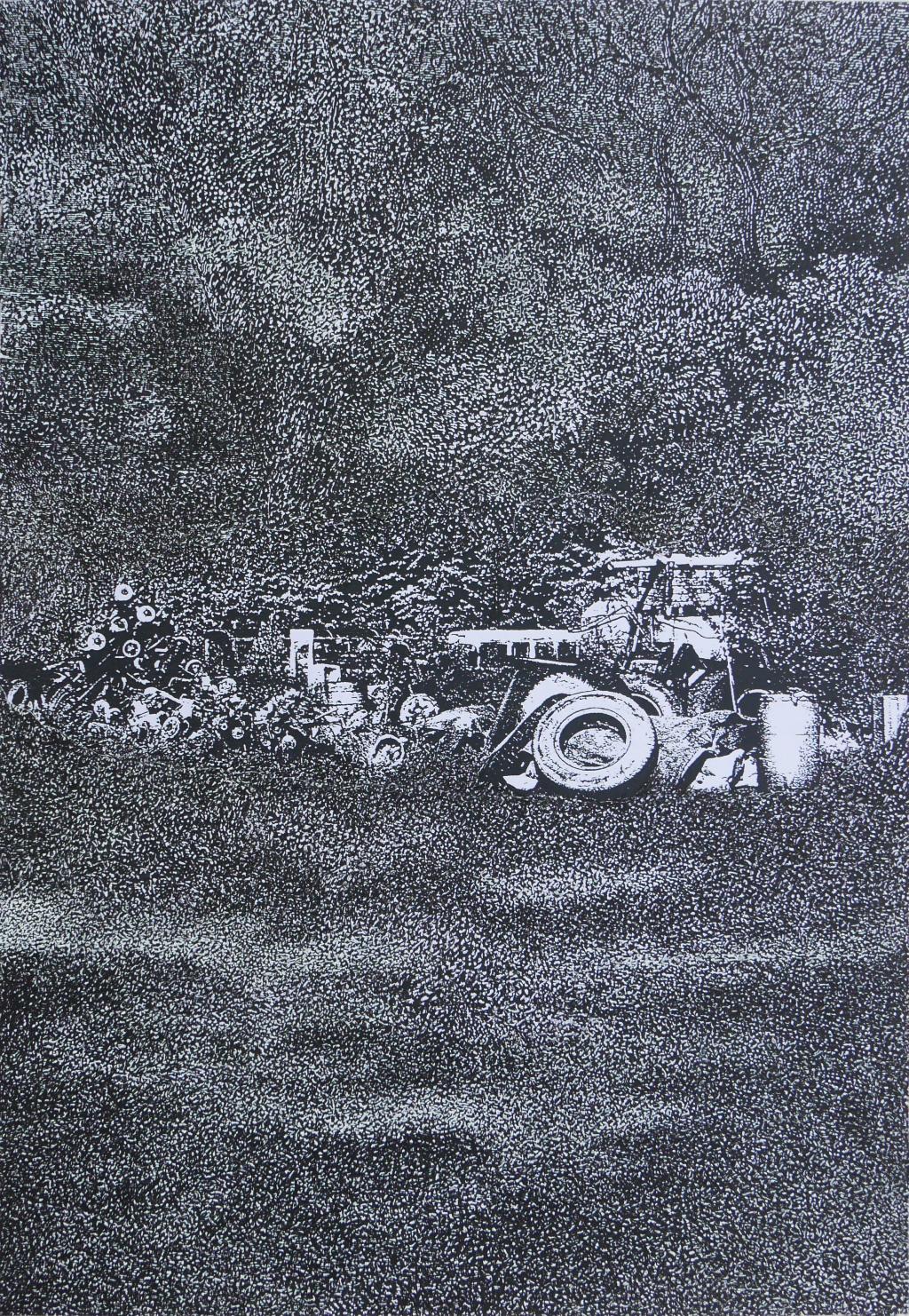 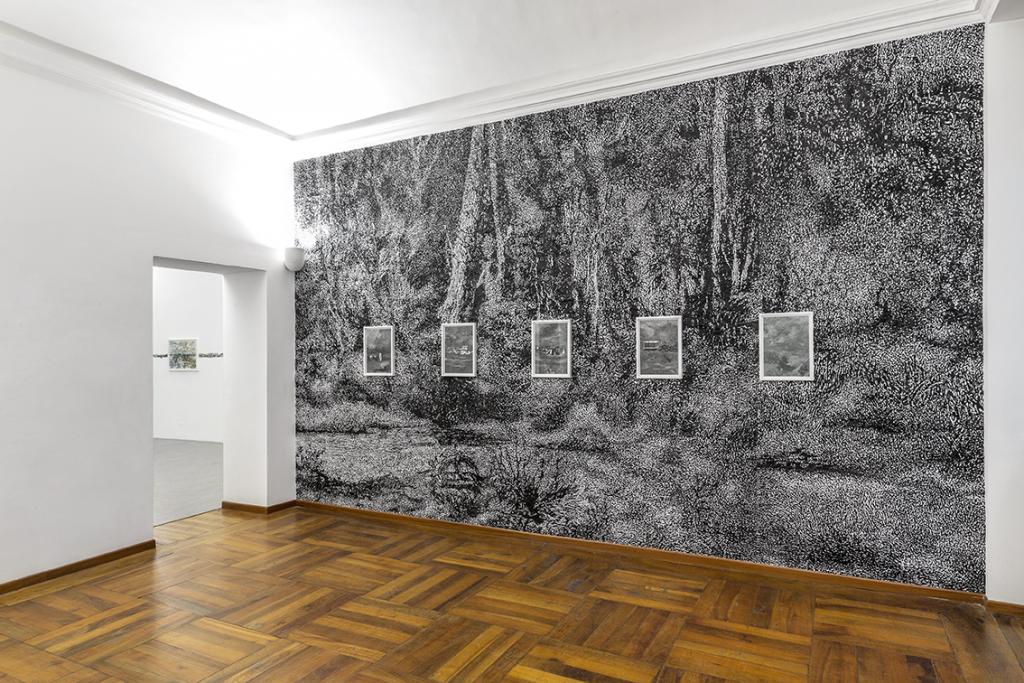 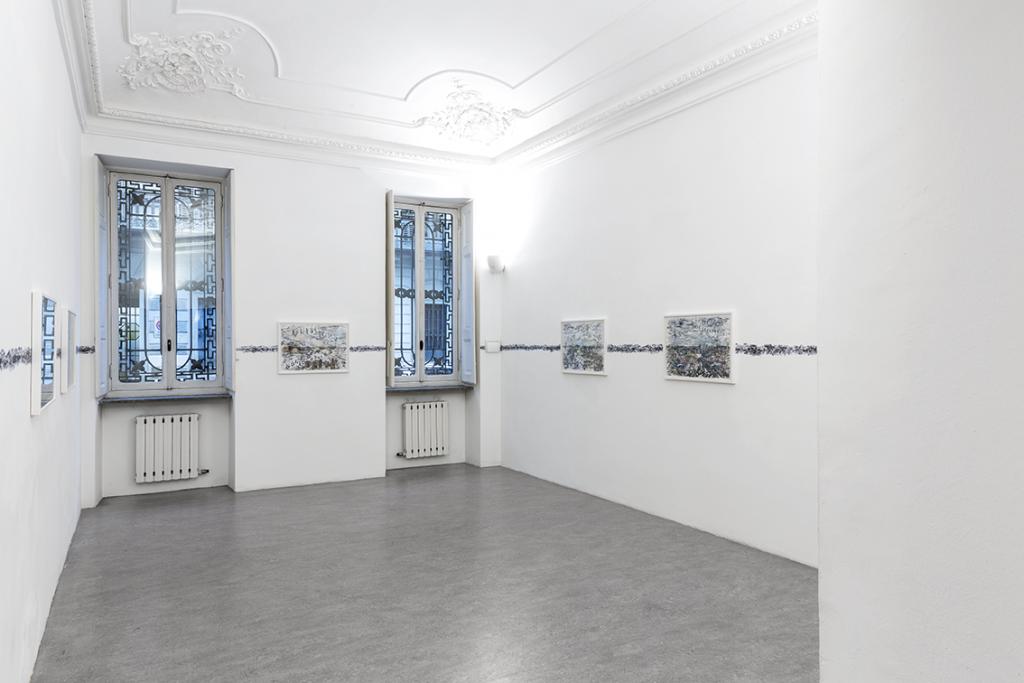 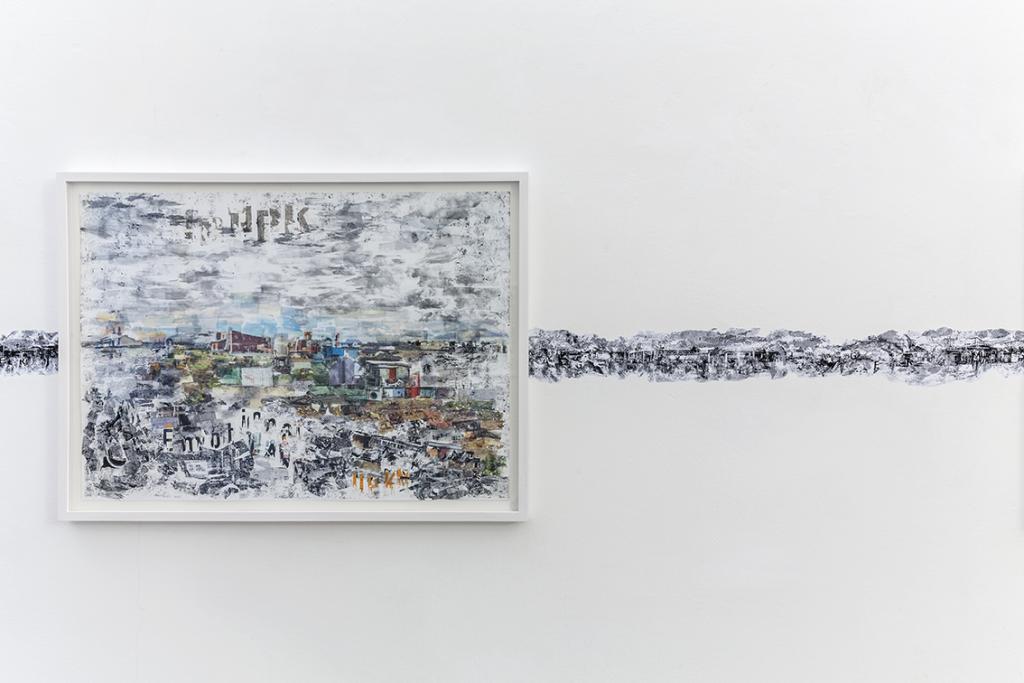 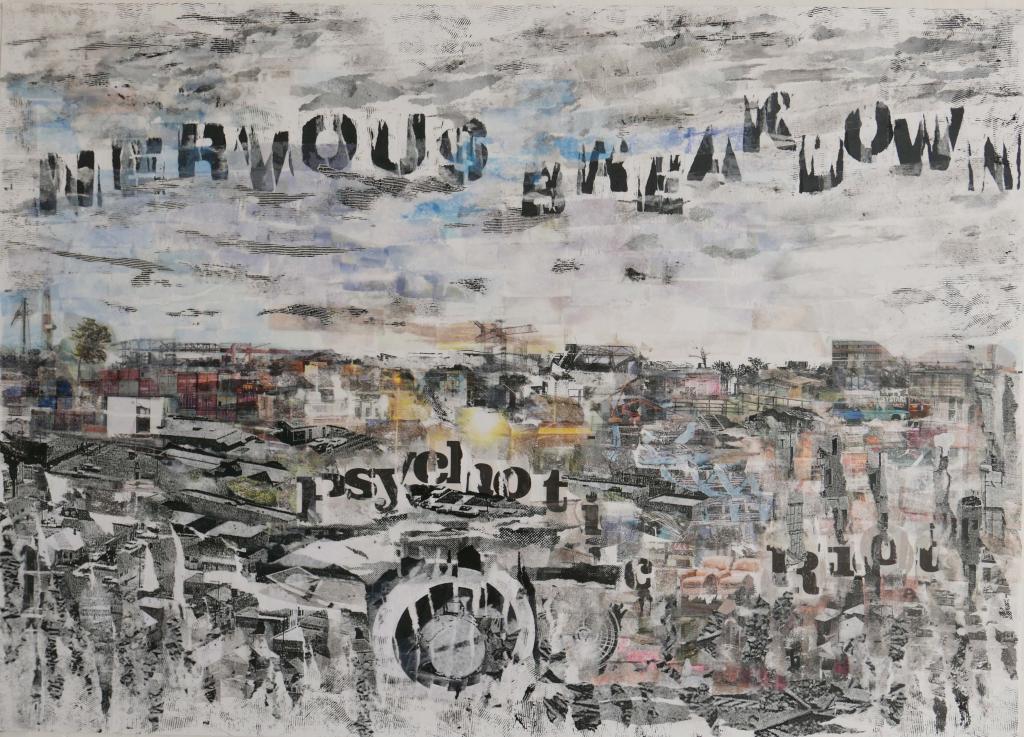 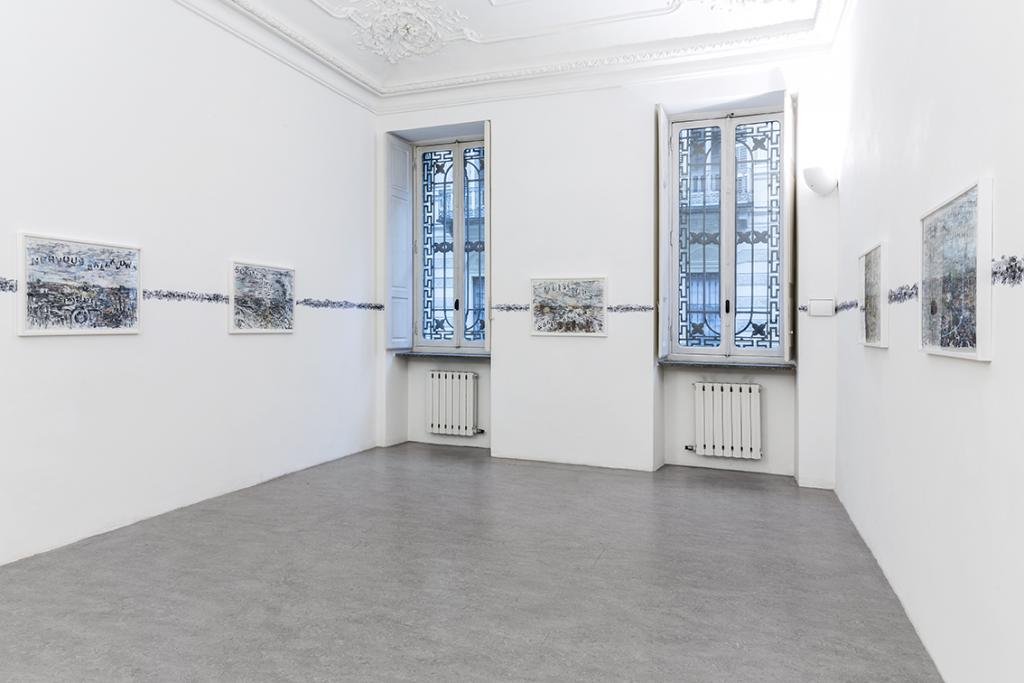 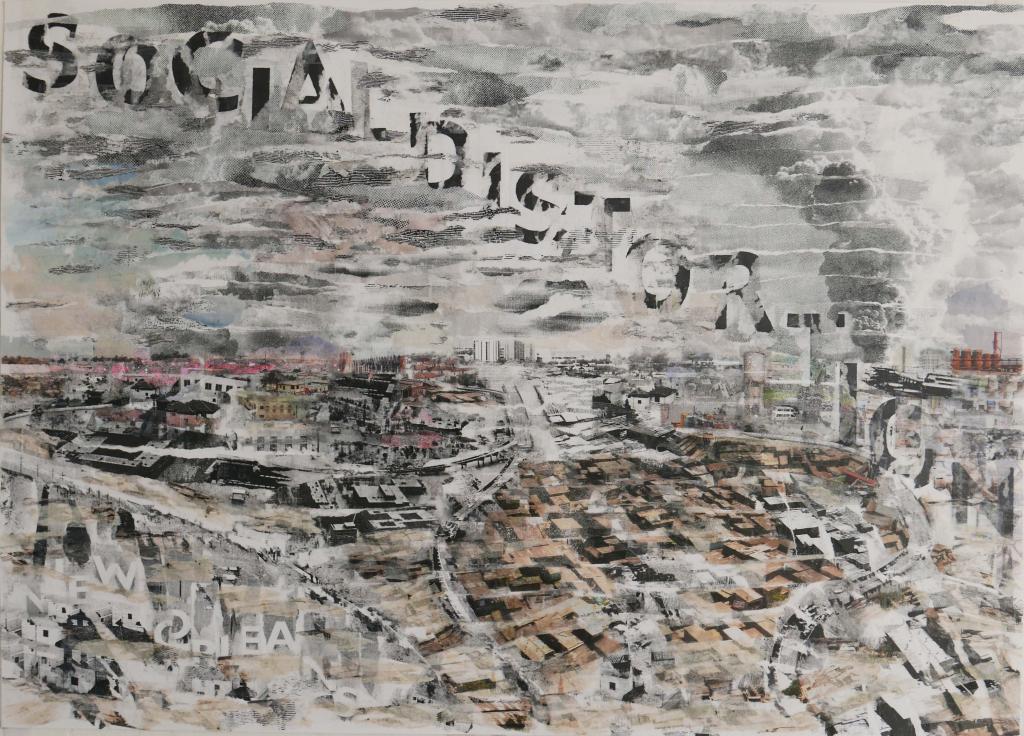 The title of the exhibition is White Noise, like Don DeLillo’s 1985 novel. It is also the title of the vast artwork that welcomes the visitors in the first room in the Peola Gallery. A Botto&Bruno artwork, no doubt – they have that special touch, that distinctive and unmistakable way of “constructing the image as if [they] were painting it” - which nevertheless looks like none of their previous works. It feels like they have widened their point of view and that what used to be in the foreground has moved away, thus multiplying the images.

These latter, however, are to be discovered within this apocalyptic landscape haunted by the literary device of the toxic cloud that disrupts the life of Jack, a university professor, as well as his family and his town, where things seem to run smoothly because, year in year out, the same events repeat themselves unchanged. When Botto&Bruno sent me the picture of this painting, my eyes zoomed in to inspect every corner of this decomposing world. In so doing, I found items belonging to the world of these two artists, items coming from the landscapes of the world’s peripheries – which, as we know, look very much alike. There we find a radio and its speakers, car tyres, dismissed busses, burnt-out cars, tin houses, silos, cranes, rubble, a keyboard, piled up stones, big and small blasts, fragments of bodies of men and women, while their faces are not to be seen (hiding eyes and facial expressions from view is a typical feature of this artistic duo). Then there are the words, black and white signs used to soften or enhance tones and timbres.

“Every little fragment of an image tells a story. It is a trace. Each of us can reconstruct their personal story according to their own life experiences”, say Botto&Bruno about this work, which is the outcome of a long selection of hundreds of magazines. Similarly, the making of the painting was a lengthy process. These artists demand an extensive time to create their work, and expect the viewers to employ a likewise extensive time to enjoy it. They are right: their works must be observed at length – once we would have said ‘contemplated’, a notion that, obsolete as it may seem, in fact should once again become common practice for any art viewer.

Thus, by means of contemplating this multi-layered world - a city that has become a gigantic periphery emanating heat, looking like it is melting, at the same time devouring objects and stories, buildings and the lives inside them – I also have reconstructed my personal story. Botto&Bruno’s work immediately overlapped with the novel I was reading and the two of them started to proceed hand in hand in my imagination. Each page of Exit West, the latest novel of Mohsin Hamid, author of The Reluctant Fundamentalist, was gradually taking on the acid colours of White Noise, with its quasi-hysterical lights and its unredeemable world. Both the two Italian artists and the Pakistani writer were talking about the same thing – what happens when a known landscape has morphed into a gigantic, mysterious animal capable of knocking down, grinding, banning the things we need and becoming a veritable trap. In other words, what happens if the winner is not the knight coming to rescue the princess, but the dragon with his fiery jaws wide open. In Hamid’s novel there are thresholds you can cross to reach distant places in search of a better life. The two main characters, made strong by their young love, escape first from their war-torn country and then from the refugee camps where they have to live in increasingly harsh conditions, and finally end up in a frightening London, where migrants and locals, those living in the dark and those living in the light, clash all the time. Music, a consolation for both, is banned. Listening to it means risking your life. Here, too, we find dismissed radios and keyboards, like in Botto&Bruno’s paintings. I imagined that the city they described in their White Noise, which was inspired by a novel, could accommodate other novels – not only Hamid’s apocalyptic one (which had become the backdrop to my viewing of the painting), but also Jonathan Franzen’s Strong Motion, Jonathan Safran Foer’s Here I Am. The list kept growing, as films started to spring to mind, too – the last scene in Robert Altman’s Short Cuts (inspired by Raymon Carver’s short stories) seems to happen immediately before the one shown in Botto&Bruno’s painting.

Now, if an artwork can take you to so many different places, it means it has gained the upper hand over you. By showing itself, it has created worlds. And I have chosen not to stop observing it, as I am confident this landscape will accommodate many other stories – not only mine.

Next, there is a vast black and white room where drawings dominate. ‘Unlike in the other works, we set off from the fantastic to eventually reach the real – it was like proceeding in a direction opposite to that we normally follow,’ the artists explain. Their point of departure is actually Verne’s Twenty Thousand Leagues Under the Sea and its period illustrations that these ‘serial collectors’ of images stored over time. The room, with one wall strewn over with crumpled pieces of paper, becomes a cave whose inhabitant, nature, is attempting to take back its own space. Here, too, the space set-up calls for slow pace –  thousands of small marks made with those paint brushes used for Japanese ideograms overlap with the old images that are gradually being enveloped in a vibrant, black vegetation, frightening, perhaps, but certainly spirited. In the centre there is a collage with typical Botto&Bruno themes. And you can’t help thinking that, if everything goes well, if nature is left alone, forgotten, hidden, then it will recover its true colours.

The last room is occupied by a long black and white frieze that occasionally expands, thus allowing the viewer to see the landscape reassemble. It called to my mind Xavier Dolan’s film Mommy. The director shoots his poignant investigation of a mother’s and her adolescent son’s painful lives in an 5:4 aspect ratio, an unusual size for a screen. Only when happiness seems possible, does the screen widens out as if from the boy’s very hands, which open the scene like a curtain. Botto&Bruno do something very similar: the size changes when there is room for happiness. And there they are to open the scene. These landscapes also bears the traces of an old illness, but, unlike the others, they seem to suggest a cure. The ending is open.To each their own.