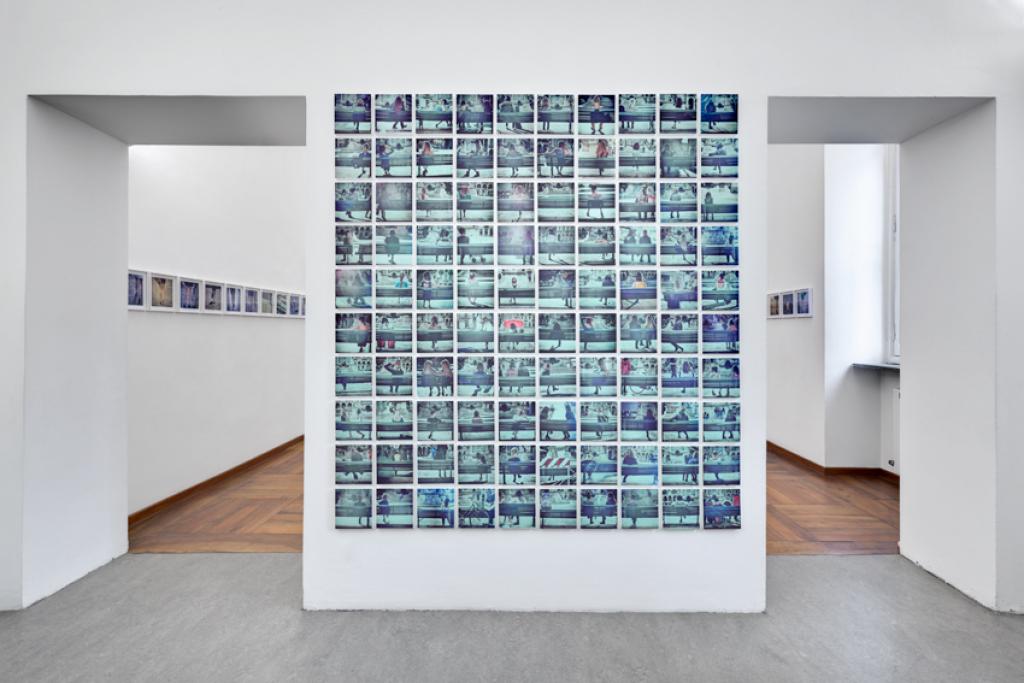 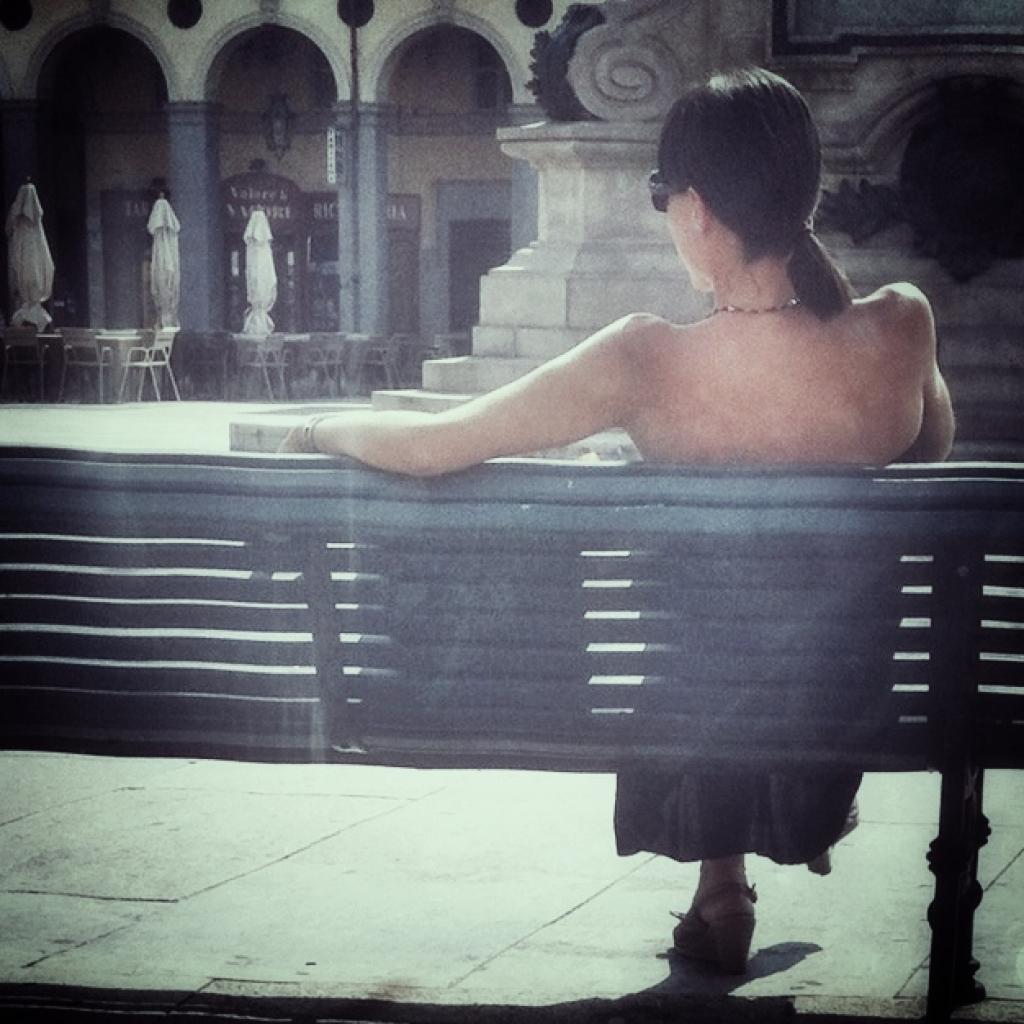 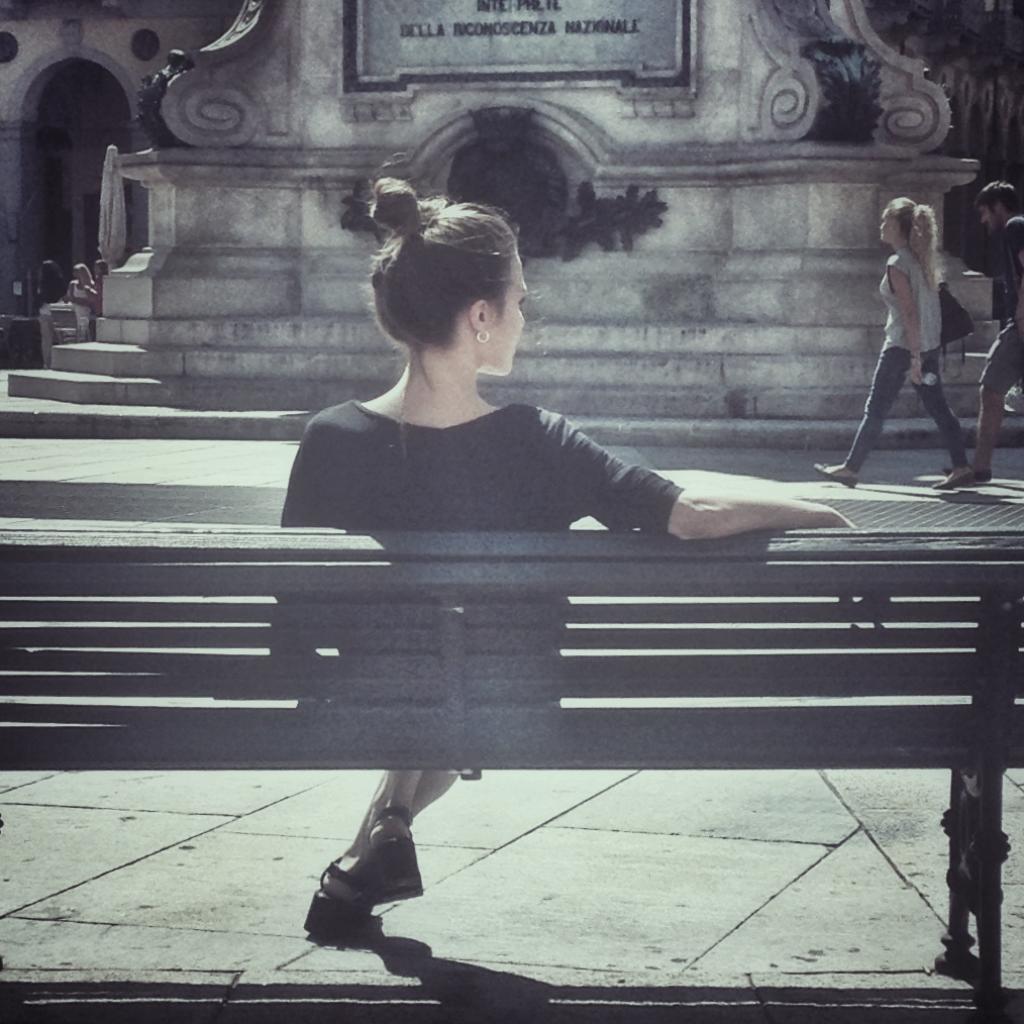 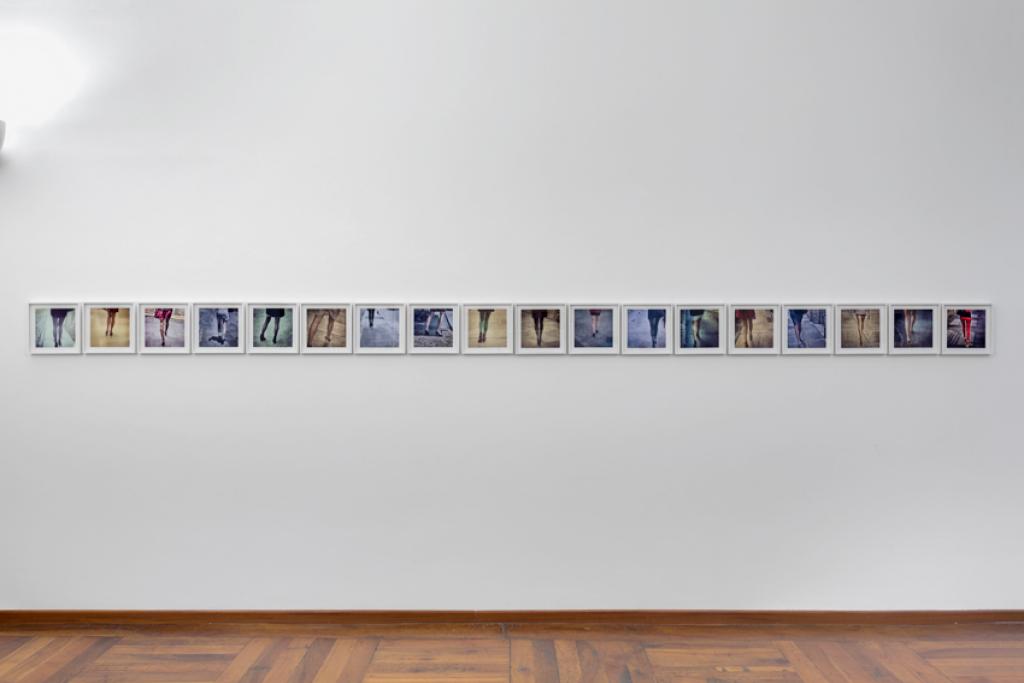 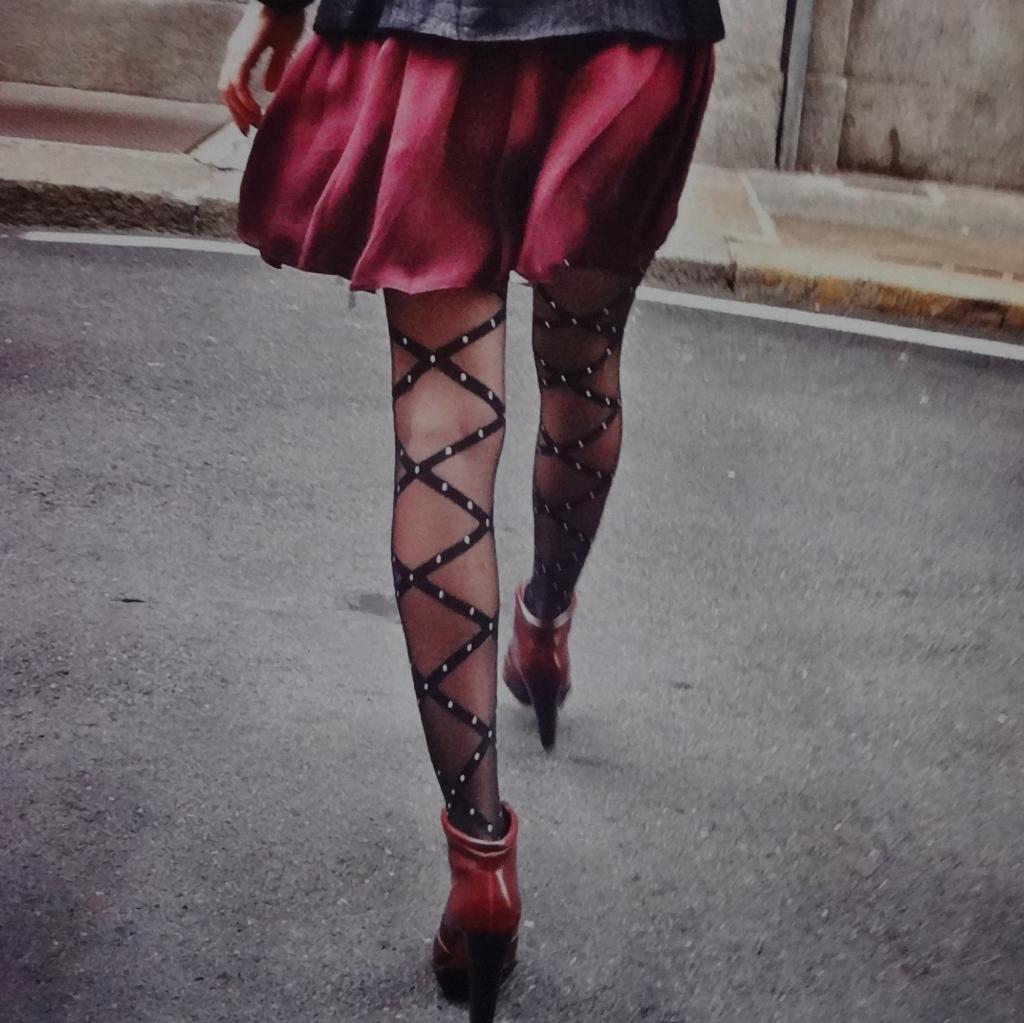 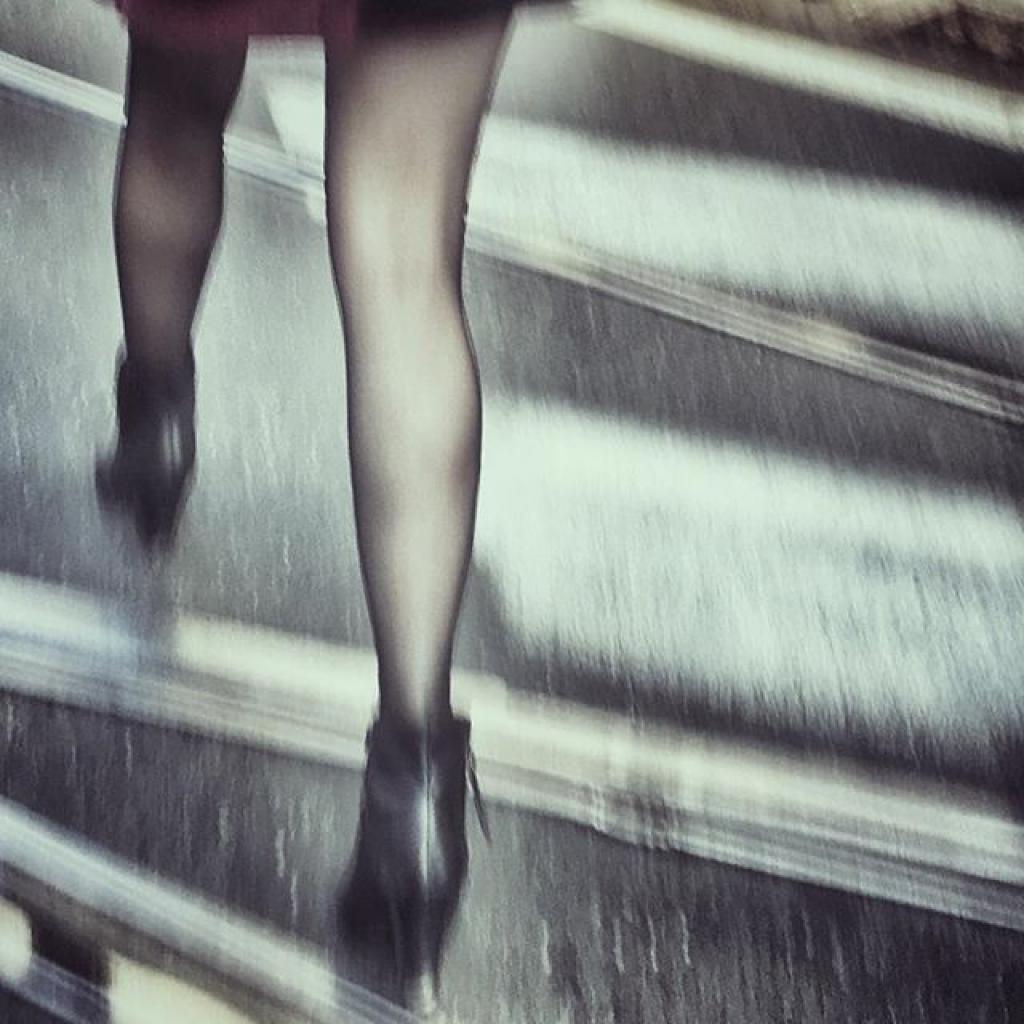 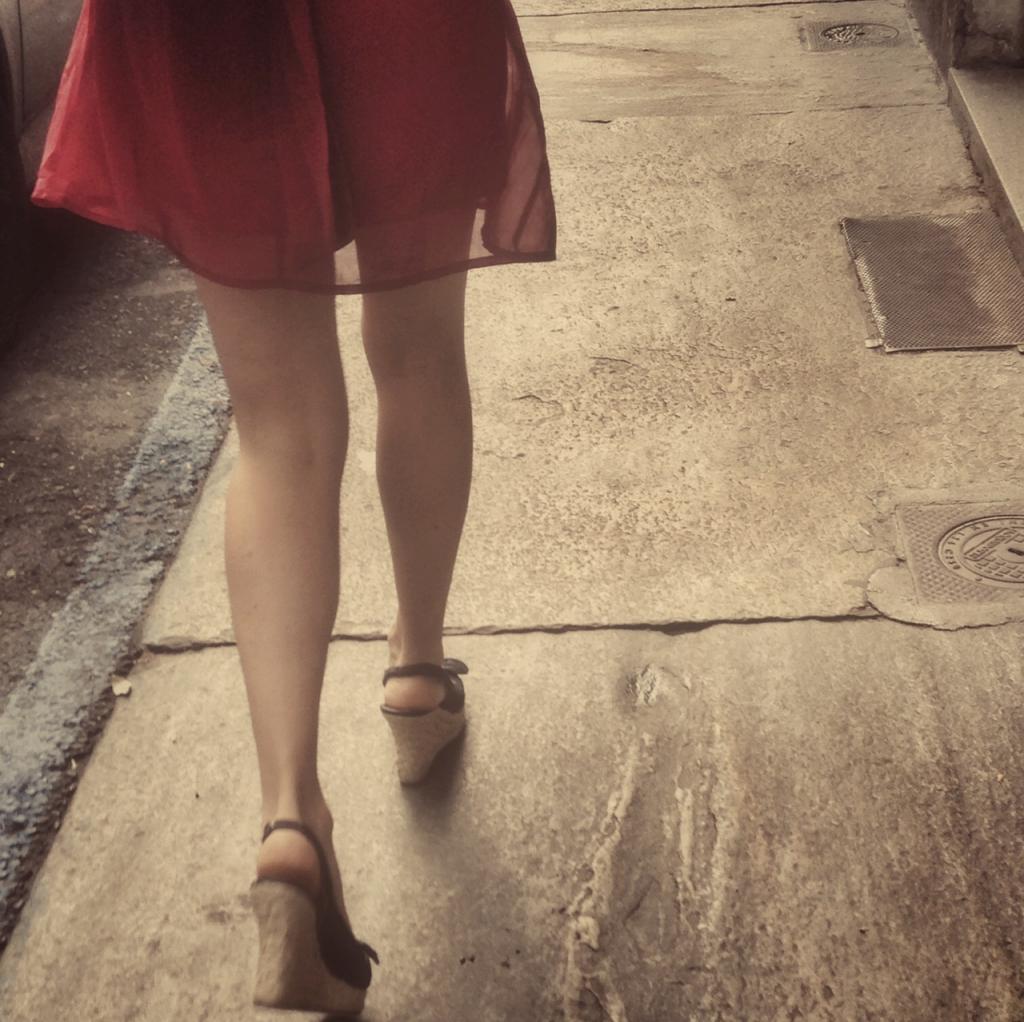 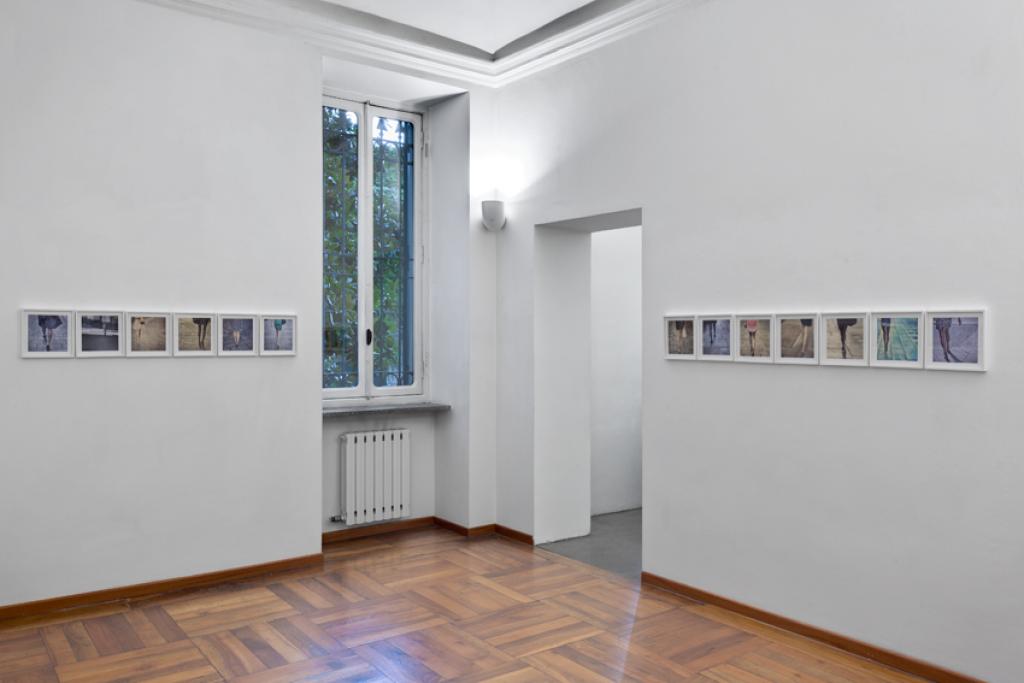 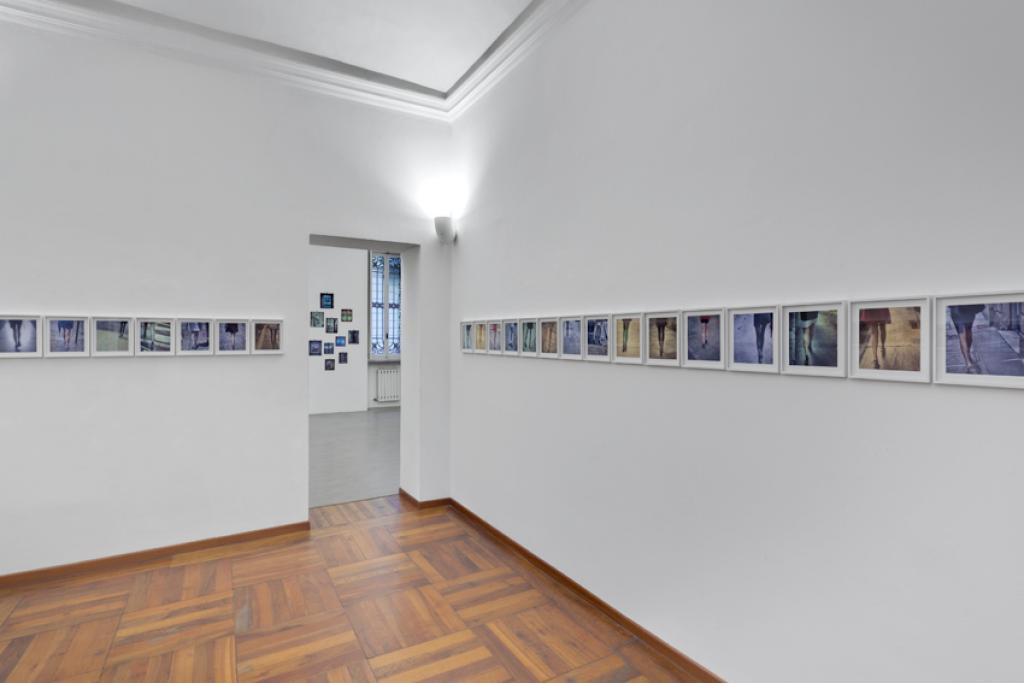 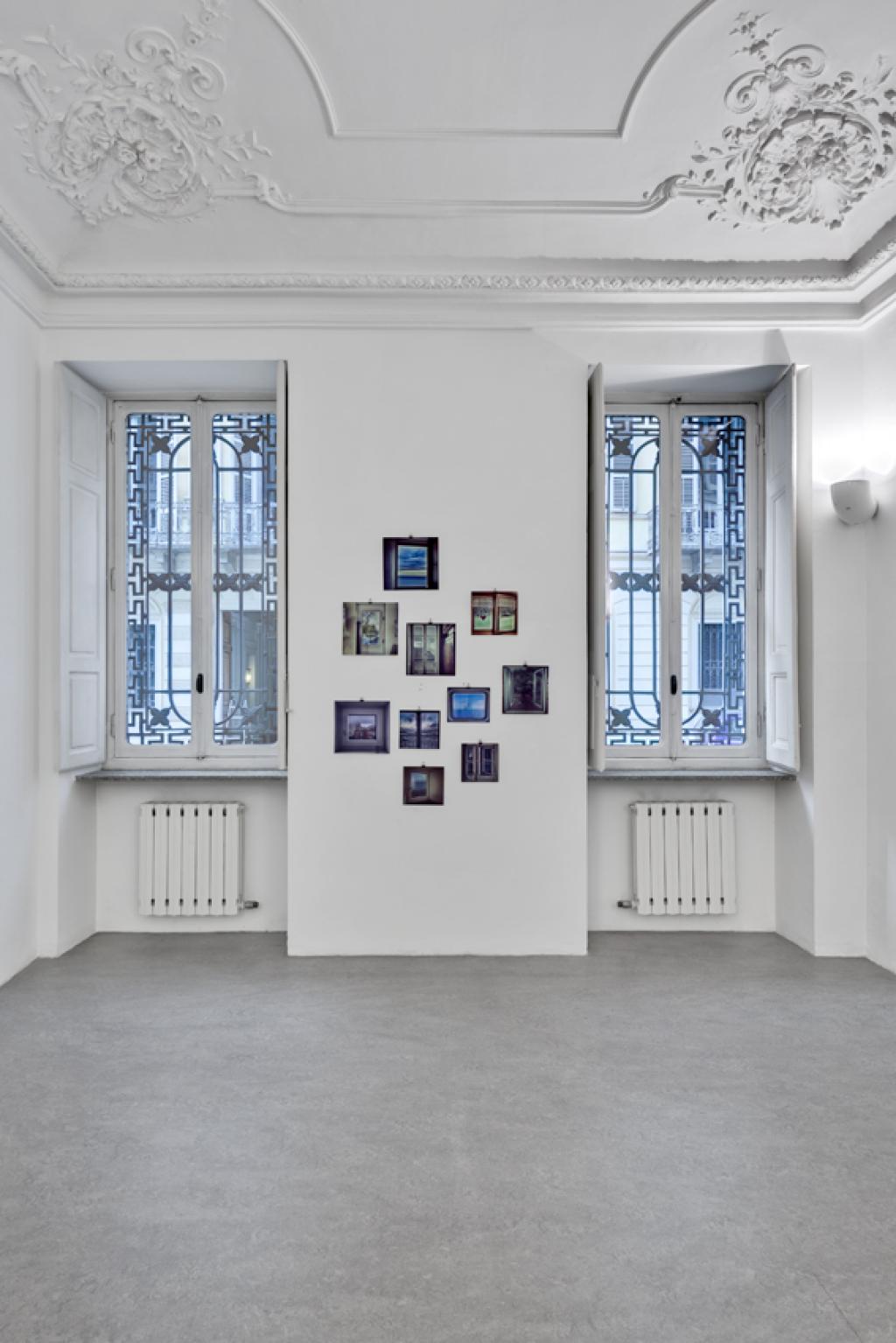 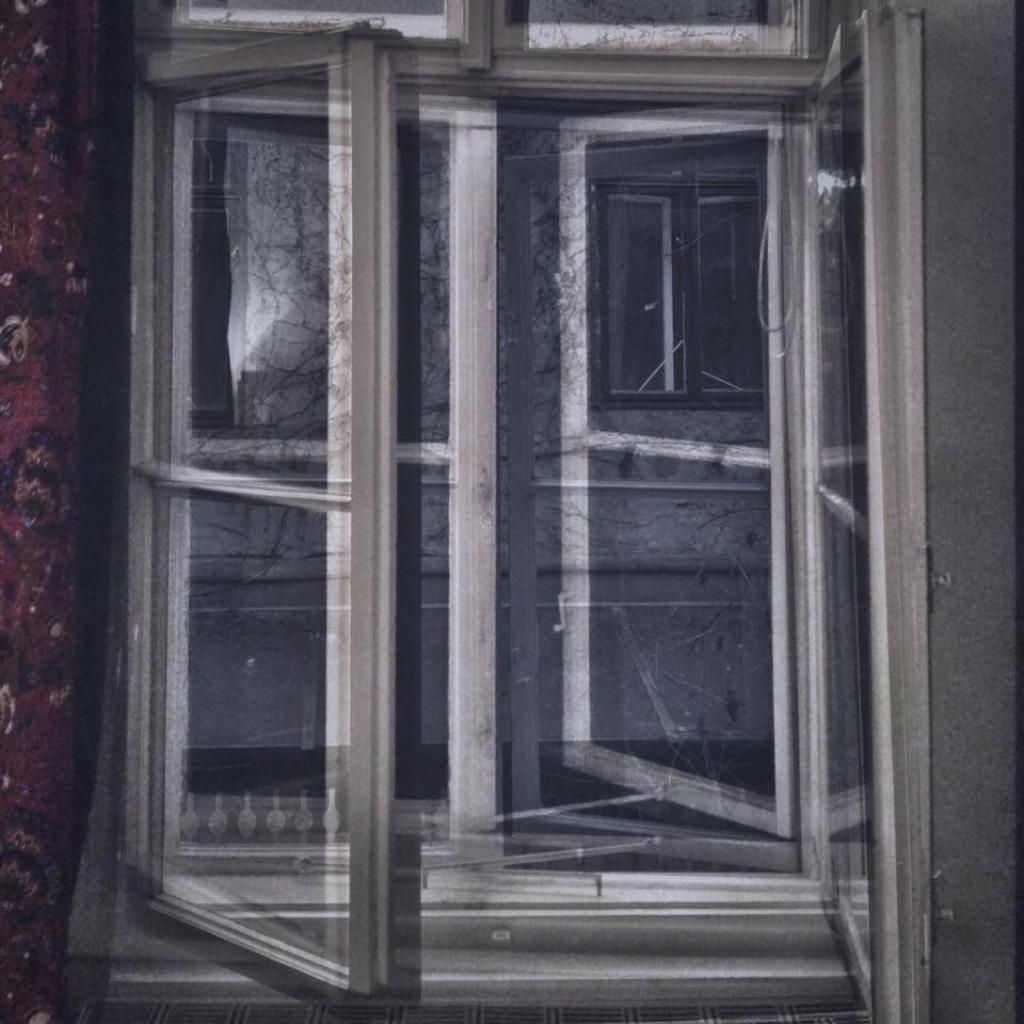 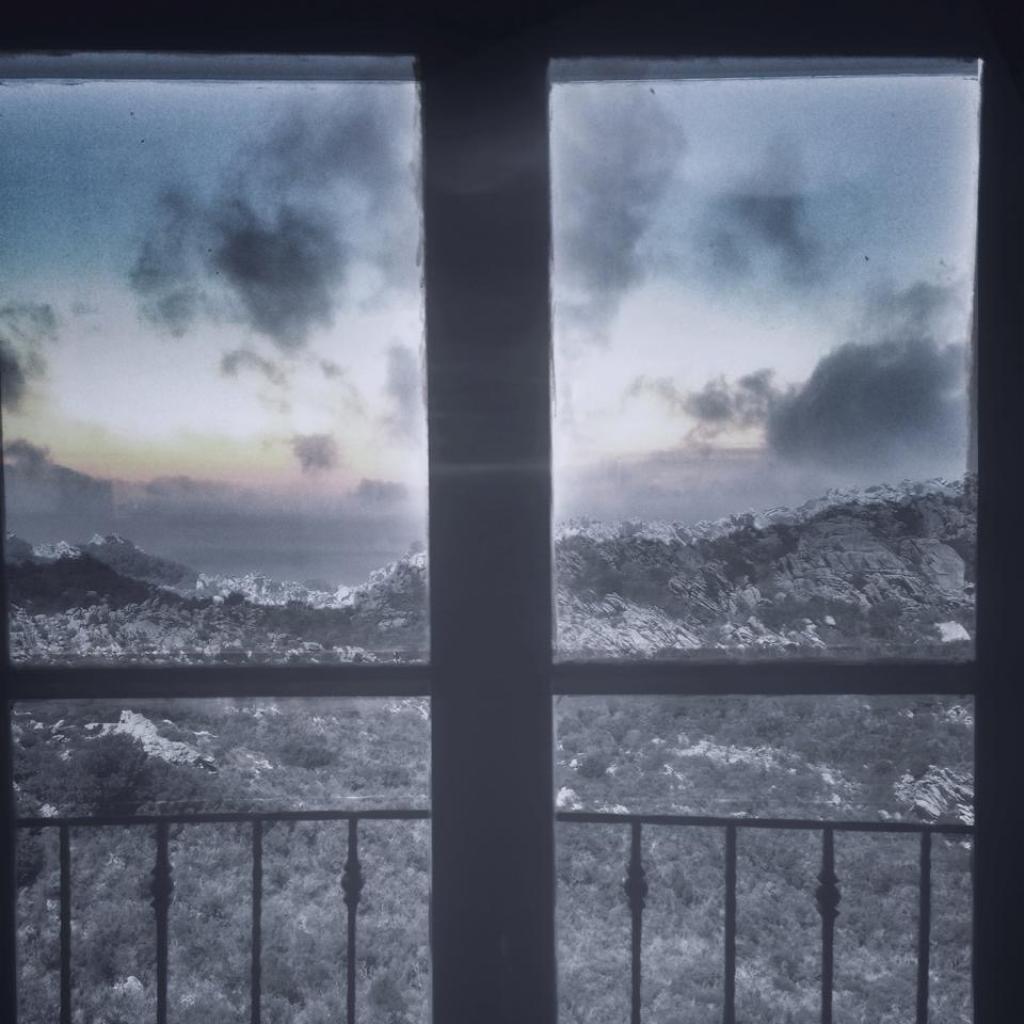 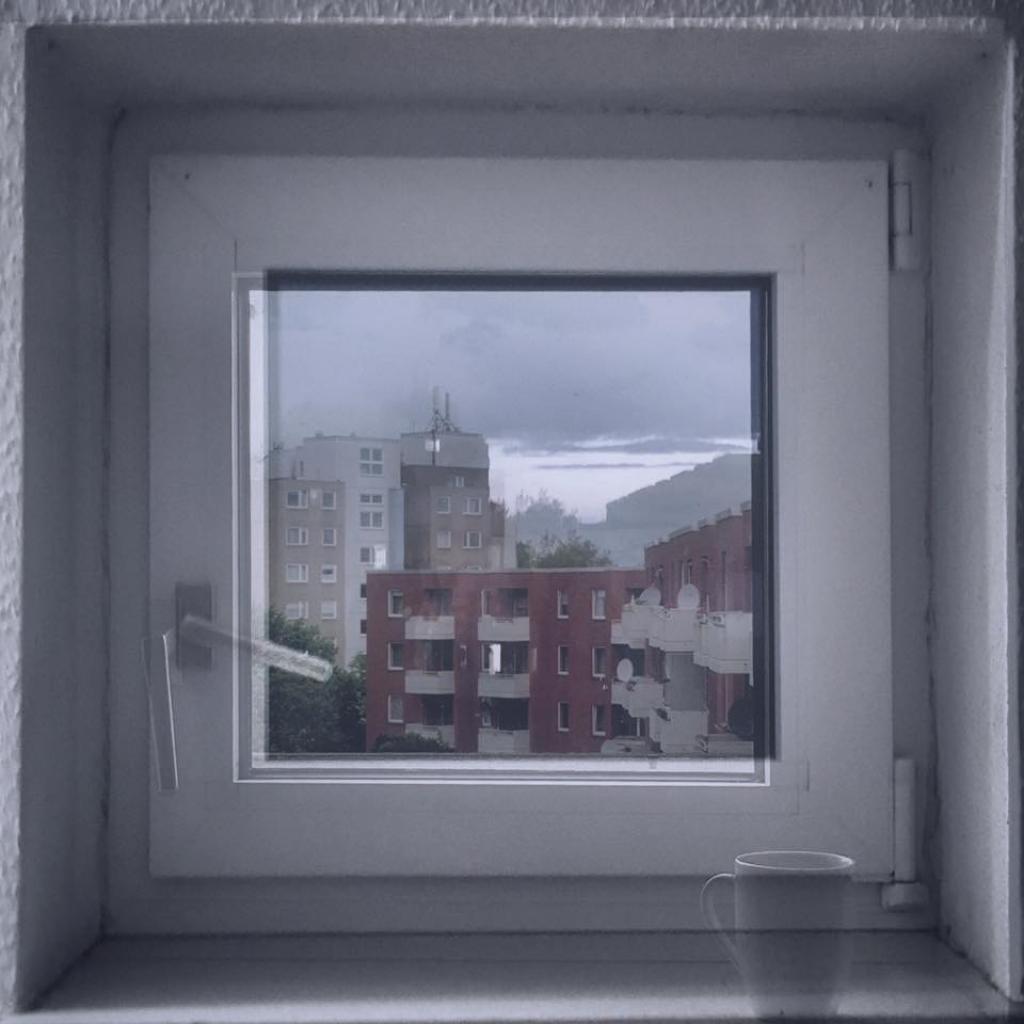 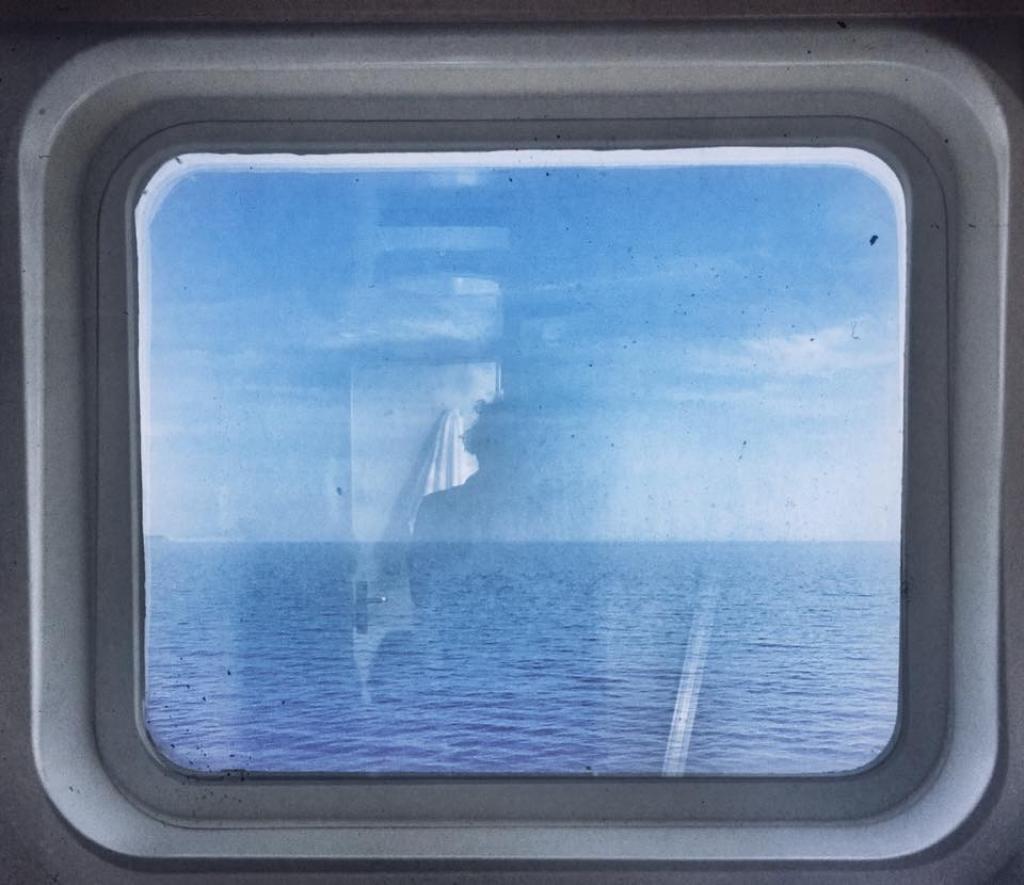 NOT HERE, NOT NOW.
Marco Rainò

There are legs, benches, windows; here, in these square-shaped snippets of vision, there are units of time that will never come again, there are moments that we had forgotten, similar but not identical to others that perhaps we had not considered valid, necessary, that we hadn’t pulled from the flow of everything before – the never-ending flow of everything.

For most of us, these photographs will help us to remember moments that we have never experienced. Through these snapshots, we recognize a general moment of everyday life, set in different scenarios, that concerns everyone.
The framing of the shot is instinctive, often in motion, formulated along the way that leads from a starting point to a final destination; the picture is taken "in the meantime,” planned in order to be unplanned, incidentally authentic or authentic because it is incidental.

The colors are dreamy, softly desaturated; lurid and warm at the same time.
There is a sense of suspension, of breath gently held, as one does when one wants to hear better, to listen carefully and precisely to the sounds or noises coming from the scene one is observing.
There is a widespread desire to abandon ourselves to what is happening before our eyes, which manifests according to autonomous wills, independent, unpredictable.

There is a definite, pervasive idea of ​​beauty, restless and - in part – heart-wrenching.

Simone Mussat Sartor photographs beauty, primarily - or exclusively? – feminine beauty, writing an autobiography for images made according to an "automatic," impulsive, instantaneous creative process. Every click of this intimate diary, shared publicly on Instagram, is the result of obsessive urgency; for its author, each photograph is indispensable and perhaps - in a way that’s not necessarily understandable - even therapeutic.
It is a ritual, a (creative) act repeated in sequences that follow other sequences, cyclical and continuous, brought to completion with the constant, acute sensitivity that dilutes the onset of a clear emotion in the single photo-portrait of a subject.

Remnants of intersections, of meetings, of clashes.
Images collected according to recurrent themes.

First.
An atlas of shots of young women in motion, almost always caught in the act of striding forward, in that split second in which action is governed by the instinct of the walk, by the authentic automatism that governs the choice of a trajectory; unconscious, common models, encountered by chance, freed at last from the violent constriction of the pose to assume "real" motion forward and not "realistic", natural or perhaps even human ones.
Their legs are sensual vectors, "compass points circling the globe and giving it its balance and harmony." (1)

Second.
An album of photographs of a circle of benches; different seasons, same place.
The stop in which a multitude of girls, sitting for a moment - the length of which one can only arbitrarily imagine - releasing tension, catching their breath, waiting.
In this moment of calm, of discontinuity, the images show the almost palpable density of their transitory thoughts – whether frivolous or substantial – that carries them elsewhere, making them absent presences in the urban void that they temporarily inhabit.

Third.
A collection of shots of domestic interiors; the main subject of the photo is the window, taken from the front, open or closed, overlooking external scenes by day or night.
Through the gap in the wall one can glimpse different places, while the interiors preserve the constant temperature of the intimate shelter or the place where the walls become solid brackets, able to separate or subtract any human presence from every other context.

Photography, the unconditional and non-negotiable sampling of a specific moment from a more general dilated time, is an instantaneous clot of a time that was life, a fraction of light isolated from the flow of existence that is not subject to the future, in the present, in order to bear witness to the past; the still image, the dizzying contraction between what was and what will be defines and records the paradox of not being - of no longer being - here and now, because “our time, the present, is in fact not only the most distant: it cannot in any way reach us. (2)
In the portrait of what is - or was - a precise "now", the connotations of a state replicate and then stop in an often enigmatic place, in which are preserved the many clues that suggest the feeling of "recognizing in the darkness of the present the light that, though it never reaches us, is constantly traveling towards us."(2) For this reason, one can also think of the photographed image as an expansion device for our perceptual abilities, an optical amplifier that allows us to see what, previously, the author had only been able to look at: the object discloses, the photograph reveals. "The nature that speaks to the camera is in fact different from the one that speaks to the eye; especially because, instead of a space consciously constructed or arranged by man, an unconsciously constructed one appears."(4) Through any image-capture tool - in this case, an iPhone that captures the moment, translating it into a digital code made up of millions of pixels - discovery hypotheses are constantly processed and defined, because a spark of chance always mixes itself in with the planned shot, an unexpected given that is the material through which "reality has inflamed the character of the image."(5)
What happens in the infinitely short moment of everyday life cannot be grasped in its entirety by the naked eye, but its recording in the format of a photo reinstates the size of a universe of previously imperceptible details, showing us the complexity of our optical sense, "infinitely multiple and simultaneously unified."(6)
Simon Mussat Sartor’s photos retain a significant portion of what Walter Benjamin calls pure unconscious optics:  “The camera introduces us to unconscious optics as does psychoanalysis to unconscious impulses.”(7)
Each click captures unconscious dynamics, camouflaged particulars, stopping them so that they can become noticeable, accessible, readable and perhaps - through subjective processes, each time different for each observer of the final image - interpretable; one looks at the photographs of Mussat Sartor with the ambition and the feeling - perhaps the illusion - of recognizing something - the subject, the context - because this attempt to codify will allow us to nurture other personal visions, which will take the tenuous yet powerfully vivid and concrete form of our thoughts, of our fantasies.

These images, in particular, are stimulating narrative gimmicks, because omitting the faces, expressions and identities of the subjects leaves us observers the space to define and build small or large patterns.

These images, in particular, in their almost unfinished enigmatic composition, are visual chronicles of a reality able to stimulate fiction.

These images are all, actually, precious miniatures of a single moment: one in which every defense is lowered, every convention is dissolved, every tactic is suspended; the deeply personal moment in which we are theoretically alone, isolated, disconnected, in the company of ourselves, not being - finally - present. Not here, not now.